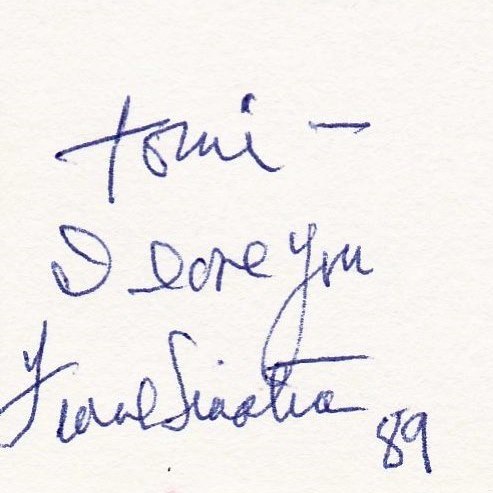 Hi,I have not been able to find out if Wernher von Braun ever sent out autopen/facsimile autographs. This is a 8 x 10 SP which has been sent with a letter from NASA.Could the autograph of von Braun…Continue

Hi,Please, help me in authenticating this album. I have got it from a person who says he has got the autographs in-person while the band visited Finland.Side 1 seems to have Bruce + somebody elseSide…Continue

Hi,Sergio Mendes introduced Elton John in his "Sergio Mendes Show'70" Tour in 1970. I'm having a program booklet from that tour signed by Mendes (on his own photo) and also autographs of the band…Continue

The Beatles - genuine or not UPDATED

Hi - I just found this on the internet. The seller says these to be genuine. There are so many real Beatles experts here, so I'm counting on your judgement. Thanks!…Continue

Mr Mojo Risin replied to 00700's discussion Keith Richards? The Rolling Stones in 1970 in the group Rock, Pop, Blues and Jazz Autographs
"Beautiful item.  CHARLIE written Rolling Stones. I would this for me. "
May 28, 2020

00700 added a discussion to the group Rock, Pop, Blues and Jazz Autographs

Keith Richards? The Rolling Stones in 1970

Hi - I just bought in an auction here Finland a piece of paper with autographs of The Rolling Stones. The band had their first ever Stadium concert here in Helsinki at the Olympic Stadium in September 2, 1970.At that time it was quite easy to get near to the stars as the video shows: https://areena.yle.fi/1-50115690The paper has been signed by Mick Taylor, Mick Jagger, Charlie Watts and Bill Wyman. But could "The Rolling Stones" have…See More
May 28, 2020
2 Comments 0 Likes

Steve Cyrkin, Admin replied to 00700's discussion The Beatles Signed Photo: Genuine or Not?
"Domino, Anyone who thinks it's OK to talk to other members like you did is someone I won't allow to be a member. You are permanently suspended."
Jan 15, 2020

Domino replied to 00700's discussion The Beatles Signed Photo: Genuine or Not?
"Your full of s*** you own the cards not the machine once again klown pen plotters did not exist till late 80 with multiple pens facts i know i do cad you dont so stfu"
Jan 14, 2020

fab432 replied to 00700's discussion The Beatles Signed Photo: Genuine or Not?
"Here is a pic of a machine that was used in the 1950’s - 1960’s.  The Beatles signatures were done one at a time thus the various positions on the signed cards. The operator could simply change the pen in between the individual…"
Jan 13, 2020

fab432 replied to 00700's discussion The Beatles Signed Photo: Genuine or Not?
"I think your statement is incorrect. I have had many Beatles Autopen signed cards and several have had black and blue ink. Most have the same ink but two or more different ink is not uncommon. And all the photos posted by Jim are autopen autographs."
Jan 13, 2020

Domino replied to 00700's discussion The Beatles Signed Photo: Genuine or Not?
"Do your research on autopens one has two color inks the autopen only held one pen at at time no one sat thiet and pushed thru cards twice "
Jan 13, 2020

Jim Cushman replied to 00700's discussion The Beatles Signed Photo: Genuine or Not?
"Sorry....the photos are all autopen....none of these were signed by The Beatles. "
Jan 13, 2020

What kind of member are you? (Check as many as apply.)
Collector, Other Professional

What would you like to tell us about yourself, your collecting, or business.
I'm a long time collector and have been a member in The Universal Autograph Collector's Club since the 1980's. I have a wide collection which I'm selling at the moment: www.elisanet.fi/kokoelma

What is your level of expertise?
Advanced Collector, Professional

Why do you want to join Autograph Live?
Great pages!

Who can we thank for telling you about us?
internet

Why do you collect?
The best hobby in the world

What is your favorite autograph in your collection?
There are so many

You can ask anyone living or dead for their autograph. Who would it be?
Too many to name