There were three autograph things today relating to athletes, so I thought I’d slap out a little blog about them.

The first came when I woke up, turned on the TV, and saw a commercial with Rams running back Todd Gurley. He’s not a guy I like, but for the stupidest of reasons. I could’ve drafted him in my Fantasy Football league last year, and I picked Chargers RB Melvin Gordon instead. He didn’t score a single touchdown! (and it pains me too much to research how many TDs Gurley got)

Anyway, the Rams are back in Los Angeles, and there were two nice things about this Carl’s Jr. commercial. First, they used comedic genius Jay Mohr. He plays his agent (and played an agent so well in Jerry Maguire). If you get a chance to hear his sports show, or see him do stand-up live, you should. Not to mention the fact that he signs autographs after the show, so that’s a plus.

In the commercial, Gurley is seen signing a football and tossing it back to a fan. Kind of funny, considering the fact that if somebody handed him a football, they’d probably be standing right next to him to get it back. They wouldn’t be far enough away that he’d toss it. But hey...it was probably one less actor they had to pay.

I remember interviewing Chargers quarterback Stan Humphrey’s in the early 90s, and he and I tossed a football around, but I never had him autograph it. The only item I had in the studio was a photo of the Chargers cheerleaders (please, don’t judge). So, I have that photo somewhere, with his signature on it (and he had to sign over the two prettiest women, but I digress).

At one of the Indian casinos, Raiders Hall-of-Famer Tim Brown made an appearance about 8 years ago. I brought a football for him to autograph, but I told him before he signed it, I wanted to throw him a pass. I said, “I like the idea of someday telling my grandkids that of all the great catches you made, one of those was on a pass I threw.”

He stood up from the table he was at, ran a short route, and I hit him right on the numbers. Well, right on the tie. He was dressed in a suit. Now, speaking of throwing passes, the NFL teams are showing up for workouts. My friend Carolyn is a huge fan, and she was a the Chargers practice today. She got a lot of autographs, even from her favorite player -- future Hall of Famer Philip Rivers. 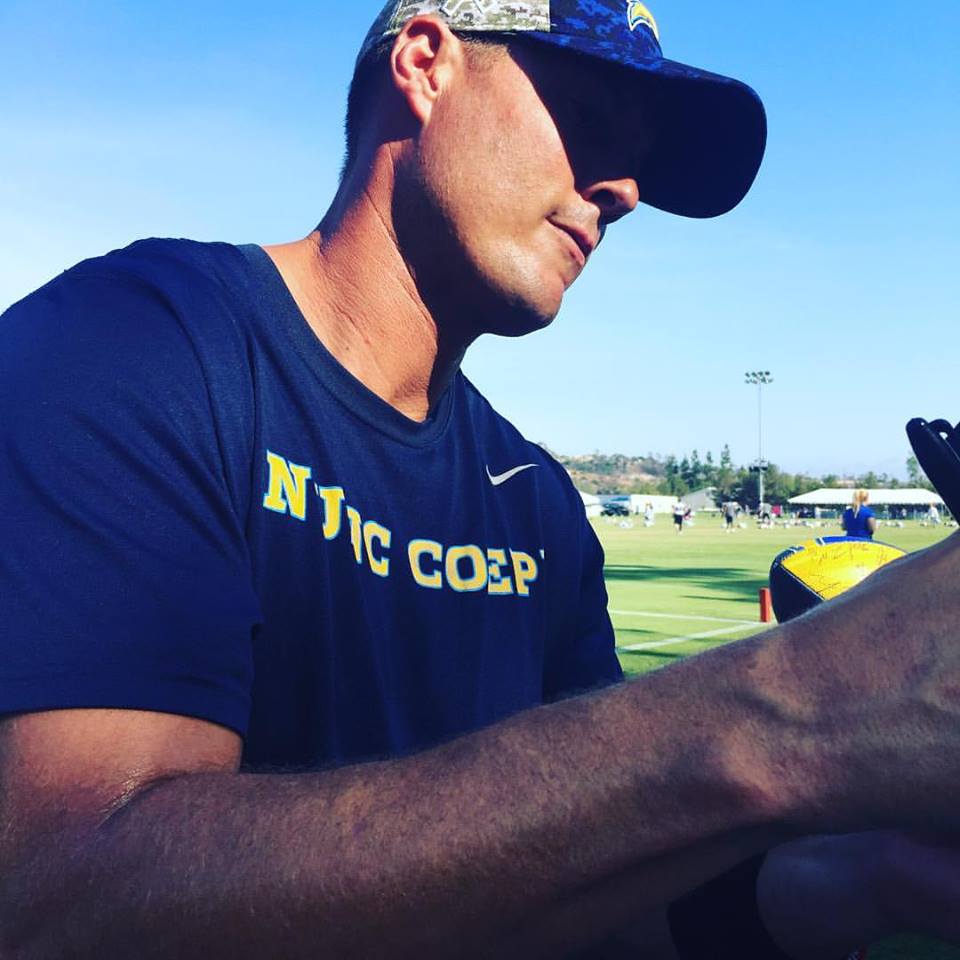 But my favorite autograph story was all over the news.

It was the 7th inning of a Cincinnati Reds home game against the Cardinals, and Reds first baseman Joey Votto went into the first row trying to catch a foul ball. An overzealous fan accidentally hit Votto’s elbow, causing him to drop the ball. It would’ve ended the inning, and Votto was furious. He stared at the fan and then grabbed his shirt, right near the Reds logo. It was a subtle...or not so subtle...way of pointing out to the fan -- you should’ve let me catch the ball and get this guy out!! Either Votto felt bad about how he acted, or the teams PR department stepped in. Between innings, he signed a baseball with a note on it, and also took a photo with the guy. Votto said, Nice read Josh!  Just a little edit- Joey Votto not Votta.  Votto is a pretty passionate ball player and tends to do this sort of thing a lot.  Last time he faked a fan out of a ball (motioned as if he was going to give him the ball and kept it)