The relatively short career of Nirvana limits the number of items available for collectors, particularly items that are originals. Buyers seeking original signed items should be aware that the rarity of these items has increased the likelihood of fraudulent items being sold on the market. Before purchasing originals signed items, buyers should research the item and ask sellers to thoroughly substantiate their claims of authenticity. This often includes any supporting materials that can track an item’s provenance and establish a link directly to the band.

With the advanced printing options available, it is unfortunately easy to fake an autograph... Buyers interested in authentic Nirvana autographs should be thorough when researching the background of any autographed item they may purchase. Some buyers, however, are interested in items that contain a reproduction autograph which is perfectly acceptable on the market if a seller is forthright about the autograph’s origin. When in doubt, the best practice is to ask questions about the history of a piece. Also ask opinions from fellow members on AML.

Back around November of 2012 a Nirvana Hormoaning Australian original EP CD signed by Kurt, Dave and Chris released in Sydney on Feb 5, 1992 was offer for sale on EBay. The seller is an Australian celebrities photographer Richard Simpkin. 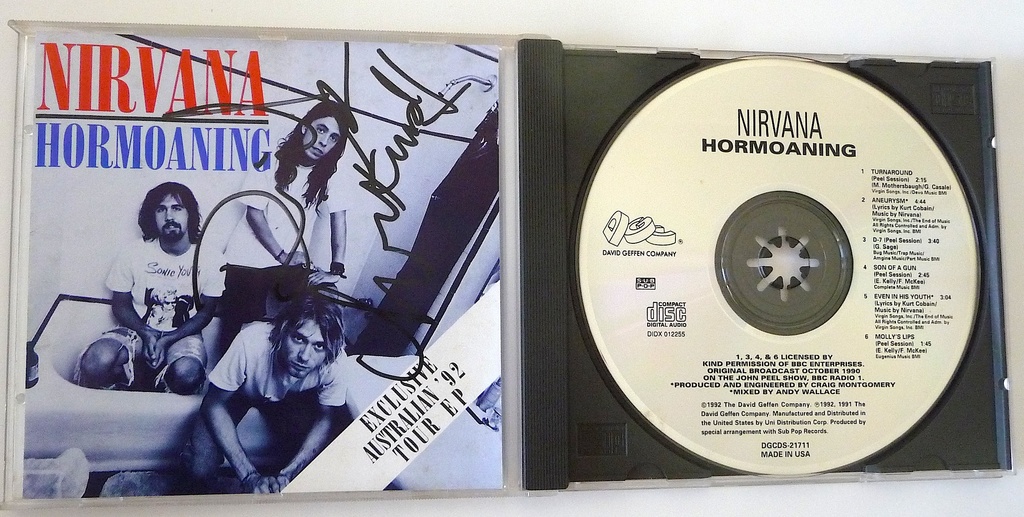 Below is the description on the auction.

This is one of the rarest signed Nirvana items that you will ever see.

I met them when they were in Sydney Australia in 1992 when they were here to do some shows. I found out that they were staying at The New Hampshire Hotel in Sydney's Kings Cross which is our Red Light District.

I knew that they had released an Australian only Tour EP so I went out & bought it, I then waited at their hotel & got the three of them to sign it.

I took photos of the band the day that I met them & have posted them here.

Hormoaning CD was released in Australia on Feb 5, 1992.
I got it signed on Feb 7 1992 as they were leaving their hotel for the gig, after the gig their Australian tour had finished & they left the country, meaning that there was only two days to get this signed.

After this 92 tour they never visited Australia again making this signed CD possibly the only one ever signed by the band. (I’ve looked for years for another & have never found one signed).

It’s the official Australian 92 Tour EP, not a reprint & not a re - release.

I've been meeting celebrities since 1989 & have a book & exhibition called; Richard & Famous.

In 2007 I sold my autograph collection at Bonham & Goodman in Melbourne Australia, I have attached a photo from The Sun Newspaper who did a feature story about my collection.

I kept a few items for myself but I am now selling them as we just had our first child & its now time to make way for him :-)

Please feel free to visit my website richardandfamous.com or Google my name; Richard Simpkin or Richard Simpkin Richard & Famous, you'll find plenty of information about me.

Hormoaning is an EP by the American grunge band Nirvana. It was released on February 5, 1992 through DGC Records and Geffen Records. It was released in Australia and Japan only, during the band's tour there.

This auction was posted by a forum member of AML in November 2012 about the authenticity of this signed Nirvana Australian EP CD. The description posted by the seller has very strong provenance as well as photo proof of the event on Feb 7, 1992. I was still skeptical of the authenticity of this piece that was being offered and it started my journey to try and research and find more information about it.

Hormoaning is an EP by the American grunge band Nirvana. It was released on February 5, 1992 through DGC Records and Geffen Records. It was released in Australia and Japan only, during the band's tour there.

In Australia, 15,000 official copies were released: 4,000 on burgundy 12" vinyl, 10,000 on CD, and 1,000 on cassette. There were two different pressings of the Australian CD, one with a silver CD and one with a blue CD. In Japan it was released on CD in large quantities. The Australian and Japanese releases have entirely different artwork. The Australian version is considered rare due to the limited numbers.

There were only two official Japanese pressings, both on CD with barely noticeable variations in artwork. The Japanese CDs were rushed out without prior consent from the US parent company and as a result the cover art is taken from the inside artwork of the Nevermind album. 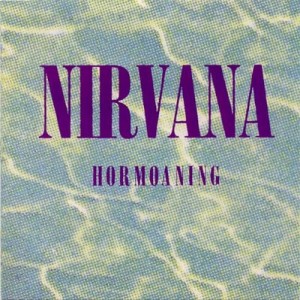 All Japanese vinyl copies are counterfeit. Counterfeit versions of the Japanese CD's also exist and the Australian blue CD version has also been counterfeited. The Australian silver CD is the only official version of which counterfeit copies do not exist.

The markings, artwork and silver CD on this signed Nirvana Australian Hormoaning EP CD confirms that it is the 1st pressing CD. This CD was Made in USA. Later reissue were Made in Australia. This CD by itself is a highly collectible rare Nirvana CD. 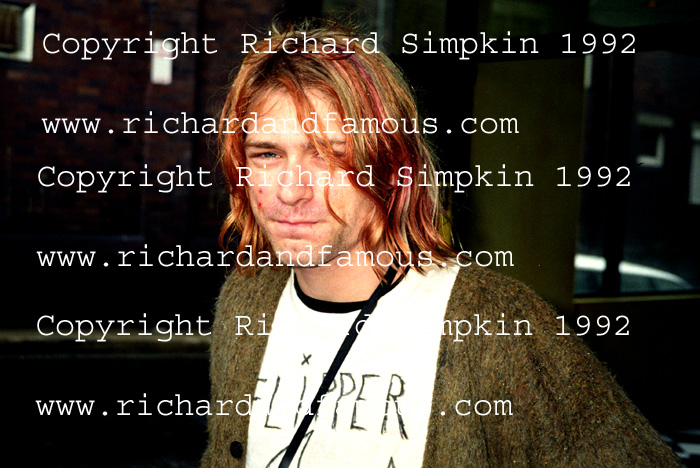 I use a website called Live Nirvana for a lot of my research on the band. It has comprehensive information on Nirvana tour history, music catalogs and also an excellent Nirvana photo archive. Here is the link: http://www.livenirvana.com/

From the Live Nirvana photo archive, I was able to see some pictures taken by a photographer Youri Lenquette of Nirvana on Feb 7, 1992 that was commissioned by Best. The band’s clothing in the pictures matches the 2 pictures taken by Richard Simpkin. The tour dates checks out. The pictures checks out. Still the bottom line question is whether the autograph on the signed Nirvana Australian Hormoaning EP CD is authentic?? I did contact 2 people who had in person encounter with Nirvana back in 1992. The autograph on this Australian Hormoaning EP CD is comparable to examples that were obtained around the same time in 1992. I contacted Richard Simpkin to see whether the signed CD was still available for sale. He still have it and we were able to come to terms on the selling price which includes the signed CD, a copy of his Richard & Famous book, provenance letter and 2 Prints of the pictures of Nirvana that he shot.

I have compiled examples of Nirvana autographs from collectors and the internet.

A Nirvana Signed CD EP "Smells Like Teen Spirit" that belongs to Richard Simpkins was sold at RR Auction which ended on July 23, 2015 for $6366.00 (Including the Buyer's Premium). 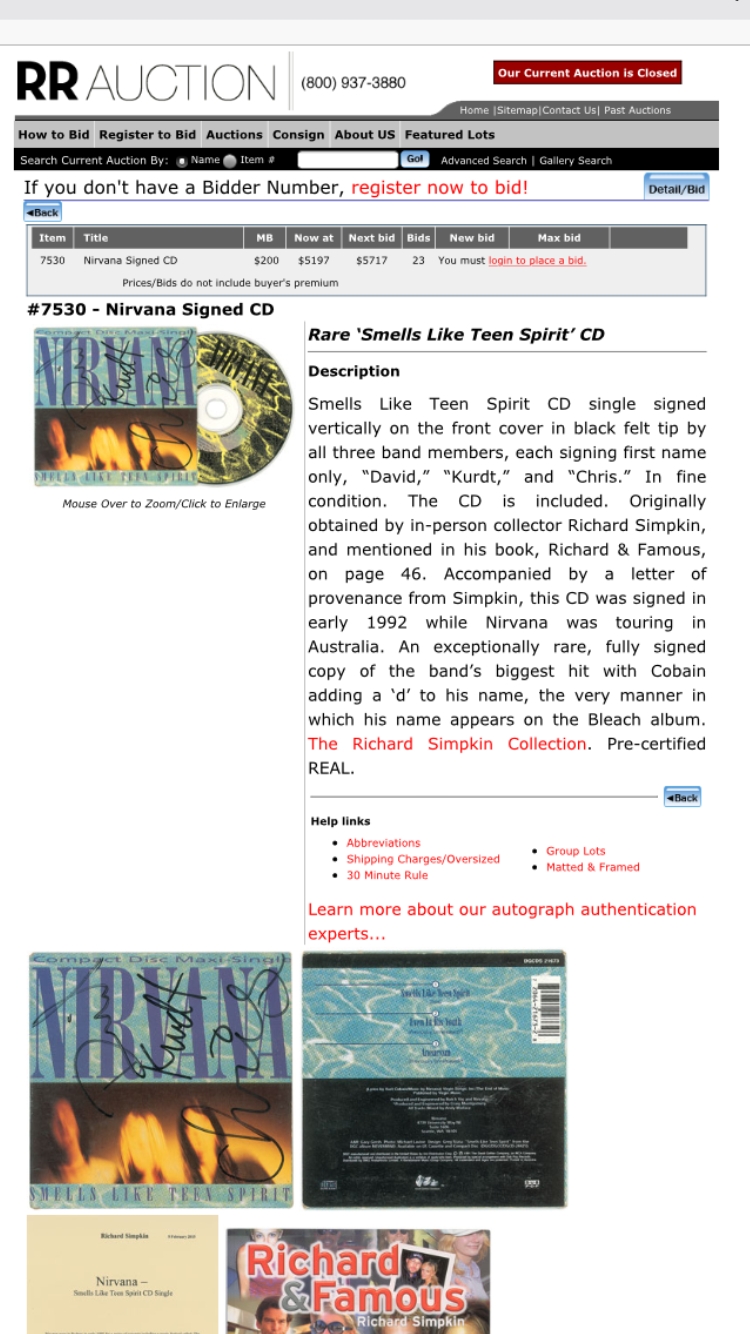 Great images and article. I looked at your photobucket images. How cool would it be to have the signed In Utero poster with the huge signature?

Comment by Paul on July 24, 2015 at 11:13am
I'd like to see who writes out a coa for the slts cd, since Mr Epperson doesn't touch nirvana perhaps psa dna if they send it off.

Comment by Paul on July 24, 2015 at 12:03pm
J. You could put your gap signed jeans in the auction because it has a coa if the door is open for nirvana items from rr auctions. I wouldn't put anything signed by Dave when he signs chad in the auction. I always read rr don't have nirvana items looks like the tide has changed perhaps because there money to be made.