Autographs in Movies and TV -- the Mistaken Identity Edition

I occasionally do blogs where I tell autograph stories that I see in movies or on TV shows, so...here are the latest. In the new Woody Allen movie -- Cafe Society -- it takes place in the ‘30s. There’s lots of talk about the old movie stars of the day. In one scene, Steve Carell, who plays a high-powered agent, is given a gift by his secretary, played by Kristen Stewart. It’s a handwritten love-letter from Rudolph Valentino, a sex-symbol from the silent film days who died young (31-years-old). Her character talks about how she bought it at a memorabilia shop, which made me wonder...were there such shops in those days? It seems collecting memorabilia of that nature probably wasn’t nearly popular enough that a shop would be devoted to that.

Anyway, any autograph collector that watches that scene, would love the idea of a gift like that. Perhaps Woody Allen, who is always a bit grumpy but a willing autograph signer, can appreciate the idea of being a fan of autographs.

On TV this morning, I had it on Kelly Live (I think that’s the name of the show that started with Regis and Kathy Lee). The second guest was Rami Malek of the show Mr. Robot. My girlfriend was thrilled, as she’s a huge fan of the show. When we went to the Critics’ Choice awards last year, I was glad she got to meet him and get a photo. I was talking to his co-star, Christian Slater (although neither of us asked for autographs, as we didn’t want to be pests at an award show).

Malek, always very personable, told a story about a young girl that asked for his autograph at a Dodgers game. She thought he was Bruno Mars, and he told her he wasn’t Bruno Mars. She started crying, and he felt bad. A few minutes later he looked for her, found her, and signed the name “Bruno Mars.” As the crowd laughed he said something along the lines of: If she’s watching this now, she’s going to know I wasn’t him. 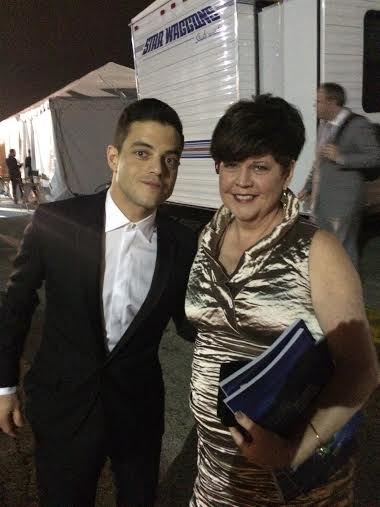 It’s always funny when you hear stars talk about being mistaken for other stars. Bonnie Hunt talked about bringing her mom to the set of Rain Man, and her mom having a great conversation with Dustin Hoffman, only to end it by referring to him as Al Pacino.

Jeff Daniels talked about being on a roadtrip in his RV, and being asked for an autograph at a gas station. The guy thought he was Jeff Bridges, so he signed the autograph “Jeff Bridges.” He looked at the camera and apologized to Bridges, admitting he does that a lot when somebody mistakes him for Bridges. As an autograph collector, I’d love to have a signature like that. The closest I got to that is when I asked one of the most underrated musicians around -- Todd Rundgren -- for his autograph. It was on an 8x10 photo my friend took of him onstage with Ringo Starr. He loved the picture, and mentioned that he had never seen it before. I explained that it’s not a photo that was out anywhere, and as I was about to ask him if he’d like a copy of it -- he started writing “Ringo” on it! He immediately stopped himself, apologized, and tried turning the “Rin” into “Run”. It’s a bit of a mess, but I still love the photo and story behind it.

Comment by Adam Halloran on July 15, 2016 at 4:55pm
If I remember that Jeff Daniels RV story he was actually at a truck stop in my hometown of Erie, PA. Thought it was a funny story when I heard him tell it.