I sometimes imagine I’ll be driving by and see an estate sale, with a sign that says “autographed items” and I stop and get a great deal on something. What keeps that dream alive is hearing stories like this. A woman in Maryland bought a used piano at an estate sale from a woman that died in 1969 -- the year of my birth. When that woman died in 1992, that piano sold at an estate sale for $25 to someone else in the family. Ellen Kelly made the purchase, and probably thought it was money poorly spent, when one of the pedals kept sticking. A friend came over to fix it and noticed a Babe Ruth rookie card, along with 100 other baseball cards inside. Even though she found these a while ago, she’s now selling them.

Kelly said her father or uncle probably hid the cards inside the piano because their mom threw everything out. And, the amount of times we’ve heard from the older folks in our family, “If my parents didn’t throw out my comic books” or “That Mickey Mantle rookie card I had…”

No word on what the other cards are worth, but a Babe Ruth rookie card (in better condition), sold for almost $39,000 a decade ago through Heritage Auctions. 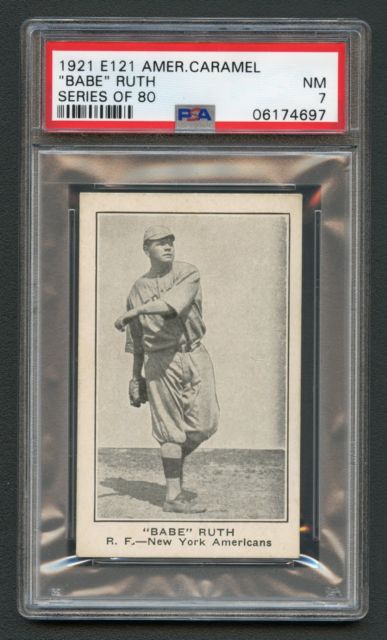 I am always amazed by the prices such things sell for. After all it is just a printed piece of paper that can easily re-printed to match the original one to 100%. I mean there is nothing personal like a autograph or fingerprint on it what makes it special besides of the fact that it is rare? How many of these cards exist? 1,5 or 10 don't know. To be fair I don't get it with stamps, 1st issue books or even with 1st vinyl pressings either but to each their own.

It's funny you say that, Patrick, because...I do get it! With all of those things you mentioned. It's the "idea" that you have something rare. Now, what I don't get. I have a friend that has a lot of money. She is a big wine collector (I was going to say "connessuor" but I'm not sure how to spell that). She's given me glasses of wine that were from a $500 bottle. They taste no different to me than the 2-buck chuck (Charles Shaw). Even big wine tasters, sometimes get fooled during competitions. The one they pick as their favorite, is a $10 bottle of booze. Yet they spend all these insane prices for a certain vintage, grape, vineyard, etc. And they literally, don't taste better!! But with collecting things, and something being rare -- I get that. For example, you mentioned somebody could recreate that Babe Ruth rookie card. 100% just like it (same paper/cardboard stock, everything). Well, somebody could forge a signature on an album by The Beatles, too. Now, I have a friend that has 25 valuable, old cars he collects. He was Jay Leno's mechanic for awhile, too. I told him someday I'm going to buy a kit car of an old Corvette. That way, it looks like a 1960 Corvette, but not the expensive price of one, and a new engine that won't need to be worked on so much. Well, this guy doesn't even want an old car that's original, to have new parts on it, or a new CD player instead of the original car radio. It all makes sense. I mean...if you really want to break it down, a majority of society would think we're crazy for wanting a famous person to scribble their name on a piece of paper for us.