It’s a 1963 Martin D-28 acoustic that Bob Dylan played at many concerts in the ‘70s, including his “Rolling Thunder Revue” tour in the mid-70s.

When Heritage Auctions auctions it next month, they’re expecting $300,000 for the ax. The person making good money on it is Larry Cragg, who was Dylan’s guitar repairman who bought it in 1977 from him for $500. He has the receipt to prove it, too. And that’s a good thing. A friend of mine owns “Rock Star Guitars” and he was sued by the Hendrix estate a few times for guitars of his he sold, that they claimed were stolen (he won each lawsuit, but I digress). 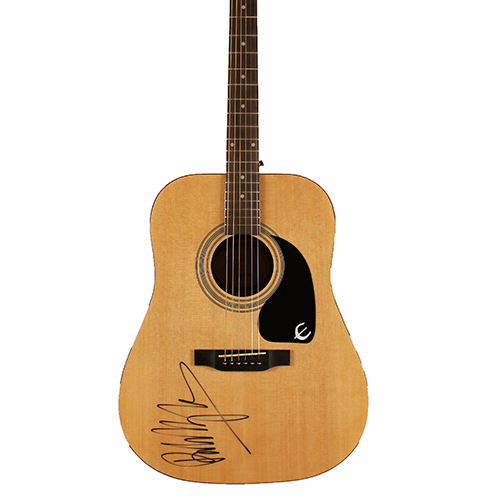 Cragg says it has all the same parts on it, and even the same guitar case. Now, he was a guitar tech for Bruce Springsteen, Santana, Prince, and Neil Young. So I’m wondering if he has some other instruments he’s going to eventually auction off.

The Dylan guitar Christie’s auctioned about five years ago, went for a million dollars. But that’s the Fender Strat he used at the Newport Folk Festival in 1965 when he “went electric” and ticked off the crowd by doing so. That was sold by the family that got it after Dylan left it on a private plane (which made me wonder why he didn’t sue in that case).

The biggest event this acoustic guitar has going for it, is that it was used at George Harrison’s “Concert for Bangladesh” in New York City in 1971 (I still have the albums from that show). Who knew back then that eventually Dylan and Harrison would someday be in a supergroup together -- The Traveling Wilbury’s. Speaking of which, the recently departed Wilbury Tom  Petty has an autographed guitar that’s going to be sold soon, and it’s getting a lot of attention in my hometown of San Diego. At a festival called KAABOO, Tom Petty and the Heartbreakers played there 15 days before he died. Someone had him, and the rest of the band, sign a Fender Stratocaster. It was part of a campaign to get items to auction off to help save the Starlight Bowl in Balboa Park (where Crosby, Stills, and Nash did their first concert in the ‘60s). The only concert Petty did after KAABOO, was at the Hollywood Bowl, and there’s speculation that this might be the last signed guitar the entire band put their names on.

Guernsey’s is going to auction the guitar in the beginning of December. They also have a few Hendrix guitars, as well as a bass that Springsteen played on a few early albums.

With the fact that the money goes to charity, and it may be the last signature of Tom Petty on a guitar...it could go for a pretty penny.

What I want to know is...if anybody has a signed guitar by the Traveling Wilbury’s, and if they do, did they sign it with their Wilbury character names or real names [for those that don’t know, the band consisted of Roy Orbison, Bob Dylan, Tom Petty, George Harrison, and Jeff Lynne of ELO].

Comment by Adam Halloran on October 27, 2017 at 3:54am
I always got a kick out of the episode on History Detectives ob the discovery of Bob Dylan's Electric Guitar from the Newport Folk Festival. I believe Jim Irsay (owner of the Colts) purchased it, he is a major guitar collector.

he did sue i the electric guitar case .

there is no complete wiburys signed guitar

also they made wilburys promotional guitars in 3 differnt sizes