Remember when Ringo Starr made that statement that he wasn’t going to sign autographs anymore? It was hysterical, because he hadn’t signed autographs (in person) for decades before that statement. What people didn’t know was, that he was great about signing through the mail (I sent him a CD a month before he decided to stop signing).

Well, actor Bryan Cranston yesterday made a similar statement. Luckily for my friend Peg, she got his autograph when we were backstage at the Jimmy Kimmel Show. It was around the second season of Breaking Bad. We were backstage with Heidi Klum, Dwayne “The Rock” Johnson, and the late Soundgarden singer Chris Cornell. She was most excited by meeting him, and he was thrilled that she was thrilled (especially with such star power backstage, and him being the least popular of that bunch). She doesn’t care about autographs, but I made her get his signature (I didn’t care, as I wasn’t a fan of the show; I regret it now, especially after seeing one of the best movies of last year -- Last Flag Flying. But I digress).

Cranston confused people are first, when he tweeted out yesterday “I’m retiring.” Since we had just heard of Daniel Day-Lewis retiring, claiming “Phantom Thread” was going to be his last movie (side note: it’s an awful film, don’t see it). Cranston tweeted, "Friends, After 18 years of signing everything for fans - I’m retiring. Overwhelmed by requests and I just can’t do it anymore," he wrote on Twitter and Facebook. "I love meeting fans and will personalize pix in person, but that’s all. Thanks for your understanding. See you on the street - we’ll take a selfie! Bryan"

What confuses me about the tweet is this. What does it mean to say “will personalize pix in person”? Does that mean he will autograph and personalize photos, but they have to be in person, and not through the mail? And if somebody does have a picture of him in person, that usually means it’s an autograph dealer. No other people are just walking around with 8x10 photos of him. 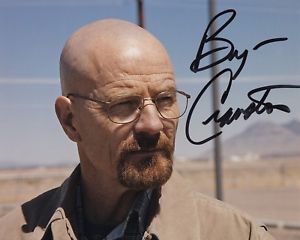 I heard Cranston on a talk show last year tell a funny story. When he was doing autograph signings to promote his book, people would sometimes say they’re getting a book signed for somebody else. They’d then say, “My sister will love this book. She’s such a huge fan of yours.” He’d smile and say, “Well, why are you not a big fan?” They’d then get embarrassed and say, “No, no...I am, too. But she’s a huge fan.”

Well, he had one time where the guy asked to get a book signed, saying his wife was a big fan. He said, “And you’re not a big fan?” The guy responded, “No, not really.”

To which Cranston had no response.

Cranston has always been great with fans asking for autographs and photos, and even going above and beyond. One time a 19-year-old with terminal cancer wanted to Skype with him, which he did. He then sent the guy Breaking Bad stuff, and even an ice cream truck to stop by his house.

Another time, he recorded a video for a high school student that wanted to ask a girl to the prom.

Here in San Diego at Comic Con once, he wore a Walter White mask, only taking it off when he reached the Breaking Bad panel. All the fans there that had seen him walking around, were kicking themselves for not approaching him.

I got to see Bryan at a promotional appearance for his book. Small room of about 100 people. He answered questions and stuff. It was a bit awkward because of some of the stupid questions people were asking. We got a signed book out of the deal but didn't get to meet him, and I think they kind of made it a point to sneak him quickly out the back, because he was just gone.

It seems like he was a prolific signer, so even though he is retiring from it, I bet it won't matter much in terms of availability, at least not for quite sometime.

Stupid questions are the worst. It ruins it for everyone.

The San Diego International Film Festival gets the best guests. One time, after a screening, Oscar winner Adrian Brody was asking questions. It was this powerful movie, that dealt with the Holocaust. In one scene, he was being tortured and was nude in a cell. During the Q&A, somebody asked, "Did you use a stunt butt, or was that your real butt?"

He had at least a 20 year career prior to BB (first show I saw him in was a 1987 Matlock) and of course, a long run with Malcolm yet so many people only know him for Breaking Bad. It's awesome for him to have such a successful run with BB yet I'm sure he wants fans to know him for his many performances prior to the 2008 show.

I doubt this will be like a Ringo Starr who's probably done-done. I'm thinking Bryan will either just cool it a little, try to dissuade the dealers but also make sure the true fans will get at least a small opportunity an autograph or a photo. His compassion and humanity come off in many of the shows I've seen him in so I think he's a pretty genuine guy. Even during the Malcolm show he was replying to fan mail with signed 8x10s at a time when most tv show main stars were pre-prints or no reply.

He probably knows how powerful social media is and is probably banking on his news making the rounds and making some think twice about coming out for autographs.