Calling all John F Kennedy Experts - what do you think of this?

OK, I can’t believe I am already doing this all over again, but now instead of John Wayne it is John Kennedy.

I am hoping for some of the great objective expertise from the John Wayne study I posted a couple weeks ago.  Anyway, here is the JFK case study.  Refer to the letter and close up signature below. In 1965 Charles Hamilton wrote the most extensive case study ever produced for John Kennedy’s genuine, autopen and secretarial signatures, “The Robot that Helped to Make a President”.
Now using Hamilton’s analysis and the letters below I have conclude this is a genuine JFK signed letter for the following reasons.

1). Hamilton concluded JFK did not start to depend on secretarials until after 1953.
2). The first known documented secretarial was 1952 (secretary IV page 31 of Hamilton's book). This letter is 1951
3). None of the secretarials on pages 22-31 are a match for this letter signature
4). Robot was first seen in 1958
5). The signature is a match as Authentic  . see pages 45-46
6). Kennedy’s secretaries may appear skilled but they all made glaring mistakes somewhere within their “work”.
- Note the secretarial “J”’s are over flamboyant with High hoods and crossovers compared to his genuine during this time period (1951)
- The “ohn” is way out of whack in height and width compared to his genuine where “ohn” is always lower then the “J”.
-  The “K” often throughout his later life was a circular loop like here, see pages 41, 50,
- The break after the last “n” is quite consistent during the early 50’s. The secretaries really screwed that up consistently , see page 31.
- During the early 50’s his genuine examples still displayed a recognizable “e" after the last n.  Then the “d” would look like the first part of the “y” which it actually wasn’t.  The “y” would just drop off very low after the “d”.  See page 46.

There are several other variables, but didn't want to ramble on forever.

What do you guys think?

Comment by john reznikoff on January 10, 2011 at 5:55pm
I have to check my exemplars but seem to recall a similar secretarial. A useful exercise might be to post the relevant pages from hamiltons book for all to see, both secretarial and genuine from the period.

Comment by kevin conway on January 10, 2011 at 6:42pm
Also, note the second "secretarial" page image is primarily late 1950's.   Interesting how you can begin to see secretaries trying to duplicate his authentic examples from the early 50's.

Here are copies of the actual pages form Hamilton's book.   The first two images are the secretarial pages examples from the early to late 1950's.  The last three images are genuine examples (pages 45-46 of Hamilton) from early 1950's. I also posted the letter signature a few times to make it easier to compare and analyze.

Note Hamilton's intro paragraph on last image of how JFK's sig would lose it's consistency the closer his got to the Presidency. 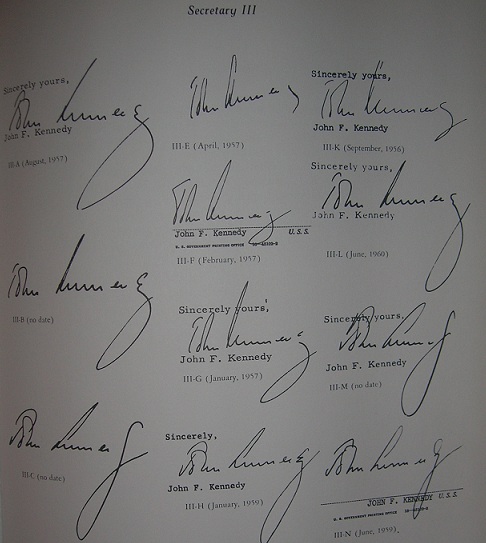 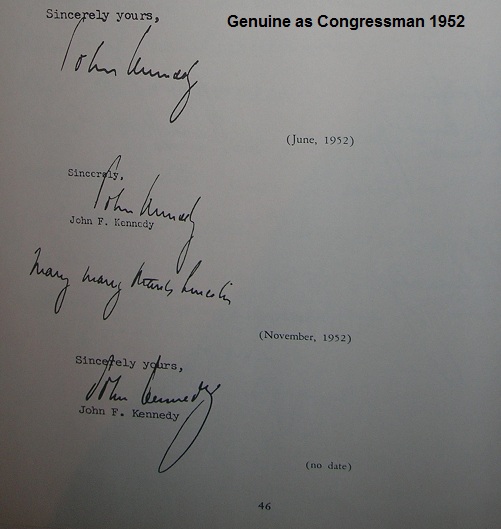 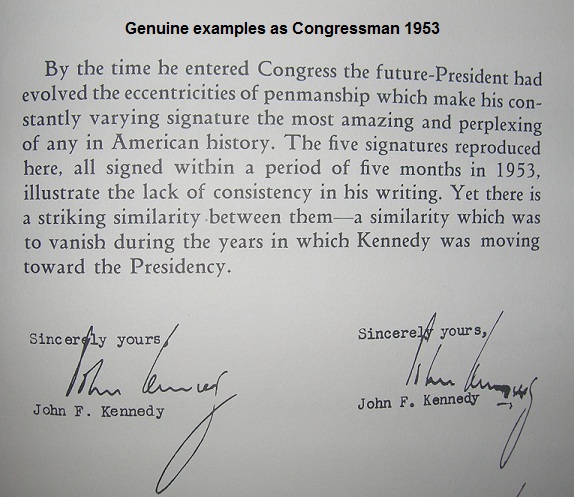 Sorry Steve for using up so much space!

Comment by kevin conway on January 10, 2011 at 7:55pm
The only irregularity I see with the letter signature is the tail loop on the  "y"  doesn't come down as far as the rest of the examples. But, the rest of  the last name seems to be a very high scoring match.  The "John" appears dead on.

its not that I am lazy, I just have trouble with the scanner and my staff is tapped right now. It is more likely good than bad but if I were asked to opine for an auction or 3rd party i would decline opinion to be safe. The body of the signature most closely looks like the Nov. 1952 and (no date) below it. The No date is doubted by some even though it is in Hamiltons book as good. I personally think that it is in the middle of good and bad. Also look on page 41 of the Robot book, bottom left "As Congressman (1952) " another close match. What throws everything off is the "y" which is way too varient. Bottom line is that you probably have a genuine letter that no one will certify.

Wow John , an unsettling dilemma. Particularly when I’ve tracked maybe a 100  PSA/JSA  JFK’s over past ten years or so that were far more obscure, even unrecognizable then this, which has about 90% match to Hamilton’s genuine examples from that time period.   The only thing I see variant here is he missed or skipped the bottom of the “y”.    Thanks for taking a look.

I'm really enjoying this discussion. I don't know much about Kennedy's signature, but I was surprised how clear it was until I saw it was 1951. This is a signature that requires further research, including provenance and comparison to signatures from similar periods, to reliably authenticate.

I have images of the letters he wrote to to his Swedish mistress, Gunilla von Post, from 1954-55 that I can upload. I think they make a case against the signature being authentic, but by no means a clear one.

Don't think you can rely or compare the two. Because when you get into JFK's signature using reference works like Hamilton, you'll realize using examples from 1954-55  for a 1951 letter would not be reliable, and actually expected to be be dramatically different.  As Hamilton states "Kennedy's constantly varying signature was the most amazing andperplexing in American History".  You really had to get examples within months of his signing to see even the "variants" match up.

Comment by john reznikoff on January 11, 2011 at 11:02am
Look at the way the "y" looks like a "z" in the questioned example. As I said it is probably good. If I had a few hours, no kids and no pets and no blizzards...I could probably opine one way or another. Right now it is a 5 on a 1-10 scale. Dig up those examples within a months or even a week that have passed and if they are a match you will have a convert! Kevin, I am sorry you are doing my work again but hope you understand that I do what I can when I can. This is a great blog! Good work.