College Athletes -- They Can Be Paid for Autograph Signings 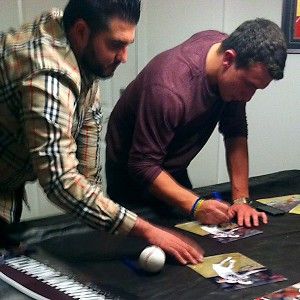 More than five years ago, I wrote a story here about quarterback Johnny Manziel (remember him?) being paid to do an autograph signing. We know athletes do them, but he was a collegiate athlete at the time and the NCAA got involved, and it got ugly. Well, today it was announced that college athletes can earn money from the use of their name or likeness, although the NCAA is being vague about what is and isn’t allowed.

The NCAA is continuing to lobby Congress to override state laws that allow student athletes to be paid.

Last year in California the ball got rolling for all this. Colorado since approved a law, and many states are debating it. Others are in the process of approving it.

Of course there are going to be many restrictions with all this. One of those is that a school booster can’t be involved (although I’m wondering how that will be enforced). I’m more curious as to how things will work when say...a school and their basketball coach has a deal with Adidas. As it is now, all the players got free Adidas and had to wear them for games. Let’s say the new hotshot player on the team is approached by Nike. To make money off their name or image, they need to wear Nikes or do some ad campaigns. How would that go over for the suits at Adidas? I still think Zion Williamson should have done something like that when his shoe fell apart during a game at Duke, and caused his injury. Surely he could have parlayed that into a $100 million deal with a competing shoe company. But I digress.

Student athletes would not be able to use the school logos or trademarks in the various financial pursuits, but if a player is good enough...that probably isn’t important. Zion would have made millions without the Duke logo anywhere in sight.

I’m guessing the most common way a majority of athletes will make money is by autograph signings. Sure, the top athletes will make the most from shoe deals, but...if you have sports that aren’t as popular -- let’s say a volleyball team. Endorsement deals won’t be open to them, but if a player or two is going to be on the Olympic team and can do an autograph signing where they charge $5 a pop, they’d surely get that. Sports camps for kids would probably be a decent source of income, too (if it’s not during the season).

I’m curious as to how this will affect which colleges an athlete decides to go to. Obviously, a recruiter from UCLA has a bigger selling point, as the athlete would be in Los Angeles, versus the recruiter for Ohio State.

The internet would play a big part, as a popular student athlete could be an influencer.

TV and radio commercials locally, would be a good way to cash in.

When I did morning radio, SDSU running back Marshall Faulk had a line of shirts that said “Faulk U.” I was lucky enough to get one, before the NCAA shut that down (and I’ve been close a few times to meeting him, and having him sign it). Future clothing lines for athletes would be an easy buck.

When it comes to alcohol, that could be a problem, if they’re under 21. And tobacco products, just wouldn’t be a good look for the university. An NBA player I was a fan of as a kid, Len Elmore, was on PBS tonight discussing it. He went to law school at Harvard, and knows his stuff. He seemed about as confused about all this as everyone else. So, who knows what’s going to happen in the start of the 2021-22 school year (assuming Covid-19 doesn’t keep everyone from going to back to school).

I was going to PM you, but you have to accept a friend request first.

I just wanted to share this with you as it might be an interesting topic for a future blog of yours.

I just accepted. I'll check out the link right now.