The new Spider-Man movie -- Spider-Man Far From Home -- was rather disappointing. I’ll be doing a review of it soon, but...the fact that I loved Spider-Man Homecoming and Spider-Man: Into the Spider-Verse, made this new film that much more disappointing (despite it having a few humorous moments). 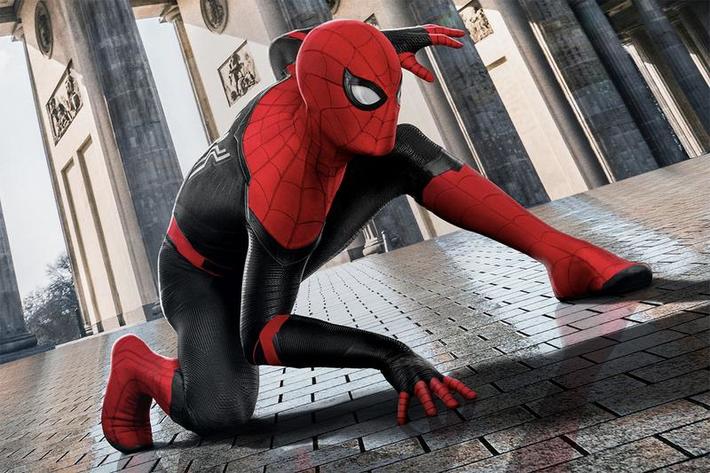 For autograph fans, there is a scene where Peter Parker is shown in his bedroom, and he has a Hall of Fame pennant, that has Mike Piazza’s autograph on it.

In real life, actor Tom Holland acted like a super hero, saving a little girl who was being crushed by autograph collectors (more likely, autograph “dealers”).

It was in New York City, where he was promoting the new film. The video (which went viral), shows the 23-year-old actor approaching the group of people, as the young girl started having a panic attack. Holland started yelling at the aggressive folks who were pushing their wayt o the front to snag their autograph. The girl was being pushed into the barricade. Holland snapped, “I’m gonna throw all your sh** on the floor if you keep pushing that girl!”

The group kept pushing forward, so Holland apparently took some of their memorabilia that tossed it to the ground.

The girl told the crowd she was going to have a panic attack and Holland said to her, “It’s okay, I’ve got you, I’ve got you.” He then pleaded again with the crowd to back up. 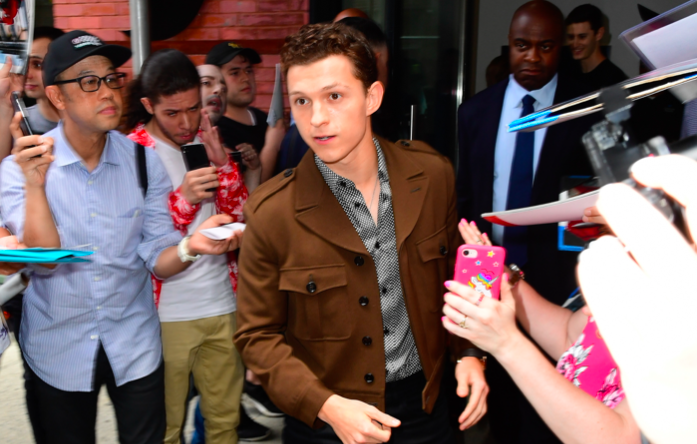 I’ve always been surprised at how the autograph guys that are the ones selling their stuff, are usually the pushiest. Especially since, they’ve been to these types of things enough. They have to realize that the best thing you can do is be nice, and let the celebrities feel like it’s a good vibe. And they certainly don’t want to look over and see a 50-year-old dude with 20 different 8x10 headshots, that they know are going on eBay. Let the real fans get their one or two items signed first, and hang in the back.

A new trend I’ve noticed lately, also has these dopes putting their posters on cardboard, so they don’t get all bent up. That makes sense except, now you’ve got this huge piece of cardboard that you’re hitting people in the head with, or blocking their view and photographic opportunities.

Also, if you show up later than someone that’s been camped out for hours, don’t push your way to the front. That’s the equivalent of cutting in line.

Disgusting.  You can see the video in Rich’s discussion.

Money does strange things to some people. I live in rural Tennessee so I never have the opportunity to get within 100 miles of these stars. It's a shame the a few bad apples spoil the show for everybody.

I tend to try to get autographs at shows I go to, and my (admittedly limited) assessment is that the worst behaved fans when it comes to this are actually older gen x'ers - not the gen z/millenial crowd. I was a bit surpised to see how some people in their 40s and 50s were behaving around Dido a couple weekends ago. Granted, the scene wasn't especially bad (and nowhere near the Holland example), but the distinction in behavior was noticeable. I'm not sure if that generation grew up with rudeness and pushiness at concerts more and that just became the name of the game in their mind or whatever.

That aside, most of these graphers are professional beggars. Some of their activity is borderline criminal. Courtesy typically isn't even in the equation.

From my experience, it is mostly the older graphers that are the worst. I'm talking 50+ years old. They simply don't care and are sleazy as hell. They have their big stupid binders and use those to push into you.

On the other side of the coin, you have these people that have no clue what they are getting into when going for an autograph. What I saw in the video wasn't that bad when it comes to graphing.

I use cardboard for my 11x14s. After a couple issues when it was windy, cardboard and blue painters tape is a must. Everyone is holding out their golf flags on cardboard, so my photo on cardboard blends right in.

I totally get WHY people use the cardboard, but two things happen with that. First, it's a LARGER item that is now making it harder for everyone. Two, it shows the athlete/celeb, that this is a person that knows what they're doing. That's not always a good thing. For example, I met this guy once and we were the only two waiting for an autograph. We shared stories, and it was a blast. But once the tour bus showed up and sound people were walking around, roadies, etc...I told him to chill on telling more autograph stories. He asked why and I said, "We don't need those guys hearing that we do this. Best thing is...for EVERYONE associated with the band, or security for this venue, to think that we're such big fans of this band, that we want our CDs signed. Not that we do this for every Tom, Dick, and Harry that comes into town.

Oh, and here's my review for the new Spider-Man, if there are any fanboys out there that are interested (and best part -- it's spoiler free!)

Well, I graph golfers, so most people are getting pin flags signed, which are a little bit bigger than 11x14. So everyone has larger items. If I have cardboard it absolutely makes it look like I know what I'm doing. However, if I pull out a photo then the person has the same impression, so why not use the cardboard anyway? The look I get is even worse if I ask them to switch markers.

This is what a typical golf autograph mob looks like for reference. 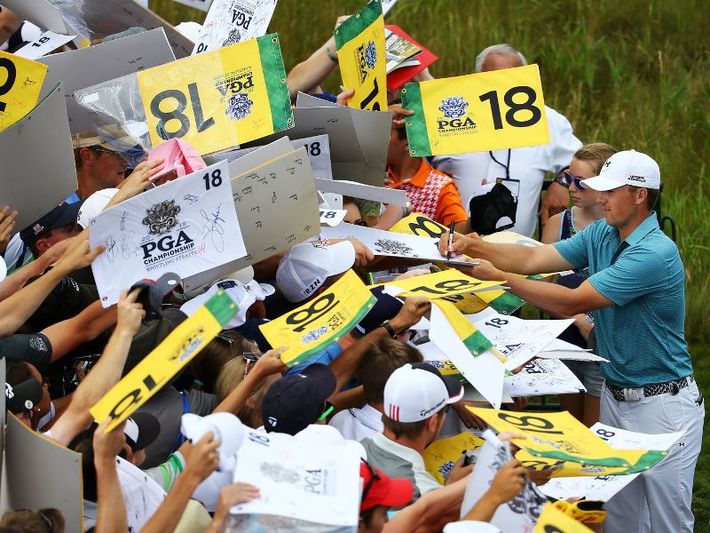 Yeah, you can't ask to switch markers. Just can't do it. Although...I didn't do it once at a Lou Reed signing at Tower Records in L.A., and so...I got black Sharpie, on a few black background CDs. My buddy, right behind him, had a frigin GUITAR!!!! Asked him to switch pens, and he did.