I Got Dylan's Autograph !!!

The title of this blog might be a little of a bait-and-switch. Yes, I did get Bob Dylan’s autograph, but that was years ago, and that was purchasing a signed album from an auction. It was “Blood on the Tracks” -- easily his best album (that’s not even open for debate). It’s the other Dylan, his son Jakob, who I got in person recently. He did a great documentary that’s out now called “Echo in the Canyon” (you can read my review on it here: https://fox5sandiego.com/2019/06/04/echo-in-the-canyon/ 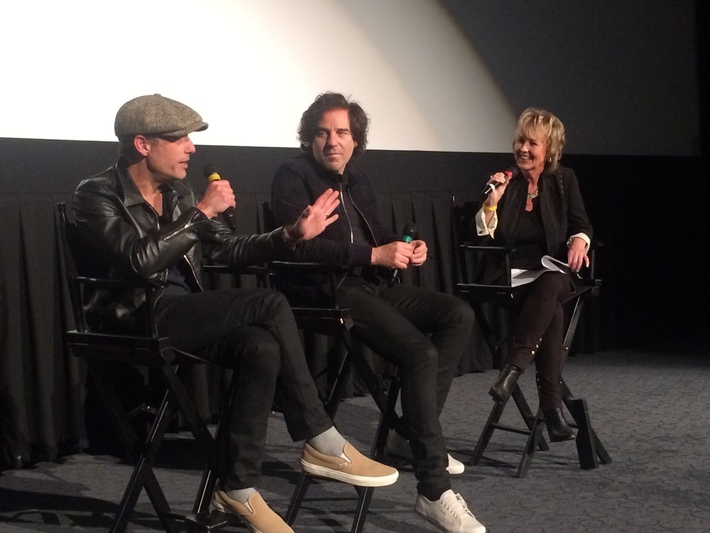 Jakob Dylan came to San Diego with the film director (and his former music producer) Andrew Slater. I thought it would be a perfect autograph to get, and I didn’t mind seeing this terrific documentary again. That, and the fact that he was going to perform a concert afterwards, with vocalist Jade Castrinos of “Edward Sharpe and the Magnetic Zeros.”

If I want to get a signature, I’ll often show up a bit early so I can check out the venue. Yet as a movie critic, I knew this theatre well. I figured Dylan might just walk in the front doors. But as we parked and were walking out of the lot, my wife nudged me. I said, “What?” She then made a motion with her head, at the person walking towards us. I again asked “What?”

She leaned in and whispered, “I think that’s Jakob Dylan!”

As we walked passed him, I said, “How are you so sure? He’s wearing sunglasses and a hat.”

Her reply: I’m a woman. He’s Jakob Dylan. (that was followed by maniacal laughter).

So we turned back around to walk towards the parking lot. Dylan sat down on a bench and I said, “Excuse me, are you Jakob?”

He nodded, and I introduced myself.

I told him I loved his movie and he thanked me, and I asked him to sign my Wallflowers CD. He said “Cool shirt” as I handed him the cover. I had worn my Buffalo Springfield shirt, since they were featured prominently in the film.

I said, “I understand why you didn’t have anything about Arthur Lee & Love, because they’re a bit obscure and you guys had the bigger bands from that era. I just really like them, though.”

His eyes lit up (the sunglasses had been removed) and said, “Yeah, there’s a lot of stuff we couldn’t fit in there, but we do a Love song, ‘No Matter What You Do’ [from their debut album] on the soundtrack.”

I told him they were such an underrated band and he said, “Well...they didn’t want to leave L.A. and they never toured anywhere.”

I responded, “They were huge in Europe and Elektra wanted them to go there, but they were all holed up in a mansion they lived in off the Sunset Strip. They were content to just get high and hang out. I’m thrilled you guys covered a song on the soundtrack, though. I figured when you do a documentary like this you have 500 hours of footage and have to figure out what to put in and take out, and it can be daunting.”

“There was a lot of footage and sometimes we’d get some good stories that were really funy, but it didn’t really fit in with what we were doing, so we left them out,” Dylan said.

I told him it was nice that, even though I saw some of the same people that were featured in “Under the Covers”, they had different stories. He didn’t know what that was, and I told him it was a small documentary on Henry Diltz. Again, his eyes lit up as he said, “We had some interviews with Diltz, too. They didn’t make it in.”

“I did notice you used some of his photographs in the movie, which was cool to see.”

He went on to explain, “At the Q&As I’ve been doing, everyone is asking me why Joni Mitchell wasn’t in there, or The Doors. T here’s just so much that we couldn’t cover.

At the Q&A that night, somebody asked him why they didn’t have the Velvet Underground in it. I cringed at the question. He simply replied, “Well, they were the East Coast, and we were focusing on the West Coast.” 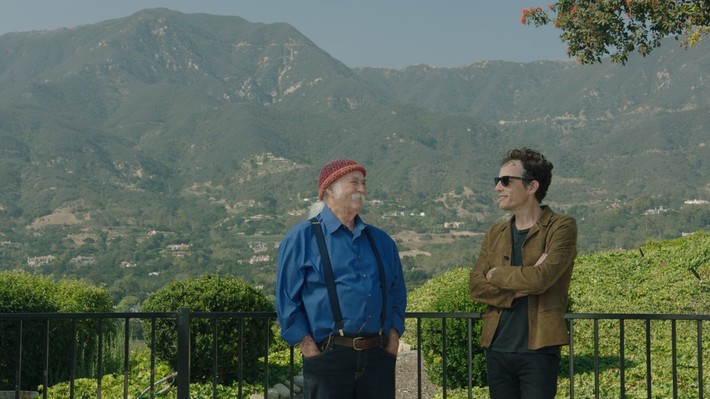 I had also told Dylan how it was amazing that Ringo Starr and David Crosby, who can often be difficult, were in such good moods in his documentary. I told him about the times I’ve tried to talk to Crosby and he was so mean [I was afraid to tell him I wrote about that incident, calling the story “David Crosby Flipped me the Byrd” in Autograph Magazine].

He chuckled and said, “Crosby can be cranky.”

He also asked if I had seen the documentary on him yet, which I hadn’t. I can’t imagine it’s going to be half as good as Echo in the Canyon is.

I thank him for his time (I always think it’s better to bow out when you’re talking to a celebrate, so they don’t have to be put in that awkward situation).

After the movie, the audience was asked if they had any questions. Even though I had talked with Dylan hours earlier, I thought it would be awkward if nobody asked a question, so I raised my hand. I said, “I have two questions. First, Stephen Stills seemed to have problems with his voice, and I wondered if he was okay, or had surgery or something. Also, it was great seeing Tom Petty, and how he smiles grabbing that Rickenbacker. It was nice that Roger McGuinn (The Byrds) often played songs on a guitar after telling stories about them. But why was the decision made to have Ringo Starr stand in front of a silver Firebird while he talked about the music scene?”

The crowd laughed. My wife thought it was rude of me to ask.

Salter told us that Still was having problems with hearing loss and that it made it hard for him to hear his own voice when he’s speaking. He then smiled as he explained, “We thought having Ringo by the car was cool. You see Gary Lockwood driving around in that old MGB in the clips of Model Shop. Jakob didn’t look as cool in the green MG but when we pulled up to the house, we just thought it would lok good. Sometimes you see interviews with musicians from the ‘60s and there will be a plant in a weird position behind them, or just one light. These guys are in their 70s and are cool. We thought we should make them look cool.”

The crowd erupted in applause. 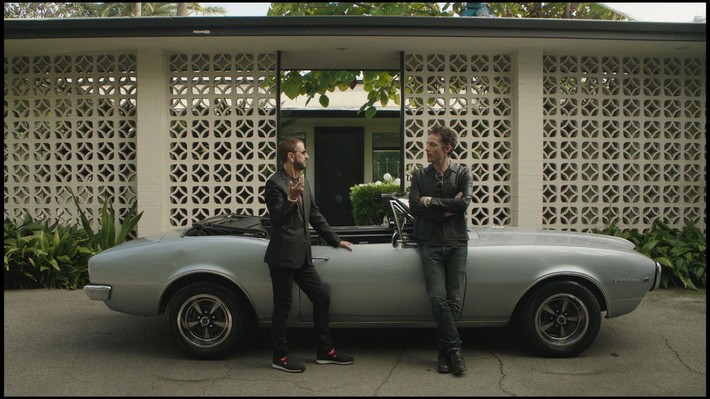 Someone else asked why Neil Young wasn’t interviewed and Dylan said, “It was hard enough to get Young to play on the song, and we liked how the ending worked with him playing that psychedelic solo and the guitar dropping, so we didn’t think it was necessary.”

After a handful of questions, the crowd was ushered out to a patio, where the band had equipment set up outside the ArcLight theatre in La Jolla. I was thrilled to see it was a whole band, and not just an accoustic show.

Jade Castrinos sounded amazing on their version of The Mamas and the Papas beautiful ballad “This is Dedicated to the One I Love.”

They also played “Go Where Ya Wanna Go” and in the documentary, you hear a good story about that song.

Dylan told the crowd “This is the best venue I’ve ever played.”

As the crowd of 100 started clapping, he admitted to saying that at all venues, because it gets applause. We laughed.

Dylan then said, “Now we’re going to do a Love song.”

I screamed in excitement from the crowd and he looked up and said, “Oh, so we have some Love fans.”

He then added, “It would be confusing if I said this was a ‘love song’ so I’ll say it’s a song by the Love. Arthur Lee and Love.”

They played No Matter What You Do, and I asked my wife if they did that because I brought it up earlier. She rolled her eyes and I said, “Hey, when I met Ray Davies [The Kinks] before a show, he was signing my albums and I asked if he’d do Waterloo Sunset. He said it wasn’t on their set list, but he’d think about it. That night, they did the song, and a writer from the LA Times had complained the following day that he didn’t do that song in L.A. the way they did the previous night in San Diego. So...ya never know.

After their show, I approached Jade to have her sign my ticket stub. I said she did Mama Cass justice because she sounded wonderful. She thanked me and as I asked her to sign my ticket, she said “Oh my gosh, this is great! You’re making me feel like such a rock star right now.”

I just wish I would’ve picked up a Magnetic Zeros album.

It was a great night of movie and autographs. And if you have the chance, see Echo in the Canyon. You’ll be glad you did. 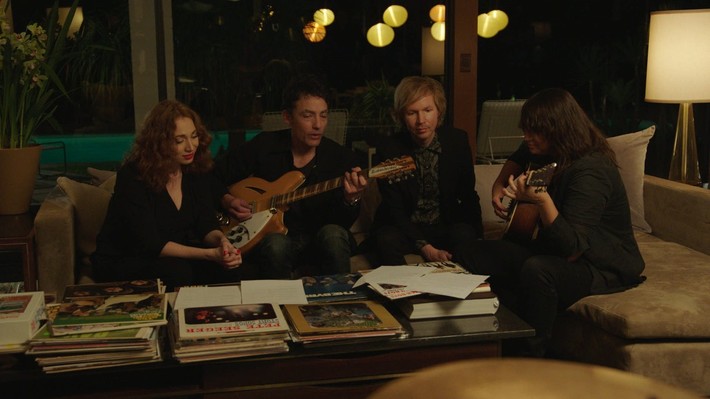 Can we see the autograph?

I wrote to him via venue once and to his agent once with no success. I’d like to have his signature. Their music was very important to me in the late 90s and I still enjoy it.

I'm such an idiot! I meant to post the picture and completely forgot. 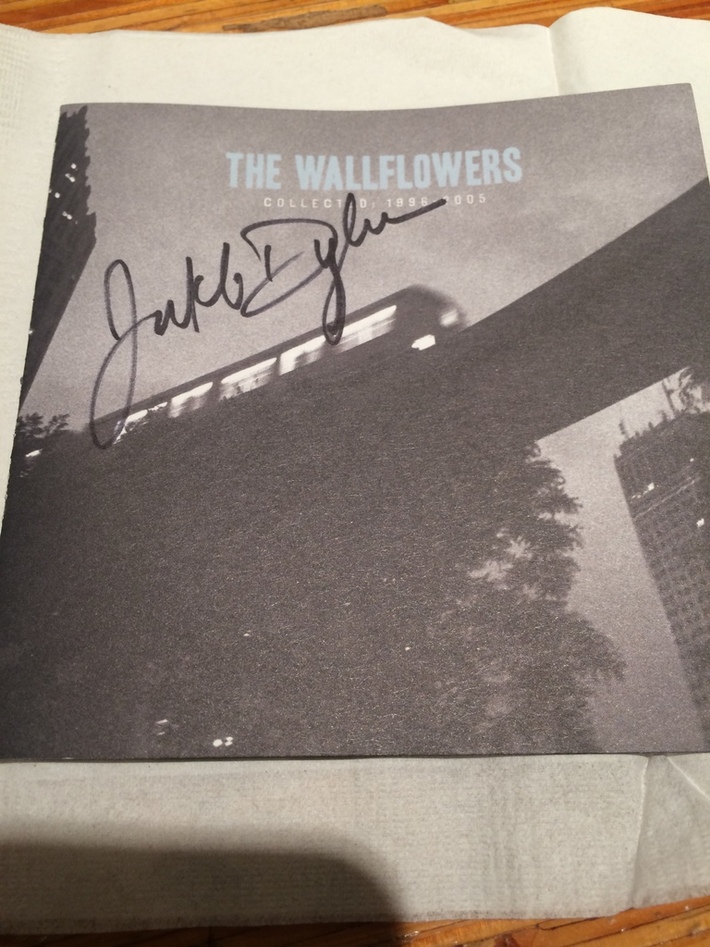 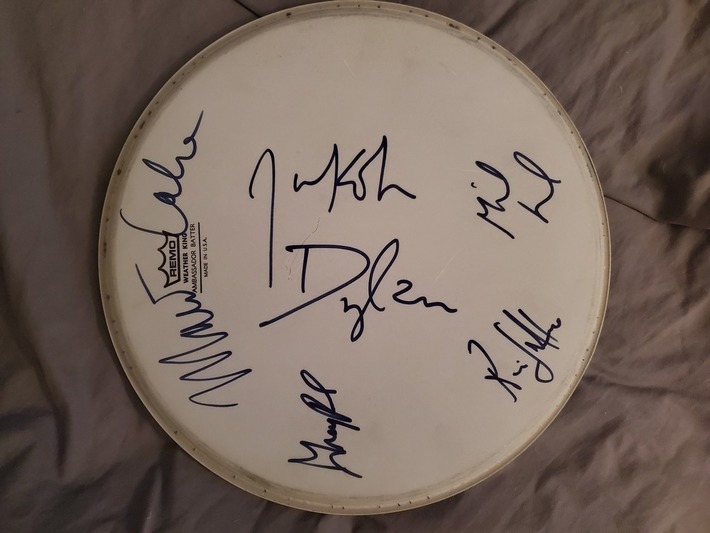