There was a video I saw a few years ago where MMA fighter Conor McGregor showed up at a fans house and signed autographs. It turns out, McGregor was working out for a month at a nearby gym. This guy was Irish, and a huge fan, so he hung signs off his balcony wishing him well, and different messages daily. One day McGregor had a film crew follow him, when he decided to go knock on the guys door. It was great to see how thrilled this guy was, and also great to watch as this guy innundated McGregor with so many things to autograph. I sometimes have a dream that I’m meeting someone famous, and can’t find anything for them to sign, or I go home and can only find one album.

Well, I thought of that story the other day when Keanu Reeves saw a sign someone had on their front lawn. Reeves is in Slidell, Louisiana (which I hear is lovely this time of year). He’s filming “Bill & Ted Face the Music.” A writer on the film (Ed Solomon) noticed the sign that said “You’re breathtaking” as a reference to Reeve’s appearance at a conference in which he said that to the crowd.

He informed Reeves, who went over, jumped out of the car and autographed the sign. He ended up personalizing it for them, and taking photos with the family when they came out.

Since the movie is filming down the street, the family has now added another sign. It said “Thank you, Keanu.”

No word on if he’s stopped yet and signed it with “You’re Welcome.” 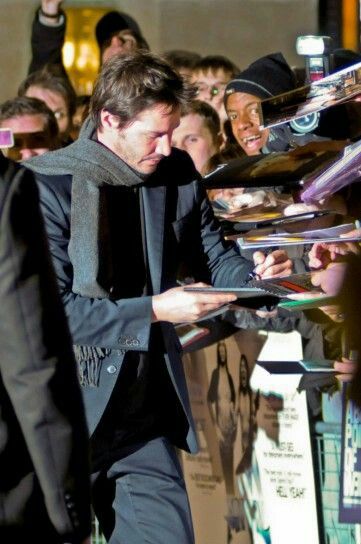 He is known to be a great guy around fans

Very cool. There were stories within the last few years ago fans meeting Liam Neeson and The Rock based on making signs.