With Derek Jeter approaching Hall Of Fame status, you're going to see thousands of forged Derek Jeter items on EBay.

It's unfortunate that the majority of people who own Derek Jeter so-called autographs, actually own forgeries.

It's both sad and disgusting.

I've been exposing Ebay sellers of forgeries for over 15 years and will continue to do so.

People have this misconception that Ebay filters out the forgeries; nothing could be further from the truth; and with Ebay so heavily-populated with delusional autograph collectors, impulse buyers and scammers, Ebay is a haven for sellers of forgeries.

Further more, with Jeter approaching HOF status, even more people are going to desire to own his autographs and the flood gates of forgeries will open even more.

This is, as you can clearly observe, an obvious and laughable forgery.

Stay away from this crap.

Another point I want to make clear, is that those same aforementioned people don't buy the autograph; the purchase the piece of paper called a COA.

Buy the autograph, not the COA.

Look at this crap!!! Worthless COA from Bid.Com International (Who???). 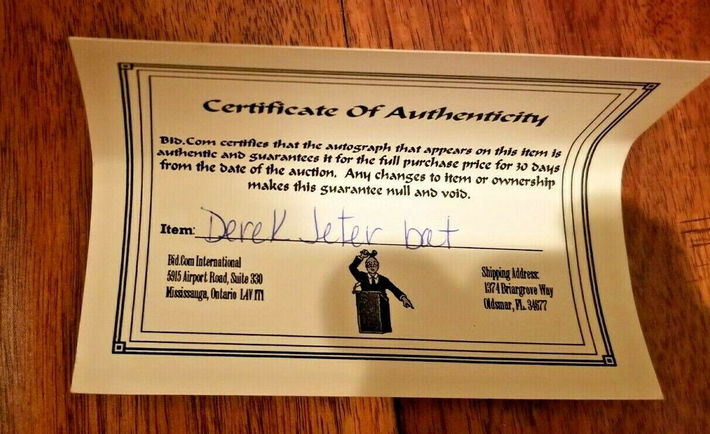