Graphing in Cleveland in May

May turned out to be a very good month for adding some autographs.

First up, Michael Keaton came to town to speak at my alma mater, Kent State.  We got him coming off the plane and he was very nice.  However, he did refuse to sign anything Batman, Spiderman or any action figures.  He passed me over a couple of times, I then pulled out "Birdman" and he passed that over a couple of times.  I was right in front of him and said "Michael, you should have won the Oscar for this role."  He stopped and said, "What's your name?" and personalized my DVD.  He personalized everything and took a couple of selfies with fans before leaving. 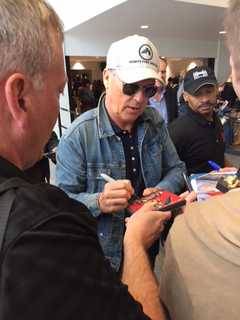 Kenny Loggins came to town to perform with the Contemporary Youth Orchestra.  The CYO has performed with Styx, Melissa Etheridge, Jon Anderson of Yes and Graham Nash to just name a few.  It really is a great show and Kenny let the kids shine in the spotlight.  After the show, Kenny signed and took pictures with anyone that was waiting.  I got him on "Footloose," "Nightwatch" and an album and mini guitar that Jim Messina already signed for me. 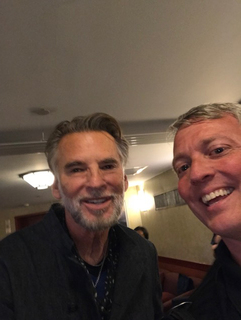 As I've mentioned several times, the Rock Hall has some great programs throughout the year.  This year, they just opened a new exhibit and members got a sneak peak before it opened to the public.  They announced that Cee Lo Green was going to perform, but they didn't announce that a few other special guests would be attending.  They were Kevin Eubanks from the Tonight Show, Jim Bonfonti from the Raspberries, and Hall of Famer Darlene Love.  After Cee Lo performed, one fan held up a photo, another held up a CD and I held up a Spin magazine with him on the cover.  He motioned for us to come to the side of the stage.  He came right to us and signed and took pictures.  My friend noticed that Darlene and Kevin headed for the gift shop so we decided to see if we could meet them.  They both took pictures and signed.  I didn't have anything for them but decided to buy a couple of Rock Hall post cards in the gift shop for them to sign. On Memorial Day, Journey and Def Leppard were playing a show in town.  I decided to put in some time and tried to catch them going to the show.  It was time well spent as every single member of Journey signed for the few fans that were there.  Neal Schon was a strict one each, Arnel signed a couple each as did Steve Smith.  However, Jonathan Cain and Ross Vallory signed anything that you had.  I was happy to get four of the five guys on my Escape album.  I know Steve Perry is going to be very tough to get. 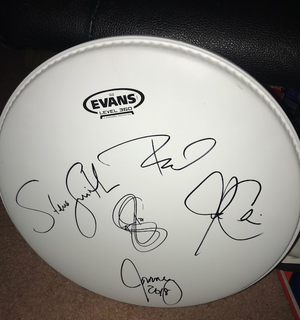 Def Leppard was actually the first band to leave because they were going on first that day.  Rick Savage and Vivian Campbell went right to the bus, Rick Allen stood around the bus and smoked a cigarette  and eventually came over to us.  He personalized everything but I did end up getting him to sign my over sized drum stick which he didn't personalize.  I was talking to him about his art and told him he needed to have a gallery exhibit here in Cleveland.  I then asked if he could sign the stick because it's only for Hall of Fame drummers (I have Max Weinberg, Peter Criss, Bill Burford on it), and said that Def Leppard will be getting in soon.  He laughed and said "I hope not!"  I've found the British bands don't really care about the Hall of Fame. 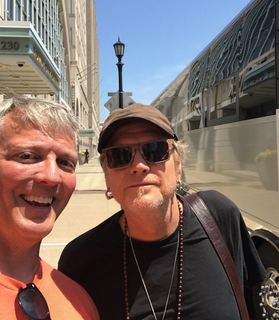 Joe Elliot was the last to leave and he also signed one each for the fans on the way to the bus.  My one friend said it's been about 20 years since Joe has stopped for fans in Cleveland, so I was happy to add him to my drum head (I got Phil and Vivian earlier this year).  Now I just need Savage to complete it. We shall see what June holds for me and my collection.

It's a shame Keaton won't sign Batman stuff. He did a signing with Celebrity Authentics and did a bunch of Batman stuff for them. Unfortunately, the prices are very high.

You can buy signed Tommy Shaw CDs (styx) with him performing with that Youth Orchestra, on one of the websites right now. Really cheap, too.