The comic strip showed a fly in a suit, and somebody has their arm extended with a fly swatter. As the fly is flinching, the guy is pleading, “Don’t worry. I just want you to autograph it!”

That night, I watched Kevin Hart on one of the late night talk shows promoting his new movie “Get Hard” (my review here: http://fox5sandiego.com/2015/03/30/get-hard/

He told a story that he’s now told a few times. It was about being in a bathroom stall and having somebody kick open the door and ask to take a selfie with him. He started screaming at the guy, standing up, and holding his hands over his crotch. Hart ended up calling security, and realized how insane he sounded complaining about this guy that was just a fan (that didn’t have a clue about boundaries). Again, all these selfies people like taking photos with famous folks, and it makes it harder for the autograph collector.

The next day, I went to a movie screening of Al Pacino’s latest “Danny Collins” (my review here: http://fox5sandiego.com/2015/04/01/danny-collins/

Since he’s a famous singer in the film, there are a few scenes with autographs and selfies. The funniest was when he’s getting drunk at a hotel bar, and Annette Bening walks in. She plays the hotel manager he’s been flirting with. He was in the middle of signing an autograph for an older Asian man, and the look on his face when he tries to pronounce the name (as he’s about to inscribe the autograph). And of course, the main “autograph” in that movie, is what the premise is about. His manager (Christopher Plummer) wants to buy him a piece of John Lennon memorabilia because he’s a huge fan. He ends up finding a letter John Lennon actually wrote to him in 1971, when he was a young songwriter that had mentioned him in an interview. The letter was sent to the magazine, and the reporter decided to keep it, thinking it would someday be valuable. Reading the letter makes Collins realize what a pompous jerk he’s been, and he sets about changing his ways. Now, the movie is a little disappointing (did I mention you should read my review?), but in the closing credits, you get to see the folk singer that really had this happen to him. It’s what created this fictional story. 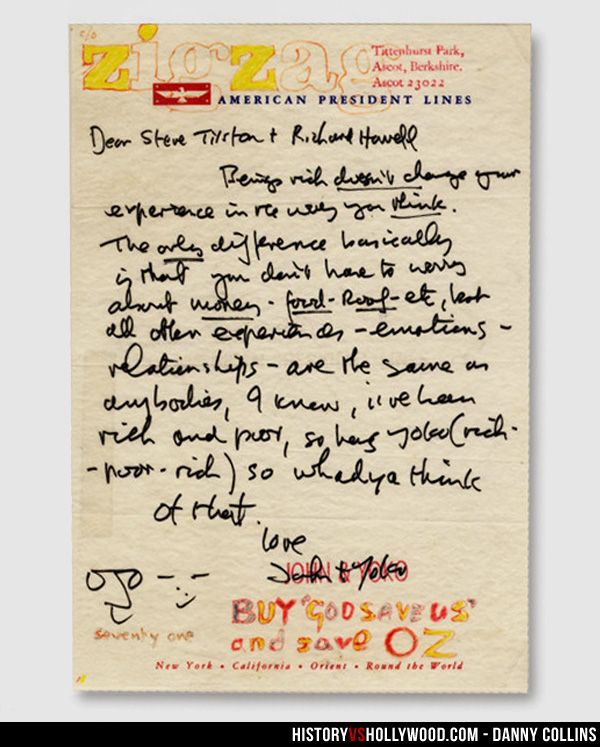 And since it’s all Hollywood stuff for this blog, I’ll close out with this. Memorabilia and art work belonging to the legendary Lauren Becall sold for $3.6 million during an auction with Bonhams. I didn’t see any autographed items, but a cool statue of Humphrey Bogart from Casablanca (one of the best movies ever). There was also a David Hockney painting that went for $11,250.

That cartoon reminds me of the John Mellencamp autographs I got in person in January.  It was "JMP".  I also couldn't buy a vowel!  Better than nothing I guess.  Remember when people took pride in signing their name?  You used to be able to read every letter- now many are a squiggle and a line.

Mellencamp always had a sloppy signature, even when he was a Cougar. But he always signs. I have a great story about him I'll do in another blog someday.

Love your blogs. I'll make sure to follow your reviews. Excellent stuff.