July turned out to be a good month to add the musical collection as there seemed to be more hits than misses.  The month started out by getting on of the original 4Tops, Duke Fakir.  The Four Tops are one of Motown’s original acts and have had a distinguished career.  Duke is the last living original member and the 82 year old still has all of the dance moves down (except he no longer spins).  After the show, I was the only one waiting and asked if he could sign.  Apparently his son is with him and said “Dad, sign these.”  He waved me over, but security stopped me and said I wasn’t allowed by the busses.  I said, “But he waved me over, he said it was ok.”  Security said “that’s against our policy.”  Mr. Fakir’s son then spoke up and said “He’s with me, it’s ok.”  Duke then said, “I don’t mind signing, I just have to watch my steps!”  I can understand the 82 year old not wanting to walk over to me.  I ended up getting my Rock Hall poster and Live Aid poster signed.

Ziggy Marley played a show at the same venue a day later.  There were about 10 other fans waiting after the show and Ziggy eventually came over to us.  There were only 3 people who wanted something signed, the rest just wanted pictures with him.  After I got “Conscious Party” CD signed, Marley said in his Jamaican accent “Anyone else want a signature, mon?”  He then happily took pictures with everyone. 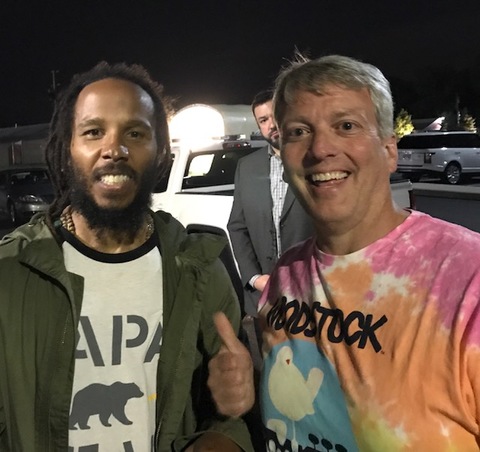 I also added Marshall Crenshaw to my La Bamba soundtrack, Corky Laing from Mountain to an oversized drum stick, Michael Cartellone the original drummer for Damn Yankees and the current drummer for Lynyrd Skynyrd to a Damn Yankees album, and Jonny Lang to my blues guitar. 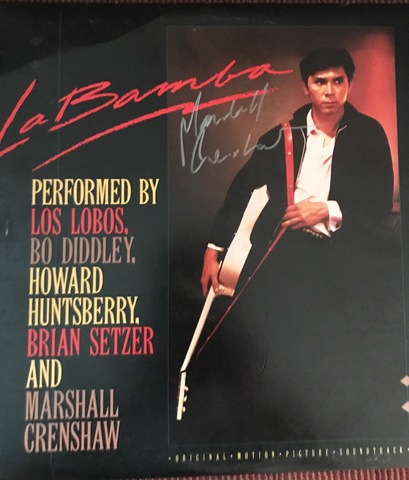 Former 10,000 Maniacs singer Natalie Merchant is out supporting her new box set.  She still sounds great, although she now has long grey hair.  After the show, there were at least 40 people waiting which did not bode well.  After 2 hours of waiting, the crowd dwindled down to less than 20.  About 12:15 am, Natalie finally came out and went right to the bus.  I was kind of stunned.  I said to my friend, “It ain’t gonna happen.”  He said “I don’t know.”  I said “I do, once an artist is on the bus, they rarely come off.”  He agreed and we started walking toward our cars.  When we got to the end of the sidewalk, we heard a roar from several middle aged women.  We turned around and saw cameras (or cell phones) flashing.  Unbelievable, Natalie came off the bus because the women were chanting her name.  She signed for everyone and reluctantly took pictures.  When I asked for a picture she said “Oh, another one?  Why do people want these?  They never turn out.”  But she did it and I think it turned out ok.  I also got her to sign my Tigerlilly flat. 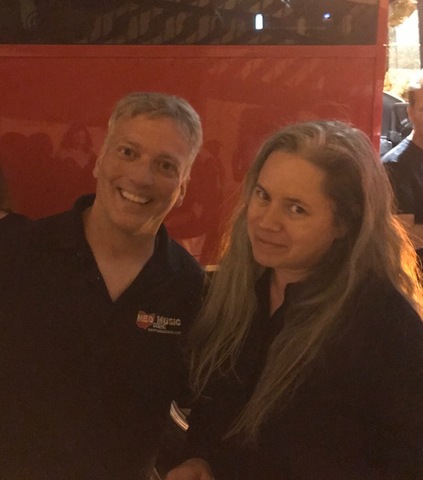 1990s alt rock band, the Gin Blossoms came to town and also sounded great.  The entire band, except the drummer (who went to a nearby bar) either signed in the lobby or came off the bus to meet fans.

British band the Zombies came to town to open a small exhibit at the Rock and Roll Hall of Fame.  The next day, they played a special performance at an Akron radio station.  The only downside was that Rod Argent could not make this appearance.  They were selling pre-signed Oddysey and Oracle vinyl albums by 4 of the 5 original members.  I decided to buy that and I also had a drum head that I had the entire band sign (I drew the logo on). I already wrote about my experience with Roger Waters but I am still very happy to add him to The Wall.

The month ended trying to find Rod Stewart.  I later found out he flew in hours before the show and left right after, never staying the night.  We did run into Cyndi Lauper (I had nothing for her) leaving the hotel.  She did sign items on the bus.  After she left, two tour busses pulled up.  It was Earth Wind and Fire arriving a day early for their show.  I had nothing for them but decided to head to Cleveland early the next day to try and get them before the show. Philip Bailey was the first to exit the hotel.  There were three of us and my one friend had five albums.  Philip said “I ain’t signing all of those.”  So my friend chose two.  Philip signed my HOF poster and then Verdine White came out and said “come over here.”  So I did and he signed my poster and one album.  When I turned around, Philip was on the bus.  So I missed getting him on my album.  Verdine signed everything and was happy to take a photo.  Ralph Johnson then came out and was just as nice as Verdine.  He signed and took photo’s as well.

We asked of newly inducted Rock Hall member, Nile Rodgers was with them and they said no.  We looked for a bus everywhere but couldn’t find one.  So my friend and I decided to go get some dinner before the show.  As my friend was headed to his car, we saw a tour bus at a hotel that we would have never expected.  So we hung out for a little bit and low and behold, Nile comes walking out.  However, he was on the phone and when we asked if he could sign he said “Sorry guys, I’m on the phone with my mom.  I’ll get you on the way back.”  No problem.

We go to the show- which was great by the way- and waited outside the hotel.  Band members were coming and going.  I ended up having a nice conversation with Curt Ramm who played with Springsteen on a few tours.  He said he had a 315 song notebook just for Bruce because you never knew what he might play. Anyway, after over an hour of waiting, his manager who recognized us from earlier in the day said “Wait 15 more minutes and he’ll be out.”  Sweet!  Well, that 15 minutes turned into 30 but he came right to us and could not have been nicer.  He signed everything, took pictures and told stories.  Such a cool dude!  Inside scoop- he said he just wrote a song with Blondie and it rocks.  He said “You’re gonna love it!”  So I have that to look forward to. There were a few misses as well.  Rob Zombie, Billy Joel and the guys from Queen drove right by.  I did get a “thumbs up” from Brian May.  I would have loved to get him.

August brings the Football Hall of Fame so I will try for a few guys in Canton.  On the music front I’m going to try for The Fixx, James Taylor, Bonnie Raitt, Kenny Wayne Shepherd, Chris Isaac, Steppenwolf, Yes, Green Day and Jason Isbell.  We’ll see how many I get.

Awesome blog. I got Crenshaw on the La Bamba album, and...the next day I realized I had one of his CDs and I completely spaced out (when you own thousands of records/cds, you lose track of it all).

I got Corky and the Mountain frontman (a real mountain of a man) Leslie West. It was tough. The merch guy had told us during the show they'd come out and sign everything, but ONLY if you buy the new item. We all bought the new item ($15), and they didn't come out. So I told the merch guy to give me my money back. He didn't want to, and went to the bus. So...Leslie said we could all go on the bus and he'd sign. So, about 25 of us walked, single file, to the backstage, out the door, and onto the bus. He was grumpy, but he signed.

The Zombies I got when they had their first reunion type show (playing with the underrated LA band "Love"). Only the two originals (singer Colin, keyboardist Rod), but they signed after the show. It was wonderful, and they were super friendly.

Natalie Merchant I've gotten twice. She was super mean each time, and sign the two items I had while sighing loudly. One of the times, a few fans had driven from Phoenix, but were too shy to approach her. I called her over and explained the situation. She took a photo with them, but again...didn't seem happy about it.

Lastly, Damn Yankees drummer. I was a DJ at a rock station when they came to town. We got backstage passes, but they had each radio station or company at a different table. EVERYONE in the room, was buzzing about meeting Ted Nugent and looking forward to that. I was a bit more excited about Tommy Shaw (Styx), but the first one to walk out...was the only one NOBODY knew -- Michael, the drummer (and only one not from another famous group). Nobody said anything, so I stood up and screamed, "oh my god, it's Michael !!!" He smiled, raised his hands, and came over to me (and I had him sign the Damn Yankees CD).

Ah, good times. Thanks for helping me remember them all, Coach. You da man !

Josh- happy to jog your memory!  Ted is coming to town later this month and I would love to add him to the DY album but I hear he doesn't do it at the venue and he also charges 20 bucks.  I don't mind paying, but I'm not sure I'll be able to find him.  Tommy is also very tough these days.

Great tales as always. Its always good to hear some of these artists appreciate their fans!