Two Halls Of Fame In Your Backyard Provides Many Opportunities!

I am fortunate to live between two major halls of fame.  Both the Rock N Roll and Football Hall of Fame are about 45 minutes from my house.  The Rock Hall has programs throughout the year and you never know who might show up.  It is the only HOF that does not host the induction ceremony every year (that is a topic for another discussion).  However, you can count on the Football HOF holding their annual induction the first weekend in August.

Hall of Fame week started off by going to a program hosted by Coach Joe Gibbs.  He had Kurt Warner speak and they talked about their football career and their faith.  Afterwards, Joe stayed behind and you could get a picture with and he would sign anything that you had.  I ended up getting my HOF poster a mini helmet signed.  Joe Jacoby was also there and I had him sign my Redskins mini because I believe he will get in the HOF soon.

The next day I got a tip that Joe Namath was flying into town.  So I headed to the airport with several other collectors to see if I could spot "Broadway" Joe.  He comes walking through the airport and said "I'm only signing for the youngster" and proceeds to sign a full sized Alabama helmet.  I thought that was it so I sat down.  Several of the other guys followed him to baggage claim and he refused.  Finally, he got to his car and a woman broke him down.  I guess he said "Alright, one each."  I saw two guys come running in the airport and they said "He's doing it at his car!"  So me and another guy went outside and there he was, signing away!  I brought my Super Bowl MVP Poster that was made for SB XX.  Joe looked at it and I said "Joe, you're right on the end."  He proceeded to sign it pretty big.  I was thrilled!  I believe he was $350 at the last public signing he had.  I did end up getting Terrell Davis, Dave Wilcox and Kurt Warner that weekend. The Fixx also came to town and were great!  They all signed after the show and I got my "Reach the Beach" album signed as well as a 45.  The next night, the Retro Futura tour made a stop in Cleveland.  Katrina, from Katrina and the Waves signed at the merch table after her set, Ivan from Men Without Hats had stuff taken to his bus and  I had 45's for both of them.  My friend and I decided to leave a little early during Howard Jones' set to try for the guy I really wanted- Paul Young.  As we were walking through the casino, there he was.  I asked if he would sign my Live Aid poster and he graciously did.  Score!

As I was at Retro Futura, original E Street drummer Vinnie Lopez was at the Rock Hall hosting an event.  Luckily, I had a friend going to see him so I dropped off my HOF poster and a drum head for Vinnie to sign.  He said he got there and actually had a beer with Vinnie before he started his gig- very cool.

I tried for James Taylor because I heard he is great to fans.  After waiting over an hour, one of his crew guys told us that he was already at the venue and didn't want us wasting our time.  Crap!  One of my friends said he saw a bus at another hotel so I figured that might be Bonnie Raitt so I decided to go for her.  When I arrived, guys were loading up luggage.  A guy noticed me and asked what I had.  I said I have a poster that I like to get Hall of Famers to sign and I have an album.  He said "Here's how it works.  Bonnie doesn't like to sign on the street.  I'll take your items to the bus and she'll sign them there and please no pictures because she's in her cevillian clothes."  No problem!  I see a lady walk out of the hotel carrying flowers.  She had on a big floppy hat and big 70s style sunglasses.  I wasn't sure it was her until I looked under the hat and saw her red hair that had been tucked in.  A few minutes later, the guy comes out with my items personalized.  I was cool with it. 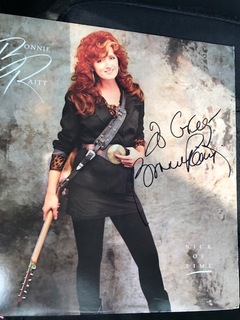 Kenny Wayne Shepherd and his singer Noah Hunt played a four song set at a radio station in Akron that I got to attend.  They both signed and took pictures with everyone afterwards and I told Kenny that I caught a pick from him when he opened for Van Halen in 1998 and I wondered if he had another one.  He went to his amp and picked one up and said "Sure, there you go!" Tim Allen made a rare stop at the casino to do stand-up.  I had tried for Coldplay earlier in the day but they blew us off.  So I went to the casino where two other friends were waiting.  Tim gets out of the SUV and comes right to us and was great!  He signed what we had and took pictures with us as well.  I said "I have the 3 Toy Story DVDs."  He said "You know, we're working on the 4th one right now."  Very nice guy.  I heard he signed after his show too. The same night, Michelle Branch played a small club in Cleveland.  I wasn't going for her, but I was going for her fiance who also happens to be her drummer as well as the drummer for The Black Keys- Patrick Carney.  The Akron native was just hanging out by the bus talking with his dad and brother.  My wife teaches at the high school where he graduated from and he actually spoke to the kids this past spring.  I mentioned that my wife remembered that he and his friends would carry all of their books out in front of their chest and them spill them in the hall so they would be late for class.  I asked if that was true.  Carney started laughing and said "Oh my god, I forgot all about that!  Yeah, we used to do that all the time.  We thought it was funny."  He said they would sometimes get to the second to last step and fall on purpose, spilling their books all over the hallway.  I love hearing personal stories!  He was very cool and signed a Black Keys album and drum head for me. The Yestival came to town, although I didn't get any members of YES- I needed Alan White, I did however get Todd Rundgren who was opening up the show.

Finally, Green Day came to town the day of the eclipse.  There were three tour buses parked outside of the Rock and Roll Hall of Fame.  It was Billy, Tre and Mike.  They all popped out to see the eclipse and I did get Tre to sign their latest vinyl, although it was a crap graph.  Billy ignored and Mike said no.  The cool thing was they had their car from the "Blvd of Broken Dreams" video in front of the hall and they were filming something for the Rock Hall.  All three guys got in the car and eventually took off in it.   This wasn't announced- I just happened to be at the right place at the right time. See, It is cool to have two Halls of Fame in your own backyard!

I think Rundgren was actually singing with YES, not opening, but I could be wrong.

I got Black Keys drummer, although he wasn't friendly. I tried talking to him, and he just kept chainsmoking. But hey...at least he signed my two items (perhaps if I had a story from his school daze, he would've been cooler ;-)

Comment by Paul on August 31, 2017 at 12:52am
Great song!
Michelle nailed it with Carlos, but a lot of artist like Michelle are popular for a seasons and thats it.

Newbury Comics has a signed Michelle cd for sale.

Thanks Josh- Rundgren was the opener for YES.  Actually Carl Palmer was first- and was awesome.  He signed at the merch booth after his set.  Then it was Todd, who played a lot of techno/dance music (horrible) and only played 2 Utopia songs and a fast version of Hello It's Me and a great version of Just One Victory.  Then Yes took the stage.

Ian- I agree- Game of Love is a great song!

An Update to end my August-- I did get Donnie and Marie.  Even though she's had a lot of work done- Marie looks great and was very friendly!

A lot more successes than failures! Ive heard/read that Anderson/Wakeman can run hot and cold with Anderson getting tougher.

Back in the early 2000s, the Pro football hall of fame would hold huge autograph signings with the past and present inductees. They would have between 10-15 previous year inductees signing for $100 total ticket price. Fans enjoyed it, the players enjoyed it and were personable, not much rushing and amazing price. Of course, money talks and the hall went with Mounted Memories to host signings from 2006 on (I think Panini may run it now). Of course, there were no more 10-15 player sessions but rather one player per ticket price with most ticket prices being the $50-100+ range as usual per shows nowadays.