Even though I slowed down a bit, I've added some quality pieces to my collection. E Street drummer, Max Weinberg is out doing some solo gigs since Bruce is busy doing his thing on Broadway.  Max played just outside of Pittsburgh so I decided to make the hour and a half drive to see and meet Mr. Weinberg.  I couldn't pass up the Groupon deal- $19 for admission which also included a draft beer!  How could I say no?

Since I couldn't get there early for sound check, I decided to buy the Meet and Greet- I normally don't do this but I wanted a guarantee that I would get a few things signed.  It was a very fun show as Max took requests from the crowd from the list of songs that were scrolling on screens through out the venue.  Afterwards at the meet and greet, Max signed a few items for me, including a drum head that was a part of the deal.  Unfortunately, his Sharpie was dead when he got to me and changed markers half way through.  Half is light, half is dark.  So I decided to wait after the show and have him sign a drum head that I had Vinnie Lopez sign earlier this summer.  He was more than happy to sign for the 5 fans who waited after the show, what a great guy and another E Street member to cross off my list! 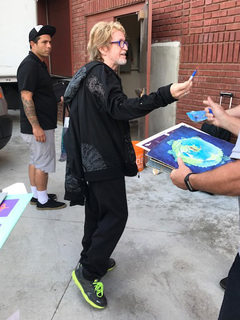 YES featuring Anderson, Rabin and Wakeman made a return trip to Akron.  Last fall I bought an ARW poster at the show and had Rabin, Wakeman and their drummer sign it after the show.  This year I wanted to complete the piece and made it to sound check.  Rabin went right in, Wakeman signed 1 each and Anderson signed a few each.  I ended up completing the poster as Jon and bassist Lee Pomeroy graciously signed it and I also got Jon on The Yes album which had Howe and Chris Squire on it.  I was very happy to get him. Steve Martin and Martin Short are doing a comedy/music tour.  My friend invited me to attend a private event at the Rock Hall that was a listening party for Steve Martin's new CD and Mr. Martin and members of his band were there to discuss the album.  At the end of the talk/listening, Steve signed a few items from the stage.  I was one of the lucky five people and got "Wild and Crazy Guy" vinyl signed- although my wife wanted me to get the DVD of The Jerk signed.  A cool thing is that Rolling Stone has a huge exhibit in the Rock Hall celebrating its 50th Anniversary.  Well, it just so happens that they have the suit that Steve wore for the cover of Rolling Stone and the magazine on display.  Steve went up and took pictures with the display and actually did the same pose!  Did I mention how cool it is to have the Rock Hall in my own neck of the woods? 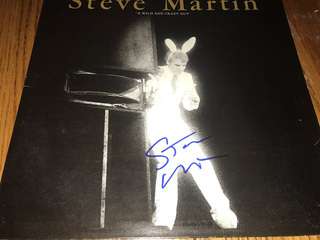 Former Babys and Bad English signer John Waite made an appearance on his solo tour.  He looks and sounds fantastic!  After the show, he was very gracious and racked!  I was happy to have him sign 2 Babys albums and a Bad English flat.  A couple guys had about 10 albums each and John signed them all, and was happy to do it.  He was great! 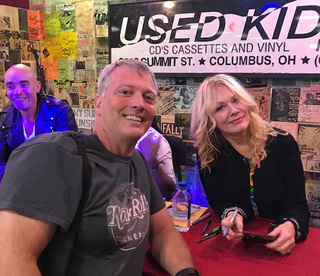 Incredibly, Nancy Wilson's new band Roadcase Royale made a record store appearance in Columbus.  The entire band played a 3 song acoustic set and then signed their CD and poster that was handed out at the event.  They also took pictures with anyone that wanted.  Amazingly only about 60 fans attended this rare appearance on a Friday evening.  Me and two of my friends gladly made the 2 plus hour trek to C-bus to meet Nancy.  The three of us waited out back to see if she would sign a couple albums.  We approached her and she said sure.  We had two albums each and she would have done more.  She said "Why don't I sit in the van and you can hand them to me?"  But by the time she said that, she had signed the six things that we had.  We thanked her and went on our way!  I would have never believed I would have gotten Ann and Nancy Wilson within 4 months of each other.  As far as I'm concerned, Dreamboat Annie and Bebe la Strange are complete with both sisters on them.  The only negative is that Nancy had a silver and wouldn't change to black for Dreamboat.  Beggars can't be choosers! 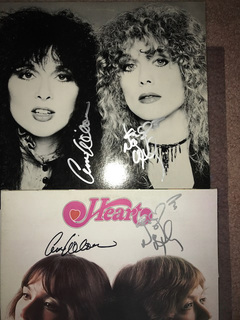 The month ended with a surprise show by Dennis Quaid.  I had no idea he had a band and thought he just mimed the piano playing in "Great Balls of Fire."  But the guy can actually play!  He also plays guitar and sings fairly well too!  His Doors covers were very good!  After the show, he came over and signed for the 8-10 fans that were waiting and took selfies with people too.  He took the selfies himself!  Very nice guy.  I told him I showed my students a clip of his movie when I was going over Jerry Lee Lewis.  He said "Really? Thanks!"  This poster is going on my classroom wall! LA Woman and Riders on the Storm.

Comment by Shawn Pattie on October 17, 2017 at 9:00pm
We had a completely different experience with Max Weinberg in Arizona. There were 6 people waiting after the show and he wouldn't sign anything, in fact he ignored us. It was surprising since I have always heard he was very fan friendly.