October Brings A Variety Of Artists To Cleveland

October has presented itself with not only being able to add to the music collection, but also sports and even some actors!  I write these blogs to let you know who has been signing and who hasn’t, in case you may want to try when they come into your neck of the woods.  I realize everyone has a different experience, and people might change their moods from day to day.

First off, Chris Hillman from the Byrds made a return trip to my area.  He signed from the stage after the show and was great. Another E Street Band member came to town.  This is the 3rd E Streeter this year!  Not complaining at all.  Little Steven and the Disciples of Soul played a great 2 hour and 20 minute show, just a bit shorter than what he is used to playing.  Afterwards, he came out and signed and took pictures with everyone!  He could not have been nicer. 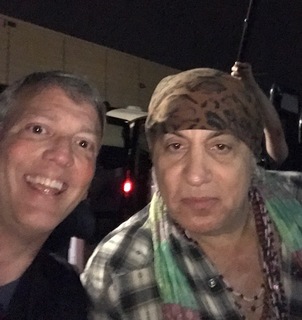 The Fonz, Henry Winkler gave a speech at a Kent State branch campus.  He spoke for 20 minutes- which was funny and interesting- afterwards he signed 1 item each and took pictures for fans who lined up.  Another great guy.  Of course I had to do the “Fonzie” with the real Fonzie.  Aaayy! 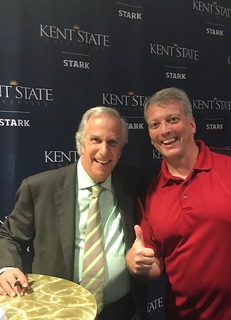 Michael McDonald made a return trip to NE Ohio.  After the show, security guys came out and said that we could only have 1 item each, if there was more than one, then McDonald would leave.  I had three things so I put down my other album and set list that I got.  Michael came over to us and was great.  He signed and took pix with people that asked.  I really think he would have signed more than 1 each but I always play by the rules.

I decided to make the trek down to Chantilly for their show.  Being a big Indians fan, I had to meet Tom Berenger and Corbin Bernsen and get them on my Major League movie poster.  I haven’t paid for an autograph in a while but I decided to bite the bullet.  Since I was down there, I had to get 5 of the guys from another great baseball movie, “The Sandlot.”  None of the guys turned out to be big time actors but I had to meet “Squints” “Ya-Ya” “Repeat” “Timmy” and “Kenny.”   Now that’s two more project pieces I have to work on! 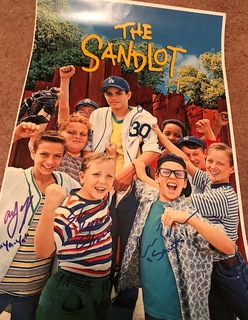 Two former Browns who were both 1000 yard rushers in the same season, Earnest Byner and Kevin Mack made an appearance at a local watering hole to watch the Browns get crushed again.

I did have one miss, and that was Steven Stills and Judy Collins.  I couldn’t make it before the show but two of my friends were there.  They said Steven’s manager took everything on the bus and was great.  Judy also signed before the show but refused pictures.  After the show, Steven was a mic drop and was on the bus.  By the time I left the venue and got to my car, the bus was already pulling out!  We waited about 20 minutes for Judy to come out and she went right to her car, totally ignoring the 6 fans that were waiting.  I guess getting these two before the show is the way to go. The B-52s made a return to Cleveland after a 5 year absence.  There are only 3 members as guitarist Keith Strickland is no longer touring with the band.  I had never seen them before and I decided to go at the last minute- I actually paid for this ticket.  They still sound great and put on a fun show.  Afterwards, I went out back with about seven other fans.  Cindy was the first to come out and was very nice.  Signed everything and took pictures.  Next was Fred.  I had heard that he could be very difficult.  He came right to us and said “I’ll sign anything you have, just don’t take any pictures.”  No problem!  He was great!  One fan asked him to sing the end of “Love Shack” with him so he could play it for his students.  At first he said no, but then said “Ok, you asked for it, but don’t put the camera on me.  What’s your name?” He replied Shawn.  So Shawn sang “At the Looove Shack” like the end of the song.  Fred didn’t say anything at first then blurted out “Tin Roof Rusted!  Shawn you big nut!”  It was hilarious!  Kate was the last to come out and she also said no pictures.  Like Fred, she talked to us and signed everything.  Super nice.

I happened to catch Arlo Guthrie walking to his bus after sound check.  I asked if he would sign and he said “What do you got?”  I replied, I have a Woodstock poster and an album and he said “Sure”  He signed for my friend as well and then went on the bus. 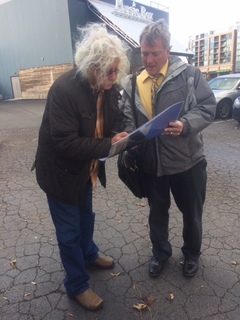 Being a part of the MTV generation, I couldn’t pass up the chance to see Mr. Sister himself, Dee Snider.  Since I got a free ticket I figured I would buy the meet and greet for $50 that they were selling at the merch table.  For “The Price” you had your choice of getting his new CD or vinyl and then got to meet him after the show and he would sign those items (and pretty much anything else you had) as well as a picture with him.  I thought it was a good deal.  I happened to bring “Stay Hungry” with me and found Dee to be very friendly.  He talked with each fan and showed an interest in what you had to say.  It wasn’t just an assembly line where they sign, look up and take a pic.  I wish most artists did this.- You get what you want signed and the artist makes a few extra bucks without charging crazy prices.

I like reading your escapades good hits there good luck with Crosby the worst he can say is f    off!!

Comment by Devon Laney on November 4, 2017 at 7:36am
These are always great Coach. Thanks for sharing.

I was going to go to Judy and Stills show out here, but didn't. They're both really good signers before the show.