The last time I wrote about Mark Hamill in regards to autographs, it was after a series of autographs were popping up showing very funny, and sometimes inappropriate, things he inscribed. It’s something I wish more celebs would do. I’ve had my share that wrote something funny in the inscription, but usually they don’t have time for anything more than a scribble, and the hope to get away before the crowd starts asking for selfies.

On a day when we're seeing online that Hamill wrote a lovely tribute to his late co-star Carrie Fisher, it was another story he was involved in that caught my eye.

On a few talk radio stations in Los Angeles, they talked about Hamill joining forces (get it?) with Assemblywoman Ling Ling Chang. 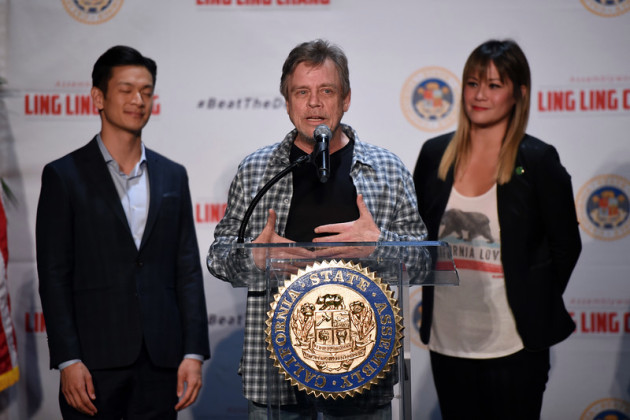 This all stems from the release of The Force Awakens last year. Hamill said a number of fans started asking him to verify his own signature on memorabilia and movie posters supposedly signed by the entire cast. What first irked him was the fact that he was being asked about movie posters his signature was on...and he hadn’t signed a single poster for the new movie at that time. That’s when he realized there was a problem with fans being duped by forgers.

This is no spoiler alert, but Hamill was only in the final scene of The Force Awakens, and it was for about a minute. So he jokingly told fans, “I’ll only initial posters, to reflect my contribution to the movie.”

He did initial a few of them, but usually just signed his entire name. Yet when fans started tweeting him to ask if autographs were real or fake, he started answering. Then the requests started happening so often, he said he’d just “like” the ones that were real, instead of taking the time to respond. He was also noticing an awful lot of fake autographs, that people spent good money on.

Republican Assemblywoman Ling Ling Chang had been working on a bill to crack down on fake autographs. So, there was a NEW HOPE in getting revenge on the ROGUE ONES that forge for profit (I’m on a roll).

The alliance they formed to get revenge of the sith...errr...sick people that have no conscious.

AB 1570 is a bill that requires certificates of authenticity for signed memorabilia sold by dealers in California, and entitle duped consumers to as much as 10 times the cost of the forged item in civil court. State law already offers those remedies for signed sports memorabilia.

Hamill talked a lot about sports fans being treated better in this regard. He also said, “You’re stalked by these dealers that have shopping carts with 50 posters and stacks of photographs.” He explained that when he avoided the dealers, he ended up dissing the real fans that were waiting, and that broke his heart. Although I’d like to ask why he didn’t just scan the crowd, and easily determine who was who. The guy with a bunch of 8x10s, you can say no, or sign only one and personalize it. The guy with the original Star Wars shirt, with an original Star Wars toy still in a box -- sign that. And even then, personalize it. Also, stating “One per person” always works well, too. 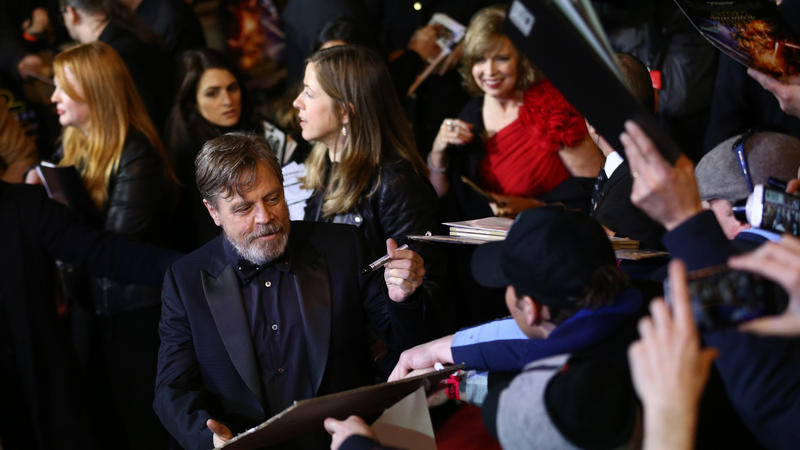 I do love hearing that Hamill has surprisingly given so much thought to all this. He explained that he used to alter his signature, seeing if the forgers would follow suit. They did. He also thought if he signed lots and lots of things, flooding the market with his signature, would that make less valuable stuff out there. It didn’t.

There are a few things I’m wondering about this bill. First, who is considered a “dealer”? Do they have to be making a living doing this, or can the person that sells one or two things on eBay be considered a “dealer”? Second, who issues these certificates of authenticity? We all know about cases of those being bogus, or in cahoots with the forgers.

We’ll see what happens. And may the force be with you (and not dry out your Sharpie).