I was saddened to hear of the death of Burt Reynolds today on the radio, but it wasn't unexpected. The last movie I had seen him in, late last year, was called "The Last Movie Star" and he looked like he was in bad shape doing it. It was a great role for him, done by talented director Adam Rifkin (my review here: https://fox5sandiego.com/2018/03/19/the-last-movie-star/

I was born in the late 60s, so his career was blossoming as I was growing up. I was a little kid when he did "Deliverance" but when they showed it on regular TV (despite having the rape scene edited out), it wasn't an appropriate film for a small boy. Yet it blew me away. Of course, we all loved "The Longest Yard."

I'd laugh as he'd saunter out on The Tonight Show with Johnny Carson (although I don't remember the times he ever guest hosted).

It also made me laugh when underrated comedian Norm McDonald would impersonate him on Saturday Night Live (remember he wrote the name "Turd Ferguson" on his screen in the Jeopardy! sketch?) When I was about 13-years-old, I came across an address I heard was his. I sent him a fan letter. I mentioned all the movies I loved. I asked him if he could send an autographed photo. I didn't realize that if you make an autograph request, you're supposed to send a Self-addressed stamped envelope. I even had the nerve to ask for a specific picture. I asked if he had any 8x10 shots from Deliverance or Longest Yard.

A month later, a huge envelope arrived, with a picture autographed and inscribed to me.

I wrote him in the 90's. Secretarial? 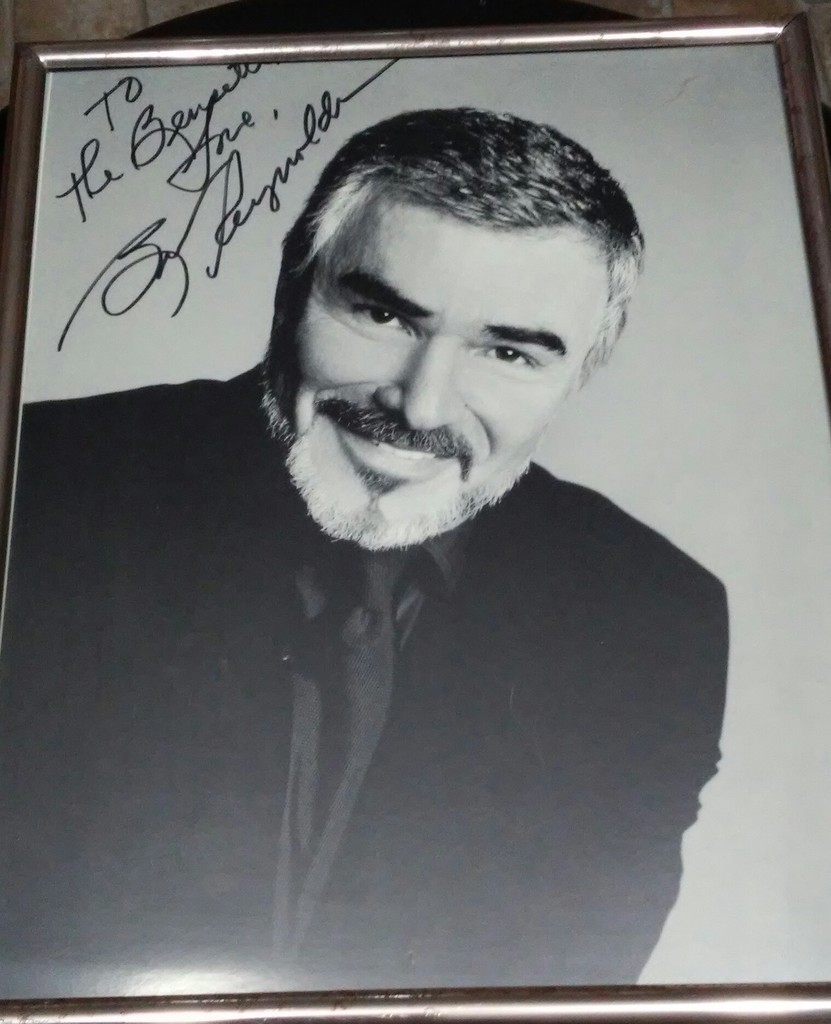 awesome salute josh! I wrote him ttm  a few years back and he sent me an autographed picture personalized but it said from the both of us which was kind of funny!

Well, didn't Jerry Reed also die? So, I think it makes more sense to say the Bandit will be reunited with him...running from cop Jackie Gleason...instead of Elvis! hahahah

I used to periodically see Burt on the Barrett-Jackson auto auction shows when he'd sell on of his cars. Great guy and was always accommodating to his fans, especially the youngsters. One of the very few nice guys in show biz. The first time I remember seeing Burt was on the TV show Perry Mason back in the early Sixties. Raymond Burr was defending Burt who had been--as usual--wrongly accused of a murder. While Burt's acting talents may have been limited, he definitely had screen presence AND charisma.

His acting was actually underrated. Take a movie like Deliverance....amazing. And, the movie Sharky's Machine (which I believe he directed). It's more than just then just the usual cop thriller. His acting is great in it.

You are definitely on the mark with Burt's performances in "Deliverance" and "Sharky's Machine."