Having been born and raised in San Diego, and a huge music lover, I was always a fan of Steve Poltz. His first band The Rugburns had great live performances, and clever songs. The band was filled with other talented San Diego music legends. Poltz ended up being named “San Diego’s Most Influential Artist of the Decade.” He had songs that were rock, folk, punk, satire...hell, he did an album of tunes that were all answering machine messages (appropriately named “Answering Machine”). The Rugburns album “Morning Wood” and his solo CDs “Chinese Vacation” and “One Left Shoe” are favorites of mine.

He’s also known as the guy who wrote songs with Jewel, including the 1996, #2 hit “You Were Meant For Me.” (he also appears in the video). You’d think a guy that had such success with that would hate interviews always bringing that up, especially when he has so many other terrific songs. Yet he’ll appear on a radio show and perform that song when requested, often with funny stories thrown in the middle of it. 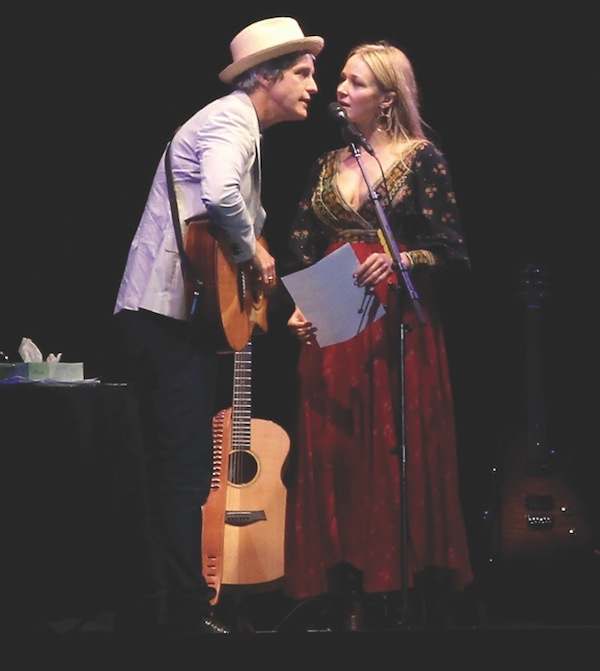 I had seen Steve Poltz in concert many times, but had never asked him to sign a CD. It wasn’t until a guy I played racquetball with told me he sometimes sees Poltz in a bar he frequented. I ended up giving him a Rugburns CD to have him sign. When we played a few weeks later, he told me he got the CD signed. Sort of. He gave it to Gregory Page, another San Diego music legend, who is friends with Poltz and was in the Rugburns with him. Page was a bit buzzed and said, “Poltz is touring Denmark or somewhere right now, but I can sign it. I know what his signature looks like.” He then proceeded to write his name, adding the flowery curly-cue things Poltz put at the front and end of his name (Perry Farrell does something similar). My friend thought I’d be pissed, but I just laughed. It was classic Page/Poltz.

When I was at a concert Poltz was playing six months after this, I told him the story. He laughed as he continued signing CDs for fans. He handed me a copy of his latest CD and signed it. He refused to let me pay for it. And a friendship was born.

When he posted a story on Facebook recently about signing a poster for a fan and messing it up, I thought he’d be a good person to interview about autographs. JOSH BOARD: What is the weirdest place you've ever been when asked to take a selfie or sign a CD? Julia Roberts said it was the week her first movie was out (Mystic Pizza), and she was in a bathroom [Julia Roberts/Poltz Fun Fact: one of his songs was used in her movie "Notting Hill"]. Someone slipped a piece of paper and a pen to her under the stall.

STEVE POLTZ: Oh wow. I’ve been asked to sign CDs while peeing. But it’s usually at a show I’m playing and there’s not a backstage toilet. I’m not that recognizable in the general public (which is awesome) because I’m not Sting. However, the people who dig what I do, really seem to dig it, so that’s always nice. Usually if it’s in the loo I’ll say “lemme wash my hands first because my pee has blood in it.” The person usually starts laughing super hard and then I say “I’m not kidding. Look!” Then they start laughing even harder and I scream, “Someone call the paramedics! My pee is contaminated.” Then I usually sign the cd or vinyl and pose for a photo, with the urinal behind us as window dressing.JOSH BOARD: Where is the weirdest place you've been recognized, and asked to take a selfie or sign an autograph?  Julia Roberts said her first autograph...somebody slipped a piece of paper and a pen under the stall at a bathroom. It was the the week her first movie (Mystic Pizza) came out.

JOSH BOARD: Has anyone ever approached you, thinking you were someone else?

STEVE POLTZ: At least once a day someone says, “Hey Charles Manson! I thought you were dead.” 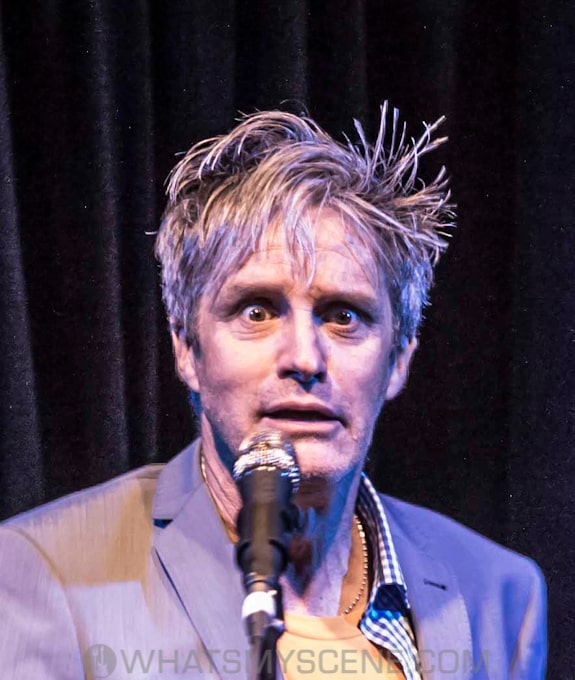 JOSH BOARD: When you played shows with Jewel, did you ever see any funny things happen with people that approached her for autographs?

STEVE POLTZ: She does these VIP meet and greets and when I was on tour with her she’d usually bring me along because she’s kind of shy. She’s about armpit height on a lot of these dudes and everyone is kind of nervous because it’s so awkward. She usually gets sucked right up into a sweaty armpit.  So the top of her shoulder will get DNA sweat so she’s learned to not have bare shoulders and to wear something that she doesn’t mind getting sweat stained.

JOSH BOARD: And on the Jewel topic, when I saw J.J. Cale perform at the Coachhouse, I had two albums for him to sign. His wife was a backup singer, and I asked her to sign the album (since she co-wrote a few of the songs and sang backup on the record). She smiled and said "Nobody has ever asked for my autograph, just his!" So, when Jewel would be signing the "Pieces of You" album for a fan, did you ever say, "Uh...I co-wrote the hit song. I was in the video. You want me to sign it, too?"

STEVE POLTZ: Ha! No, I’m very cool with flying under the radar. I will say this though— one time I was driving in Pacific Beach and it was right after “You we’re Meant For Me” broke big and these four girls in bikinis were singing along at the top of their lungs. I pulled up to them at a red light and they looked over at me and smiled and I said, “Hi, I wrote that song with Jewel” and I my voice kinda cracked like Peter Brady’s from “The Brady Bunch.” They just looked at me with disdain and said “Yeah right. Idiot”. That was cool!

JOSH BOARD: When I interviewed Ice Cube, and asked him the weirdest thing he ever was asked to sign, he smiled and said "a tittie." I realized...that may be the most common answer with musicians. What are some of the weirder items you've been asked to sign?

STEVE POLTZ: I was playing Woodford Folk Festival in Queensland Australia and I was on the huge stage playing to about 5,000 people and I have this song called “I Want All My Friends To Be Happy” and in this song I ask the audience to help me tell cancer to F off. Well, there was this woman in the crowd who was a breast cancer survivor and in the middle of the song she ran up to the stage and threw something at me. It hit me in the head. It was super soft. Scared me though. I looked down and noticed it was a prosthetic breast. She’d had her right breast removed from cancer. So I stopped the song and in front of all these people I said “Is that your breast?”

Well,  in this Aussie accent she says “Yeah mate. I lost my right boobie to cancer. Will you sign it?” Well, Aussie audiences are pretty funny and they were howling. So I pulled out a sharpie and signed the prosthetic breast. I went to throw it back to her but she said “Will you put it back in for me?” So I complied. It was super cool!

JOSH BOARD: That reminds me of a concert story Keith Urban tells. Between songs a woman in the front row asked if he’d autograph her leg. He thought that was an odd request, but he said “Sure, come on up here.” He looked to the side of the stage, wondering why she wasn’t coming up onto stage. He heard a big thud, looked down, and noticed she had tossed her prosthetic leg onto the stage. He was shocked, but signed it. I don’t believe he was the gentleman you were and re-attached it.

STEVE POLTZ: Well, the next day, I had another show on a different stage and in the middle of my song something got tossed up on stage and hit my knee. I looked down and it was this dude’s bladder bag. I said “Oh come on, man. No way. This thing is wet. I can’t sign it.” JOSH BOARD: One of the things I like about reading your facebook posts and reading your rants and thoughts...is seeing how much you love movies and music. Since you're a fan of the arts, is there anybody you've ever asked for an autograph from?

STEVE POLTZ: I’m a huge Elvis Presley fan and when I was a kid I got to meet him in Palm Springs [where he lived for awhile]. Our neighbor ran the airport and alerted my sister and me. He said, “Elvis will he landing in a private plane at 3pm. You guys can meet him if you like.”

So we rode our bikes on the tarmac, obviously pre 9/11, and Elvis waited for us to come to him. He gave me his autograph and picked me up and swung me around and around. He was super cool. I wish I still had that autograph. He hugged my sister for a really long time and I said “It’s ok Elvis, you can have her!”

JOSH BOARD: Knowing how you're a big baseball fan too...in the following, if you could get one autograph from anybody (living or dead), in each of these categories, who would it be -- baseball player, guitarist, singer, actor or actress, and historical figure.

JOSH BOARD: Any other autograph stories you have? It could be something you witnessed, and had nothing to do with.

STEVE POLTZ: One time I was an altar boy in the Catholic church, St Theresa’s. Bob Hope came up to communion on Easter Sunday. I had to hold the gold plate under his chin while the priest fed him his communion wafer. Altar boys were told to catch the host of it, if it accidentally fell outta the mouth. So the priest said “Body of Christ” to Bob.

Bob stuck out his tongue and said “amen father” and he winked at me. Then the host rolled off Bob’s tongue and off the gold plate and I dove to ground and caught it on the plate before the wafer could hit the ground. We were told that the communion wafer was Jesus’ body and could never hit the ground. So I saved Jesus’ life! After the service Bob Hope gave me his autograph and tipped me 5 bucks like I was a maître d’. It was 1970, so 5 bucks was a lot of money.

If you ever get a chance to Steve Poltz in concert, I highly recommend it. In fact, if you see him, and don’t have a blast -- I’ll give you your money back.

If you want to find his next show, or order one of his many great CDs, go to his website: https://poltz.com/words/