He’s long been a huge Beatles fan and recently, it was revealed that he hasn’t spoken to Sir Paul in over 14 years. You know why? BECAUSE OF AN AUTOGRAPH REQUEST!!!!! 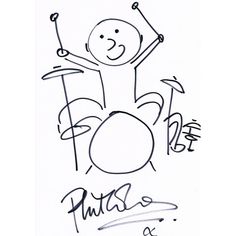 Yep. All of us autograph collectors have been there. I waited awhile for Tom Petty at San Diego State, and he showed up looking stoned out of his mind. Me and a few other fans were waiting, and when we asked for his autograph, he just smiled and walked by us. It was more disturbing when his guitarist Mike Campbell got out of the van. Nobody knew who it was. I said, “Hey Mike...can you sign my Torpedoes album?” (I was even wearing my Damn the Torpedoes shirt). He just walked right by, not even smiling.

So, it’s nice to know things like this happen to celebrities.

When I originally heard this story, I thought it happened at Lindsey Buckingham’s place. It was at a bit nicer venue. It was Buckingham Palace. Phil Collins asked McCartney to sign his 1st edition book “The Beatles” by Hunter Davies. He approached and said, “Hey Paul, do you mind signing this for me?”

Paul looked at wife Heather Mills and sarcastically said “Oh Heather, our little Phil’s a bit of a Beatles fan.”

In an interview with The Sunday Times, Collins said “And I thought, ‘You fu**, you fu**. Never forgot it.”

Collins said he still resents him for mocking his autograph request, and added “McCartney was one of my heroes. But he has this thing when he’s talking to you, where he makes you feel…’I know this must be hard for you because I’m a Beatle. I’m Paul McCartney and it must be very hard for you to actually be holding a conversation with me.”

[side note: I can’t figure out if Paul said that and refused to sign the book, or if Phil still got his signature]

Collins recently wrote his autobiography “Not Dead Yet” -- a title that’s a reference to how much booze he drank and how it almost killed him. He remarried his third wife (who is 20 years younger).

I was recently invited to a movie screening and dinner with his actress daughter Lily, and Warren Beatty -- who are in the new Howard Hughes movie “Rules Don’t Apply.” I ended up not going.

I’d love to someday get Collins to sign one of the album covers I got from the early Genesis days (Foxtrot and Nursery Cryme); because I was once dating a woman who was friends with artist Paul Whitehead, who painted the album covers (of course, at the first dinner party I met him at in L.A., I had him sign the covers). 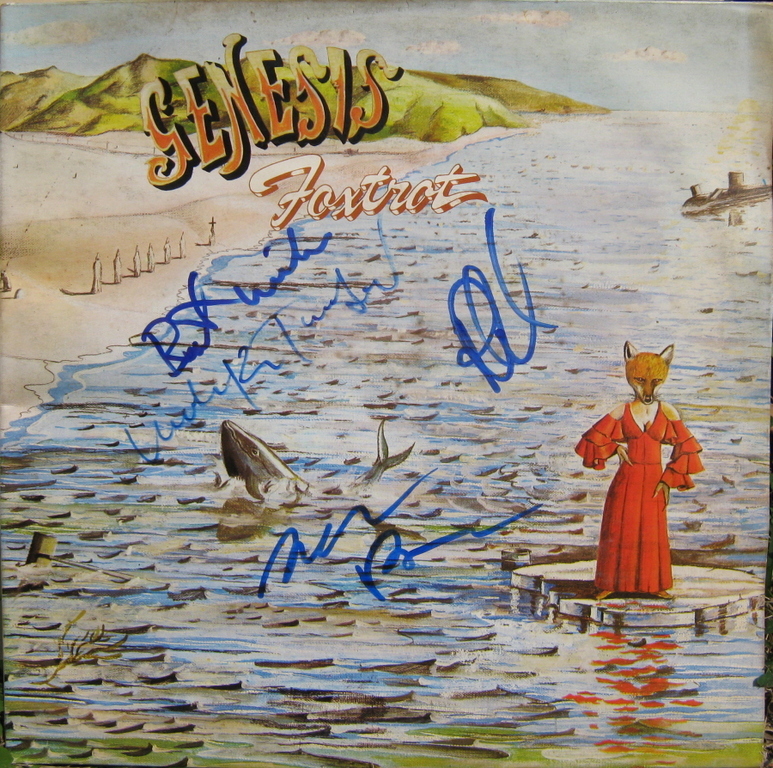 Anyway, I’m anxiously waiting to hear what McCartney has to say on this topic. Most people that have met him say he’s a classy guy. I have Collins beat. When I first met McCartney at a benefit in Beverly Hills (that cost me $500 to get in), he was walking with Heather Mills. I handed him a Sgt. Pepper album to sign. He stuck his finger in my face and snapped, “No autographs tonight!!!”

Comment by Paul on October 18, 2016 at 3:08am
Paul should have said,,hey Phil how about a blunt in the toilets, one for the beatles.

Funny what offends some people. I would be thrilled just to be in the same room with Sir Paul. Denying me an autograph would have meant nothing to me. Same would go for Phil too.

Maybe it's just me but when I make a request to anyone I also feel it's their right to accept or decline. I would not hold a grudge especially over that many years(disappointed maybe). Of all things important in life an autograph request seems quite trivial.

That's a nice story. I've pre-ordered signed edition of Phil's autobiography so looking forward to read it shortly! In regards of McCartney, when I met him twice in 2013 he was extremely nice and signed for 10-15 people each time (incl. Beatles albums), even commenting I've got a good accent (lol!). Heard he tends to be moody though and is now harder to get.

Yeah, Paul is really hard to get these days. He was a lot better years ago.

Regarding the comment about "just being happy to be in the same room"...well, it's different for somebody like us, versus somebody that is already famous. Phil Collins probably felt like ... he is almost on the same level as Paul. He shouldn't be "talked down to". Does that make sense? It's like the time I was in an NBA locker room, and a handful of people were waiting to meet Michael Jordan (he was kind of a jerk...Barkley was great, though). I was standing there, and who was standing next to me -- but a championship boxer -- Terry Norris. Jordan didn't recognize him, and he didn't say who he was. He just wanted to shake his hand. But..imagine if he introduced himself and Jordan said, "Oh, isn't that cute. This little boxer, with his cute belt...and he wants to meet an NBA superstar."

Also, thank all of you for not saying that...I have something else in common with Phil Collins. I AM GOING BALD!!!!

Comment by Adam Halloran on October 18, 2016 at 11:52am
“McCartney was one of my heroes. But he has this thing when he’s talking to you, where he makes you feel…’I know this must be hard for you because I’m a Beatle. I’m Paul McCartney and it must be very hard for you to actually be holding a conversation with me.”

I am not too surprised by this, George Harrison seemed to feel the same way about Paul talking down to him. I love Paul and Ringo more than just about any living artist, but they seem to have a snobery and not as working class as rhey claim.

I think that Paul may meant that NICE..... He is about 10 years older than Phil so Paul´s career started years before Phil´s and it´s pretty good to presume that Phil was influenced by Paul´s music, isnt it? Actually it reminds me B.B. King´s attitude towards Eric Clapton for example when he used to introduce Eric as "the young man" or in similar way - that definately wasnt mean in bad way. It´s funny to see 85 years old man to introduce about 20 years younger man almost like "musical son", in Paul´s case - it could have been described as Phil was something like Paul´s younger "musical brother".... :)

Here's the thing, guys. Think about what Paul actually said. It's not really cool. He didn't say "Oh, how cute...another Beatles fan." He said it in a very condescending way. Imagine you're in Collins' shoes, and...you already feel a tad self-conscious asking another artist for a signature. And when they say that, instead of "Oh sure, mate...hand me the book. I'll sign it."  Even if he would've made a joke like "Okay. And next time I see you, you're gonna sign my Genesis album, right?" ANYTHING, but what he did.

Now, here's an example. It's the 1988 NLCS. This is right after Kareem Abdul Jabbar won his 6th ring in June. He's being interviewed, and Dodger first baseman Mike Marshall asked him to autograph a basketball. Look at him in the background admiring the signature on it? Now...do you think Kareem said, "Oh, how cute. A Dodger player wants an autograph from a member of an LA team that actually wins championships." As he patted him on the head. NO! He signed the ball for him. (photo here): 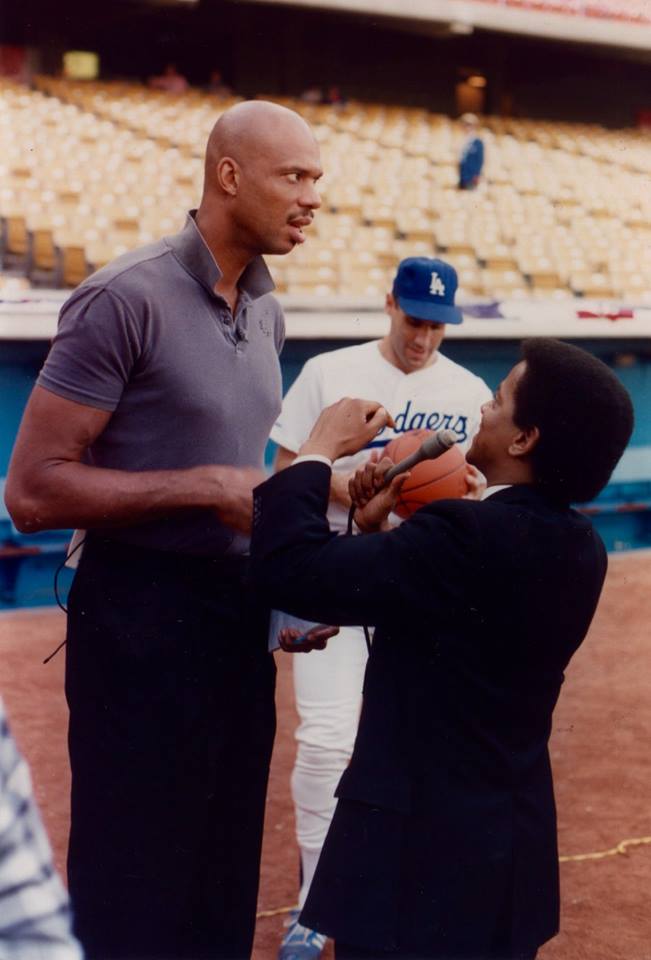 Paul may have been putting on a show for Heather!