Sports Shortz -- Muhammad Ali, Babe Ruth, and much, much more

The Oscars have a rule most people don’t know about. If any Oscar winner tries selling their gold statue, or anybody in your family does – the Academy can buy it back for $1. Well, the Olympics have no such rule. That means last year someone got easily one of the coolest pieces of memorabilia ever – Jesse Owens’ gold medals from the 1936 Games. Don’t feel like ya missed out. They went for $1.4 million. 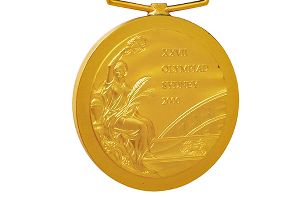 If you were looking for an Olympic gold medal and weren’t willing to pay six figures…well, you did miss out. Vin Baker, a former 4-time NBA All-Star, sold his. The 6’11 power forward was on the 2000 Olympic team in Sydney. His NBA career was sidelined from alcoholism (according to many reports), as well as his weight ballooning up to 300 pounds. He made over $105 million in his career, but after some failed investments and restaurant closures, he was forced to sell the gold medal. It’s the first gold sold from a U.S. men’s basketball player since they started to let NBA players in back in the early ‘90s. For some reason, Carmelo Anthony sold the bronze medal he got from the 2004 games. Not sure why Melo needed the $14,000 it brought in. He’s still a big name and can get endorsements. Baker’s gold went for just under $68,000 at Grey Flannel Auctions.

In one of the more interesting autograph stories you’ll hear in the sports world, this one involves St. Louis Cardinals newcomer John Lackey. He wanted his old #41. You often hear about players wanting to keep their number and when joining a new team, having to buy it from the player that’s already wearing it. It usually involves nice gifts. On rare occasions money changes hands. 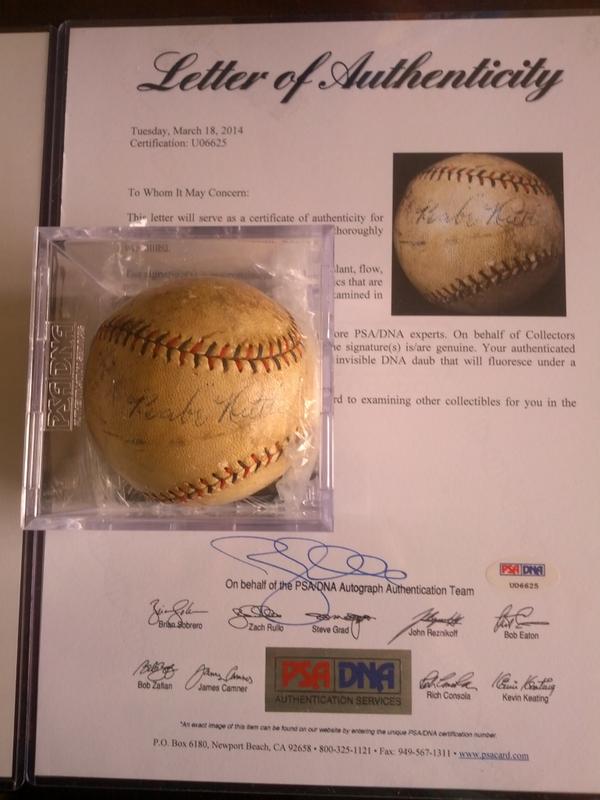 Well, teammate Pat Neshek gave him the number, and went with #37. For this nice gesture, he was given an autographed Babe Ruth baseball. Neshek put photos (including the letter of authenticity, of course) on his Twitter feed.

Now, we’ve all talked about the bogus autographs we’ve seen on Pawn Stars and Antiques Roadshow. Well, I didn’t see this episode, but they recently filmed an episode with a person that had interesting baseball memorabilia.

It was the largest sports memorabilia find in the history of the 19-year-old show, claims producer Marsha Bemko. And…just what did this collection contain? Signatures and rare baseball cards from Boston Red Stockings (doesn’t sound as cool as Red Sox, does it?) players. The owner inherited it from her great-great-grandmother, who ran a boarding house in Boston where the team lived in 1871/72. It has been appraised at $1 million. As a boxing fan, I’ve put together a nice collection of pugilist signatures over the years. My favorite is an Archie Moore signed glove, and the fact that he did a fist bump with me before signing it (he told me he couldn’t shake hands because his arthritis was so bad). I said, “Hey, this is great. I can now tell people Archie Moore punched me.”

Anyway, these gloves came from the match that was billed the “Fight of the Century” in 1971 -- Muhammad Ali vs. Joe Frazier. Heritage Auctions put them up they went for around half a million dollars.

They came from the collection of the late Hall-of-Fame trainer Angelo Dundee. His son put the father’s collection of boxing memorabilia up for auction to pay family medical bills.

The gloves that were also in that auction in 2012 were from Ali’s first heavyweight win against Sonny Listen in 1964. They went for the same amount, but when auctioned later, went for $836,500.

And for those that don’t know boxing history and wonder the outcome of the Frazier/Ali fight…Smokin’ Joe won it in 15 rounds.

I saw Archie Moore at the boxing hall of fame inductions shortly before he died.He had the most massively inflamed knuckles.  It must have been painful for him to even hold a pen.

Every boxing fan (and autograph enthusiast) should try to get there.  It is a very cool small town event with some of the greatest fighters.  It's hard to believe that the IBHOF is little more than a one man operation.

Carmelo Anthony definitely hasn't needed the money. He just signed a five-year 124 million dollar contract to keep losing in New York. The story goes he was embarrassed by the medal being only Bronze and gifted it to a family member who promptly put it up for auction.

Thanks for that story, Brick. Wow. I would've kicked the family member in the balls! I can understand a bronze isn't as cool as a gold or silver, but...dude doesn't realize it's an Olympic medal. Check this out. Ali threw his Olympic gold into a river somewhere (he was pissed at the country or whatever). I think James Cameron should stop sending vehicles to the bottom of the ocean to look for shipwrecks, and go find that damn thing!!!!

Sidney -- I'm a huge boxing fan and would love to see the Hall of Fame. I read a coffee table book on the history of boxing as a teenager, and it blew me away. I once fought professional fighter Paul "the ultimate" Vaden (who ended up killing somebody in the ring). And what I did to him is...well....one of my favorite stories of all time.

More great writing by Mr. Board. Great deal for Pat Neshek! What a year he's having. Last night was his first bad outing of the year. Amazing the gloves sold for 385K and only two years later sell 836K