Star Wars Autographs by the Numbers: Which are the Rarest? Watching different Star Wars actors sign autographs for the last few decades, I started trying to figure out the numbers. How many pieces have been signed? How much value should be attached to each autograph? What are the prices that these actors charge vs. what the actual value should or could be?

So I started by using what I felt could be considered round average numbers for ease of understanding.

Using 20 weekend shows worldwide per year, with an average of 2,000 signatures per 2 or 3-day show in the last 25 years. If you feel the number of signed items per show is high, I can understand your concern, but it is realistic if the signer doesn't sign that much assume the remainders are easily filled out with private signings and trading cards for Topps etc. I believe these numbers are quite reasonable.

Sure at some events the guest may sign less, but there are certainly events where they will sign far more. Remember, even if you don't see lines for these guests at a show, that doesn't mean that the promoter doesn't have a mountain of stuff that the guest is contractually obligated to sign.
These figures put our most common Star Wars signer at about 1,000,000 autographs. Dave Prowse is likely the best candidate for this number. Jeremy Bulloch and Peter Mayhew are probably really close. Kenny Baker likely made as many appearances but was a much slower signer, while the number may seem low, I am putting Kenny at the 500,000 mark.
Anthony Daniels has limited his signing appearances sometimes to only 1 or 2  per year. I put Anthony at the 150,000 level. 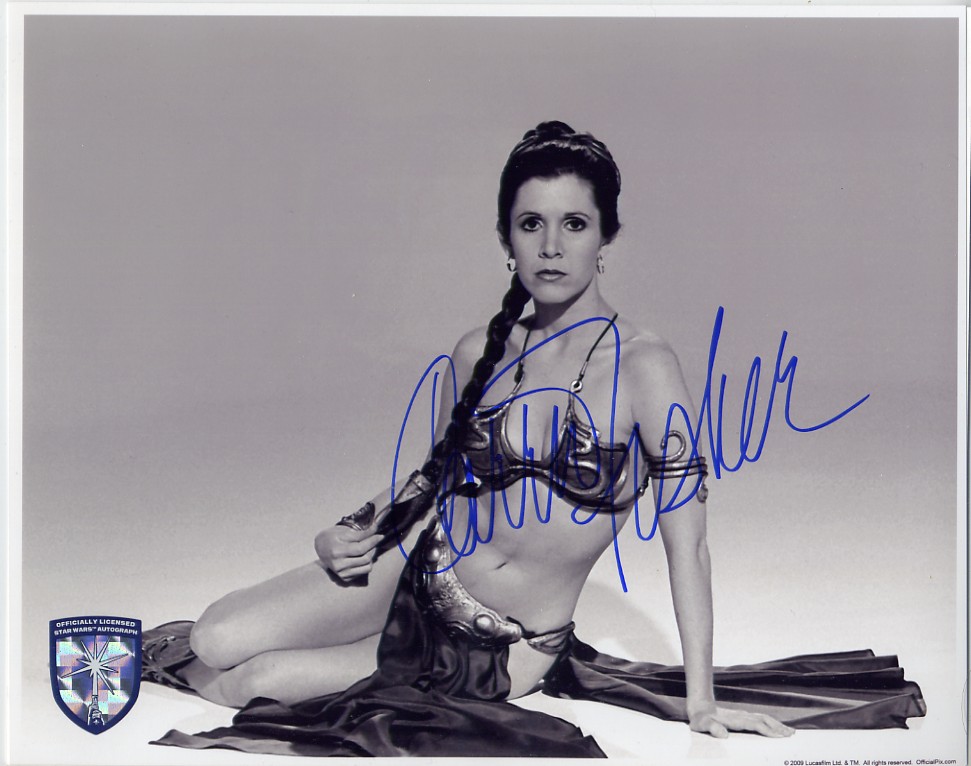 Carrie Fisher didn't really start on the show circuit until 4 or 5 years after the other cast members, but her draw at shows has easily put her in the 150,000 range. Mark Hamill has done a handful of shows but the fees he or his agents have charged for his signature have always been higher than the rest. I am putting Mark's numbers at about 50,000-75,000. Harrison Ford for decades was the guy that you had to go out and try to meet in public. He still doesn't do autograph shows, but he has done some private signings and has signed some material for specialty products and trading cards. If we guesstimate the number of these private signings to maybe 10 events with an average of under 500 pieces signed. We can put Harrison in at under 5000 nice sit-down autographs. Alec Guinness and Peter Cushing were both generous signers via their home addresses. My rough estimates place Alec's Star Wars signed items at about 2000 pieces. Peter likely signed maybe 200-300 with 90%+ of those items inscribed to the fan. 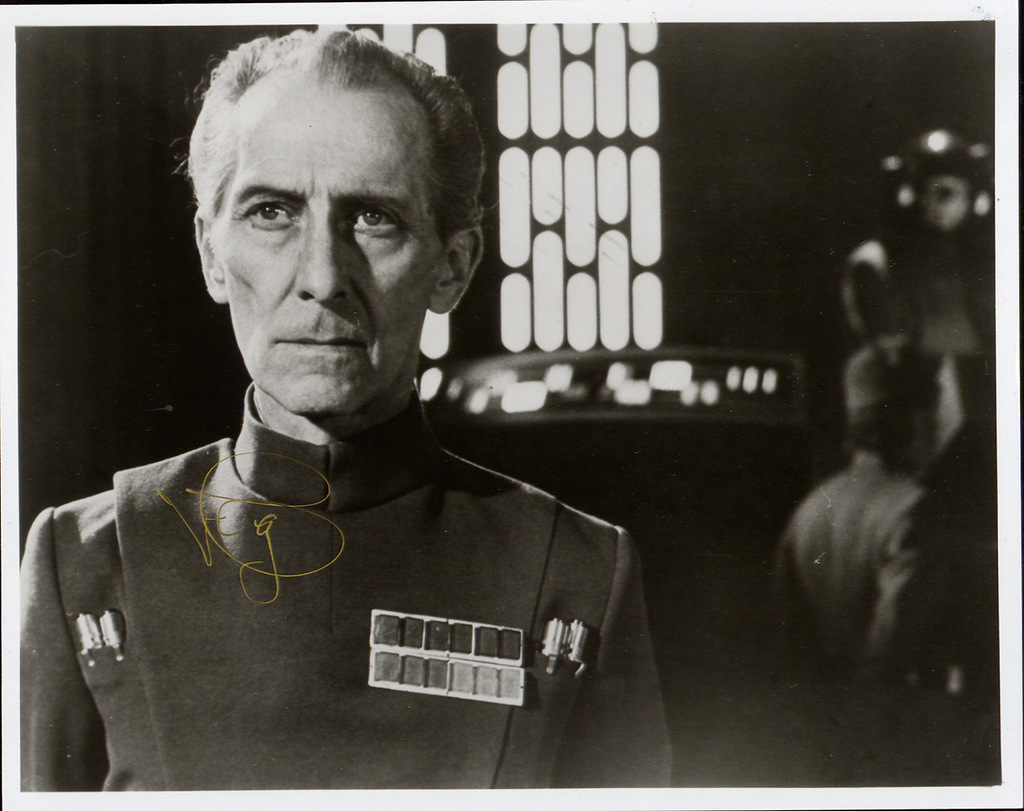 Speaking to a number of active TTM autograph hunters and dealers, if they attempted mailing requests to Mr. Cushing between 1977 and 1985, a large percentage of material sent was Hammer Horror film stills and Sherlock Holmes items. Star Wars images were not good sellers and only existed in press kit images and lobby cards. By 1986 Star Wars was forgotten by most, and it did not see a huge resurgence until 1995-1997 (a year or more after Peter passed).
I know we don't live in a perfect world, but if you crunch the numbers:
You can adjust the main numbers anyway you want.....cut down the number of shows a year, the number of years the signer appeared at shows, or even the average number of pieces signed at a weekend show.
The fact remains that some Star Wars related autographs are in such great supply, you should be very careful in what you choose as a good autograph to collect. That is, of course, if you are seeing your hobby as a possible future investment.

I wonder what percentage of items obtained in the 70s and 80s and even 90s survive today in "collectible" condition. It certainly factors into the rarity of the Guinness and Cushing Star Wars stuff, and when one does come up for sale, people are willing to overpay simply because they may not get a shot at another.

Any guesstimate on McDiarmid, Reville, Shaw?

McDiarmid, Revill and Shaw are each at 3 very different levels. McDiarmid has done a number of private signings and even attended a couple of autograph shows. After years of avoiding signing Star Wars memorabilia he has embraced it pretty whole-heartedly when fees are involved. So much so that he has dropped his own value pretty drastically, with his first signings demanding $250-$300, the next waves were reduced to about $150 and recent signings at about $75.

Clive Revill has always been a throwback to vintage Hollywood and proves that regularly by never refusing a signature. Be it TTM or inperson, he is a ready and willing signer even now into his middle 80's. We can likely discuss a value for his autograph, but for the cost of a photo, some envelopes and stamps, chances are very good that you will get a nicely signed item from him.

Sebastian Shaw is entirely different situation from the other two mentioned above. Sebastian never had any images of himself in the Anakin make-up, as he was not even featured in the press kits for Jedi, his role was a pretty big secret. He wasn't easily found to write to in the time following Jedi, but those that did, got small headshots like most of the British actors used for replying to fanmail. Sebastian passed away in 1994, leaving less than a decade for fans to locate him, with 8 or 9 years of that decade in the Star Wars quiet period. Values for those small headshots can range from a few hundred dollars to thousands of dollars if he referenced Star Wars or Anakin in his inscription. Most collectors settle for shots from the 1940's thru 1960's when he was regularly in films or on stage in Great Britain.

Hope that helps some.

Pete, I'm sure you've heard about the private collector who passed away several years back, I know a lot of his early stuff was bought up very quickly by collectors, thats where the insert posters came from. I've always heard he had a sit down signing with Shaw, having him sign photos and posters. I've never seen anything surface, but do you think its out there?

Way back in the early 90's before I had much of an exemplar file I saw a Jedi poster with a huge thick black marker Shaw signature on it. I haven't seen it since and can't speak to the authenticity of the piece. The person claimed it was something he paid $2000 for and that he wouldn't sell it for less than $5000.

That is the only SW related item I have ever seen that might have been signed by Shaw. Yes I have heard the rumors about Vader photos and posters and even Vader figures that have been signed by him, but with each story told, or person who claims that they have seen one.....no evidence has ever been produced.

Interesting piece!  I found this youtube video of Hamill on QVC from 92 last night.  Mom bought my brother and me a Hamill and Anthony Daniels plaque... thanks mom!

I spent 25 minutes typing answers on all the names you mentioned and the browser froze. Not gonna do it again.

Die hard fans see McCrindle as a non necessity even though he is a credited cast member with a great scene.

Curtis is available to most if they know where to look, again cool scene, but not credited.

Bush is the white whale for most collectors. Since Munroe and Hargreaves popped up in the last few years, every SW collectors wants a Bounty Hunter piece completed. Bush is the missing link. His appearances in Dr. Who, Hammer Horror and even a Kubrick film, along with being Dengar (a character SW fans love,) they all played with the figure as kids....even uncredited, he is in the top 5 sought after SW names.

McCrindle still demands about $1000, Curtis likely under $150, Bush is one of those names that the owner can name his price.....some SW fan will pay it.

Most people (way back when,) writing to Star Wars actors, worked strictly from the cast listed at the end of the film or from press kit info, and even then they usually mailed everything through the old Lucasfilm Fanclub. If the Fanclub did not have an address to forward to, the mail died there in Colorado. Remember Star Wars autograph collecting really didn't take off in the mainstream until 1997, when the internet was still relatively young. Sure there were a few fan sites here or there with addresses, but Mr. Bush's name wasn't even out there for public consumption until after he had passed. Unless you were someone who worked with him or knew him personally, you didn't even know to be looking for him.

A similar sad situation befell Larry Ward, while his name had been mentioned in interviews with Ben Burtt as the linguist who created Huttese and voiced Greedo in 1976 and Jabba in 1982, he never received a single piece of fanmail. Larry unfortunately shared a name with a character actor who passed in 1985. The two gentlemen's information was combined and misrepresented online for nearly 2 decades. I never gave up, but just about every other collector took the online info at face value, and never kept searching. By the time I realized what had happened Larry the linguist had actually passed, he died in 2007. I located his family, and K9 made contact. We found out that Larry had some troubles and never received any credit for is work, nor had he ever heard from a fan. By the time we contacted his family, Larry's belongings were long gone, and the only surviving sample of his signature was the guest registry book from his mom's wake and funeral service.

Lawrence Anderson Ward, "Larry," voice of Greedo & Jabba the Hutt (1944-2007) is one of very few Star Wars names that is a Rarity level 10 (unique, 1 sample of his autograph is known to exist)

One of the positives about the new films and the renewed interest in the franchise is that those folks who worked on the original films are now getting some of the recognition they deserve. I spoke to Peterson and Gawley at length at the last US Celebration and they both were very flattered by all the support they received from the fans stopping by, thanking them and asking for photos and autographs. They certainly deserve the credit, it is sad to hear about the ones who have passed before this could happen.