I was reading a newspaper in San Diego and saw the most beautiful picture in the world. No, it wasn’t a sunrise over the beautiful beaches in La Jolla. It wasn’t one of those double rainbows some freak out over. It was the handwritten lyrics to the great Beatles song She Said, She Said from the Revolver album. It included a few lines that didn’t make it into the song, and some words crossed out. All of it in John Lennon’s writing! That song, along with the lyrics to In My Life, Strawberry Fields Forever -- as well as letters from Lennon -- have never been seen in public. Now they will be. They were donated to the British Library as part of the “cultural gifts scheme.”

The Beatles biographer Hunter Davies, now 77, befriended the band in the ‘60s and gave the items over permanently under this system that allows people to donate items during their lifetime in exchange for a reduction in their tax liability. This reduces his tax by about half a million dollars.

They’re now on display at the treasures gallery, next to the Magna Carta and some works by Shakespeare and Beethoven.

Culture Minister Ed Vaizey said “It’s fantastic that the first treasures to be donated to the nation through the Cultural Gifts Scheme include the handwritten lyrics to some of the world’s best known songs, by one of the world’s most loved artists.”

Davies said he wanted the Beatles collection kept together in one place, and “…on public display, and the British Library is the perfect home for it.” In Beatles auction news, a guitar played by John Lennon and George Harrison sold for $408,000 at Julien’s Auctions recently.

It was custom made in the mid-60s by VOX that Harris supposedly played I Am The Walrus on. Lennon can be seen using it in the video Hello, Goodbye a bit later that same year (in 1967 – the Summer of Love, and year Sgt. Pepper was released). Nothing like authenticity proof in the form of a video.

Lennon supposedly gave the guitar to Alexis “Magic Alex” Mardas as a 25th birthday present. A plaque on the back reads: To Magic Alex/Alexi thank you/for been [sic] a friend/2-5-1967 John.”

The date refers to Mardas’ birthday, although it’s a shame that the same handwritten message on the back of the guitar would’ve made it much more valuable.

Mardas must’ve really enjoyed his 62nd birthday with the money he made selling it in 2004.

And with famous bands used equipment always being sought after, especially the biggest rock band ever, it will only go up in value. Especially when any other guitars that may crop up supposedly belonging to the Fab Four – will have a hard time being proven. 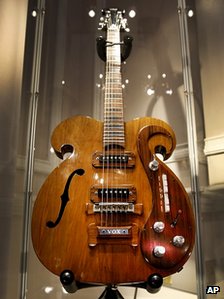 $408,000 for the guitar and lyrics valued at least as high. The prices always blow me away.