I got a phone call from a friend I’ve been going to movies with for 25 years. I met him when he managed a movie theatre and I was a teenager who had a buddy working for him. We started playing racquetball together and, upon realizing I loved movies, our conversations after games usually revolved around actors and films we liked. I hadn’t heard from him in a month, but he called and said, “An actor we both love died.”

When he told me it was Fred Willard, I was shocked. Even more so when he said, “Did you realize he was 86?”

I would’ve guessed 68. The guy has looked to be in his 50s forever. It’s kind of how Wilfred Brimley has looked like he was 86 his whole life.

I first saw Willard on the TV show “Fernwood 2 Night” in the ‘70s. At that time, it was Martin Mull who struck me as the funniest. Yet over the years, I just started to appreciate the way Willard would play the straight guy so well.

I won’t list all the great comedies he was in, but my favorite were the Christopher Guest “mockumentary” flicks. A playwright named Jonathan Rosenberg and I get together once a week and talk movies and plays. Just last month we talked about how Willard was the best part of A Mighty Wind (the Guest movie about a folk rock festival). He plays a former child actor who was on a show called “Wha’ Happened?” and he’d look at the camera and say that line when hijinx ensued. There was just something so hysterical about an adult, wanting to relive his glory days in the business.

And that wasn’t even his funniest performance in a Guest film. That would easily be Best in Show, where he plays an ex-athlete, that is clueless doing the color commentary for a big dog show. He says so many hysterical things, that it would be impossible to quote the funniest of the bunch.

Around 11 years ago, he came to the Fallbrook Film Festival (don’t look for it, it’s not there anymore). I did a brief interview with him. He couldn’t have been nicer. Not just to me, but the Fallbrook residents that all wanted photos or autographs from him. His wife (who passed away a few years ago), who he had been married to since 1968, kept trying to get him to leave near the end of the evening. Yet he stayed and kept answering questions from fans.

I had a movie poster from This is Spinal Tap, which I asked him to sign. That was the first movie he did with Guest, and his part is rather small. He’s a military officer, and he’s walking the band to the stage, and asking them to make their performance brief. He’s obviously not a fan of their heavy metal tunes, but does mention a band he loved that played a Holiday Inn in Kansas City called “Four Jacks and a Jill.” This after telling the band their long hair wouldn’t cut muster there.

I already had the poster signed by the band, and when he also saw my Spinal Tap shirt, we had a great conversation about the movie. 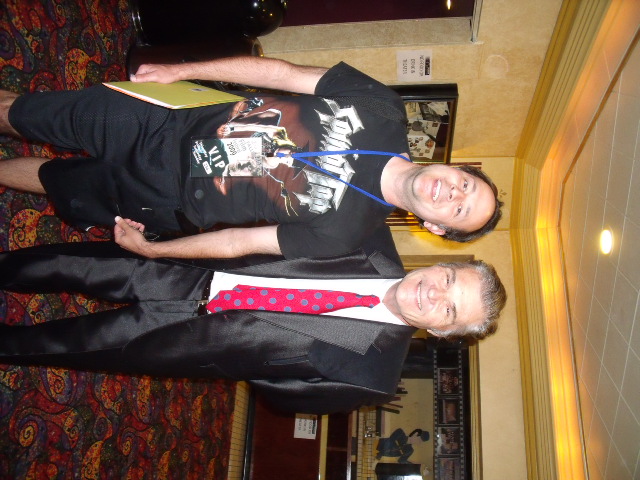 I had since gotten Ed Beagley, Jr. to sign the poster as well. He probably has the smallest part in the movie. He plays a nerdy drummer (one of the 28 drummers Spinal Tap had that died). There’s merely a clip of him playing.

My goal is to have the entire cast eventually sign that, but it will be tough, when Dana Carvey and Billy Crystal played mimes (and Crystal is really tough to get a signature from these days).

A few years after meeting Willard, he would make the news for being caught in an adult movie theatre doing lewd acts. Not sure why a 78-year-old married man would risk his career pulling a Pee Wee Herman. That stunt immediately got him fired from a PBS gig, but he kept his humor about it. He released a statement that “It was a lousy film, and the theatre would make a terrific racquetball court.”

He still continued to appear on all the late night shows doing bits. He often played a hapless character on The Tonight Show or Jimmy Kimmel. Most recently, he played a father on Modern Family. I didn’t see the episode where they had a funeral for his character.

I always hate when famous people die and everyone says “It happens in 3’s.”

I instead like to think, with comedy legend Jerry Stiller passing recently, he’s going to be up in heaven reunited with his wife, and with his co-stars Stiller and Abe Vigoda from their movie Chump Change and saying to them, with hands raised -- “Hey, wha’ happened?!”

I had no clue he died. I enjoyed his work. His part in Anchorman always sticks out to me.

I only saw Anchorman once in the theatres, and I remember him being the boss of the station (if memory serves)...but I couldn't remember if he had any funny lines in that or not. I'm sure he did.

Willard was great in Anchorman. The phone calls he kept getting about his son (who has a few issues) were some of the best parts of the film.