Sometimes film festivals are the perfect place to get autographs. If you know which actors will be there, you can bring something from one of their films. I’ll usually opt for a DVD sleeve. It’s easy to carry, and there’s something about an 8x10 that just screams “I’m selling this on eBay tomorrow.” The last film festival I went to a few months back, I got Heather Graham to sign my DVD sleeve for the hysterical movie “Swingers” (even though people barely remember she was in the Jon Favreau/Vince Vaughn classic). What bums me out most is that I have the DVD for “Boogie Nights,” which is one of my all-time favorite movies. It’s signed by a few of the cast members, but I can’t find it. It would’ve been nice to slap on the signature of the actress who played “Rollergirl.” But that’s the problem when you have when you pack your stuff everywhere and can’t find anything. I even thought about buying a rollerskate to have her sign, but my wife talked some sense into me, saying, “Do you really want to carry around a damn rollerskate the whole evening?”

Graham couldn’t have been nicer. She took photos with attendees, and I think I may be the only person that asked for her autograph. Everyone now is just so much more into selfies (which I don’t really care about). I talked to her briefly about some of the films of hers I loved, including the criminally underseen “Diggstown” (Bruce Dern, Lou Gossett, Jr, James Woods).

I had no desire to get actor Blake Jenner. He was great in “The Edge of Seventeen” and he was okay in “Everybody Wants Some” (although I disliked that overrated film). Yet at one point during the festival, I was talking to somebody, and he ended up being right behind me just standing there. So, I figured I’d have him sign my program. Actor/comedian Kumail Najiani was at the festival, but I didn’t bother him. I had already talked to him briefly at a festival earlier in the year. I highly recommend his terrific film “The Big Sick.”

The biggest name at the festival was Sir Patrick Stewart. I’m not the biggest Star Trek fan, but it seemed like I should get a DVD for him to sign. Since I did like the X-Men movies, I figured maybe I should get a DVD of one of those for him to sign. Nothing would’ve been nicer than having Professor X sign the thing. But in the past, I learned a hard lesson. If it’s not somebody you really, really love...don’t buy new product for them to sign. You end up wasting your money when you don’t see them, or they refuse to sign. Now, when I was going to meet Ray Davies, the singer and songwriter of The Kinks, I bought his new CD. It had come out a few weeks earlier. I figured...I can’t just show up with a few older albums I love, because again, he’ll think eBay. Yet if I had his new CD, with the albums, it would work. And...it did. He signed all my stuff, and we talked about his older songs. I even told him how my favorite ballad was “Waterloo Sunset” and asked if he’d do the song that night. He said they hadn’t rehearsed it, but he’d try. Guess what? He performed the song that night, and the next night in Los Angeles, when he didn’t...an LA Times writer lamented the fact that he did that song in San Diego but not there. Ha! Has an autograph collector ever wielded so much power? But I digress. This is about the actors at the film festival.

So, I decided against buying something with Patrick Stewart, mostly because I realized I had the DVD for the movie “Ted” (That’s the film with the teddy bear that talks, starring Mark Wahlberg, writtten/voiced by Seth MacFarlane). Since Stewart does the opening and closing narration...I figured I’d have him sign that. 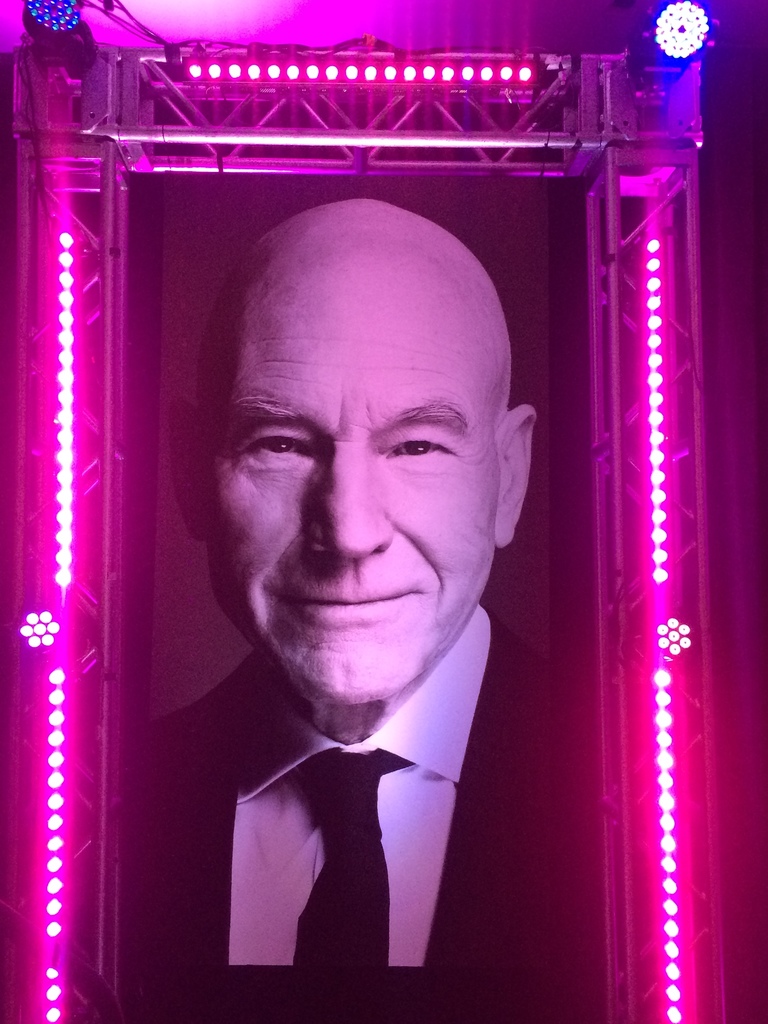 My wife, who doesn’t care about autographs, was thrilled by the concept of getting a business card of hers signed by Stewart. She named her business after a quote from Stewart and was looking forward to telling him the story.

Well, after he gave this amazing speech and talked about his acting influences, and had the crowd in the palm of his hand, he went back to his seat. We obviously didn’t want to bother him there. So immediately after the festival ended and people were shuffling out, we went over to him. There were about four security people walking with. As a few people shouted his name, he just kept his head down. He didn’t even make eye contact or say hello. My wife got close and started to tell him the story about how she came up with the name for her business. She was promptly pushed back and told not to bother Mr. Stewart. He was quickly escorted out a back door. My wife was shocked, and then furious. I said to her, “Welcome to the often frustrating world of autograph collecting.”

Jealous of the Ray Davies!  I hope he comes to Cleveland.  Waterloo Sunset is one of my favorites as well, ironically I teach at Waterloo High School.  If I get to see a performer before a show, I ask about them playing a particular song- you never know, they may just throw it in the set!!  Nice work.

Ray is so great, but you should be warned. For the last 15 years, Dave Davies (brother and guitarist in Kinks) is a HORRIBLE signer, and it's because of his wife (I can't disclose how I know that information, but it's a friend that knows her and won't let him sign). I finally got him...after I followed, walking behind him, and telling him what a fan I was...pointing out the Kinks shirt I was wearing. His wife was yelling at me, and him, insisting he not sign. He finally just sighed and signed for me (although he didn't for the other two guys there).

Another Ray Davies story -- I was dating a woman whose company flew us out to New Orleans for a party and big football game. At half time of the football game, we left and were walking around the Bourbon Street area. There was gun fire. I thought it was a bus backfiring or something. Nope. Ray Davies GOT SHOT!!!! Some dude stole his girlfriends purse and started running. He ran after the guy and the dude turns around and shoots him. I was shocked. And...pissed that I didn't know he was around the corner from me!!! (although I wouldn't have had anything for him to sign)

that is to bad about Patrick stewart! I have some video covers that I had him sign ttm a few years back when he was doing a play!

The bad thing Robert is...my wife NEVER wants autographs. And she wanted his!!!!

Patrick is getting older and he is a regular convention signer, where he charges a pretty penny. He isn't that great inperson at events or on the streets.

I must agree 100%, Diggstown is a great film, and whenever it comes up, people have never heard of it.

Looney Tunes here in New York did a Dave Davies appearance and it was great - played a few songs, did an on-stage interview with a local DJ, signed everything you had if you bought the current CD and they had a pro photographer take a shot with each person and loaded it all to their website so you could just grab the photo there later. It was a great experience - sorry yours was so lousy.

Dang it! Well, hopefully he does that to promote his CD in other cities. I heard his health wasn't so good these days.