I understand this is a sloppy bunch of signatures but remember hearing that early Beatles sigs were fairly sloppy. What does everyone think??? Permalink Reply by Steve Cyrkin, Admin on July 18, 2011 at 6:55pm
My vote is no, but I'm interested in hearing what those who really know the Beatles think.

Permalink Reply by Steve Cyrkin, Admin on July 18, 2011 at 8:36pm
You may well be right. If it's good it was really done on the fly. There are things in each signature that concern me, but I wouldn't be surprised if it was good.

Dont`t know where you found this autograph..... but I just spotted this:

Permalink Reply by Tony Lando on July 20, 2011 at 6:58pm
the Lennon and Harrison are really not typical.  and there are things in the Ringo and McC that are questionable.

I'm with you, Tony. the R of Ringo is really atypical, isn't it? It looks closer to a later P in Paul. The a in Paul, the stretch in John, the irregularity in the e of Lennon, the look of uniform pressure on all signatures. These are things that concern me. Yet I think that if they signed it on notebook or other flat surface in a rush, they could be good. Let's face it...the John stretch is long for what would be an otherwise decent set of forgeries.

Scott picked a great set to talk about. This discussion deserves more action than it's getting.

Yes I agree Steve. This is a very interesting set to discuss... Hope it will get some interest from the Beatles-experts in here...

Here`s a comparison with some other genuine Beatles autographs from my archive (Tracks)... I`m no expert but before I purchased my own set of Beatles autographs I spent about 4-5 months getting into their style of writing..and they varies alot.. a specially John`s signature changed alot in the years.. The irregularity in Johns` "e" was very typical for his autographs signed in mid 63... It became more polished later as you can see from the examples from 64(right ,top) and 65 (right bottom).. 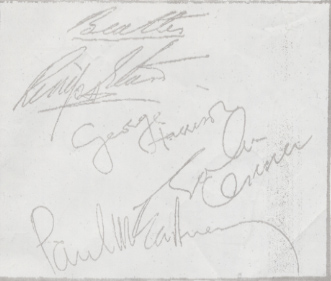 This is a great discussion.  Let's educate the collector.  Do these look familliar?  Here's a hint, these two sets are 100% authentic. 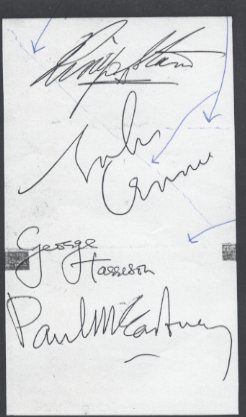 The arrows do not mean a thing, they are just on the copy to show damage

love this discussion. I have been studying Beatles autographs religiously for over ten years.  have collected probably 50 examples of authentic sets from viable sites such as Tracks, over the years. I will attempt to put some up.

I also have some of my own, but I'm afraid you folks will destroy them!  LOL  I have a set of all 4 on an album page from 1965, that were signed while they were filming HELP.  I also have an album signed by Paul, Linda and denny Laine.  And a solo Mccartney on a color beatles photo, that I have been questioning for years.  keep the comments coming!

Permalink Reply by Scott Bentley on July 21, 2011 at 11:11am
This has been a great learning experience. Glad to provide everyone with an interesting topic of discussion.

I have been looking at these signatures, and reviewing my examples, name by name and its baffling to me.  The Mccartney is very consistent, as is the Ringo.  the Harrison, the more I look at it, is consistent with a period in 1965 where he was transitioning to his later style, more flamboyant. But the slant still bothers me.

The one that baffles me is the Lennon.  I know he did some whacky things with his signature, and the little "hiccup" with the was actually fairly common. And I have seen variable spacing between the "N's" in lennon. But have never seen a space between the "o" and "h" like this one.