I believe I have identified the "tell" in Charlton Heston secretarial signatures, and if I am correct, the news is not good for most collectors. It appears that most  Heston signed photos are secretarially signed.

Here is a synopsis:

The Theory
Photographs and other memorabilia sent to Mr. Heston's office were signed by a secretary. However, Mr. Heston did authentically sign books through-the-mail.

Real vs. Secretary
In authentic signatures, the R in "Charlton" is distinctly a lowercase "r" and less than half the height of the L. The first four letters are clearly "Char."

In secretarial signatures, the R looks much more like a lowercase "l" and is about the same height as the L. So, the first four letters appear to be "Chall."

I have attached two images to give you a small sampling.

For more details and images, please visit my blog at the link below.

I'd love to hear your feedback and thoughts on this. I fully anticipate some resistance to the theory, because denial is always the first step. In fact, I would love to be proved wrong, because that would mean I wasn't sitting on a bunch of secretary signed photos!

By way of introduction, I have been collecting since the early 90s and I am the UACC Ethics Director.

I look forward to the discussion.

Permalink Reply by Steve Zarelli on March 6, 2011 at 2:13pm
In my research I found dozens and dozens of examples of what I believe to be secretarial signatures that were authenticated by all the legitimate 3rd party authenticators. I believe they all got it wrong. Everyone bought into the idea that he was authentically signing through the mail.

These are the signatures from three book Charlton Heston signed in front of Larry Grobel when he went to Heston's home to interview him in 2002. None of these have the characteristics of the suspected secretarials. 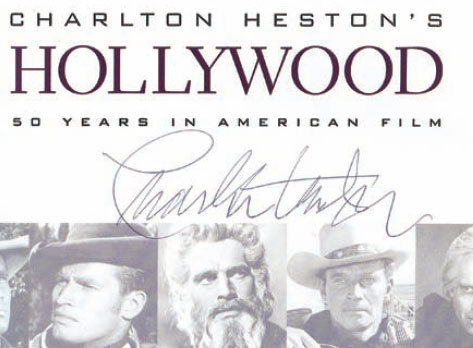 Permalink Reply by Steve Cyrkin, Admin on March 9, 2011 at 4:31pm
Louie correctly pointed out that the signed photo in the article looked like a secretarial. It's the one I uploaded earlier from Starbrite's inventory.

Fair enough. Here's a picture of Larry Grobel and Charlton Heston at Heston's home in 2002, on the day the books were signed: Permalink Reply by Steve Cyrkin, Admin on March 7, 2011 at 9:23am
I did a search on eBay (charlton heston autograph) and all of the Hestons offered with PSA/DNAs authentication showed the old certificate cards, like the one you show in your article, Steve. When did they move to the new cert card? Have you found ones you think are secretarials with the new cards? Have you found any authenticated by them in the last year or so? Curious to find if they found out.

I am not familiar enough with PSA/DNA to know the difference between old and new COAs. Most appeared as the small certificates, but I believe I found some suspected secretarials in the "Letter of Authenticity" format as well.

Here is one that I think is a secretarial.  What do you folks think? not the typically chall secretarial.  what makes you think it is secretarial?

In my opinion, this is not secretarial. And my opinion is not based solely on the R vs L. The secretary had an arrow straight baseline. The real Char dropped off on the "ton" as this one does.

Oh, this is the autograph you guys are talking about. It can be so hard to follow these threads sometimes. The above Heston is authentic. It's from a private signing he did in the 1990's.

Right. This and Alaska pose came from the same session.