This looks OK to me but I'd welcome other views: 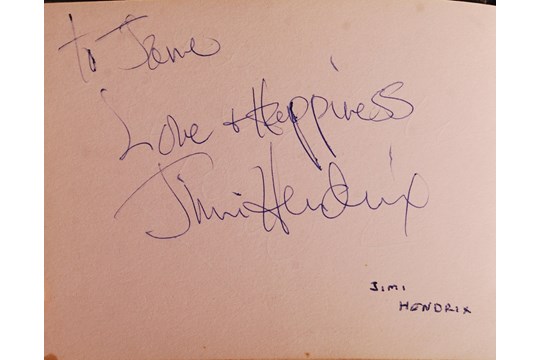 It looks very good to me.

Looks good to me too,

I think you got two hendrix signatures in the book the other was pretty sloppy though ,these Walker brothers tour signatures are a real anomoly as one sold at RR a while back for a lot of money i think around $17000 i watched it sell and couldnt for the life of me work out why, it was nothing special was dedicated and was pretty much the same as this one no better no worse it also had other signatures from the package tour ie walker bros and Engelburt signatures ,theres one on RR now from the same tour with the other signatures and this one will likely end up on RR aswell as a certain UK dealer likes to buy them up and flip them with the Walker and Engelburt signatures that came with it, the dealers seem to think because one sold big the others will but im not sure i think they are chasing a price that was a real one off lets see i certainly wouldnt pay an extra $10000 because it comes with a set of Walker brothers and Engelburt signatures that you can pick up for $50 on their own but you can never tell what makes one item go for big bucks and a similar item not

What do you think Roger Wright of the signed Jimi Hendrix photo on the Tracks uk site? That autograph book was sold for 4500£ + 22% of buyer premium...

£5500 was i suppose a fair price 2 hendrix sets and £500 worth of other signatures ,i quite like the signed photo but its pricey and signed on the back doesnt display well id save the 2 grand and buy a standard signature

Hendrix seems to sell better in the states!

Thats more than likely where these will end up

Roger wright but also the original photo have a value... no!? This signed photo have also a good story...