JSA and PSA - what has happened?

First let me say , I have always been a proponent of 3rd party independent authentication, because I believe it curtails the forgery industry.  And I still believe that.

However I have always had mixed feelings about the competency of these 3rd party authentication services.  And sometimes their questionable competence is enough to drive me to Rant, on internet autograph forums…  Here’s why:

1. It is a sloppy highly subjective process more than any other collecting genre.
2. After all these years, STILL No standards that the public is aware of, which 1. above is a product of.
3. Most Authenticators have no documented governing credentials.
4.There’s a “good ole boy” network of players that influence (often negatively) the autograph collecting industry.    For example, the same autograph can fail from one source but Pass from a “network member” source.     Just look at the examples below of PSA and JSA certified JFK signatures and note that some are a dead match to the one I sent JSA, that they could NOT authenticate.   But, PSA ad JSA seem to authenticate countless cryptic very similar JFK signatures for autograph auction houses that offer high volumes of business for PSA and JSA.

A couple months ago I acquired a JFK Signed campaign insert (see below).   I thoroughly researched it with Hamilton’s “JFK Robot” book, JFK Presidential appointments and letters, and PSA and JSA certified IN-person style signatures of that era (1960).  And found Several highly consistent matches to the one below I sent to JSA.     After about 4 weeks JSA returned mine with one of the “we can’t opin” letters and a credit of my $150 to use on future authentications.      Not sure I’ll ever have to use it as my confidence with PSA and JSA has dwindled over the years.  If you cant opin after 4 weeks with my JFK  how can I expect you to authenticate other signatures?

One of the reasons I option for JSA over PSA is at least they will Opt out . Whereas my experience with PSA has been if they don’t know , they’ll just fail it and cash your check.    But, that’s another story.

These repeating experiences with PSA and JSA has been the #1 reason I have gradually lost interest in autographs.     I won’t use the word ”shady” but it is a highly flawed collecting genre with no reliable resource of "experts" to consult, far more vulnerable than any other genre I have experienced.  And being born with Collecting ADD, Ive collected about everything over the past 35 years..

So today after getting Another “Cannot Opin” from JSA, I am truly dispirited with autograph collecting and selling.

And dont get me started on these self proclaimed "best in the business" chest thumpers... ,.... I'd just ask, based on what data or examination credentials ??

I guess I could always send this JFK Signed item into one of the auctions houses or dealers who have closer "relationship"  with JSA or PSA and get an immediate letter of authenticity. 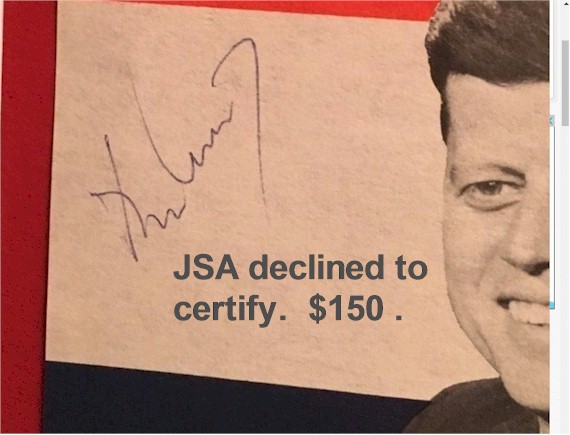 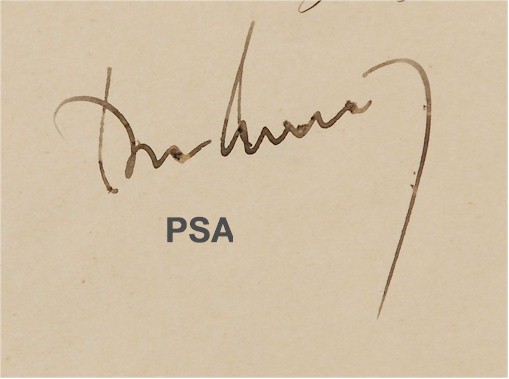 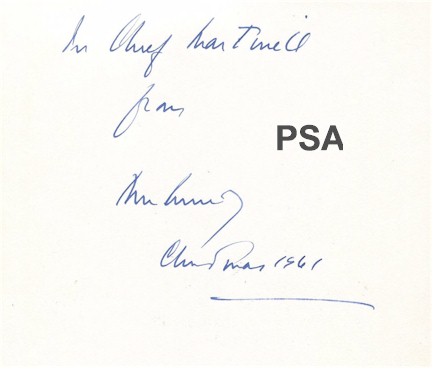 I have never submitted anything, and never will. The very word is offensive. And, I enjoy the "work" - (aka collecting).

Permalink Reply by James on August 25, 2017 at 11:15pm
Kevin, the JFK that you sent to JSA, for which they declined to opine, is in fact authentic...as you know. This should not have been so difficult for them to determine. And I agree with you that if this had been submitted by an entity that does a lot of business with JSA, JSA would have passed it.

Your concern is a concern that I would imagine many of us have. I have several autographs that have not yet been authenticated, but they are all without question authentic. However, I am concerned that because I am just a small-time player, that I might have trouble getting some of them authenticated and thus lose a lot of money.

Autograph authentication could be significantly more accurate. It wouldn't be hard.

+1 Many times. And it need not require this high "tuition" or whatever folks call getting screwed until they catch on (those that stay and don't give up or melt down). I just wish more folks, more collectors, would ask questions before buying. All too many times we hear "I have purchased this and now have concerns..." One can learn by selecting items, not buying first(the most common problem easily for most), just posting here at your most superb site and asking questions...there are threads here about what constitutes quality, authenticity concerns and terms, dealers and more.

I think perhaps the search engine here could be utilized more in some way..."One thing to do: Before you buy, run the sellers name through..." Science, yes, Rocket science? No, needn't be. If there are a few problems, just move on.

Recently I have sent my Lennon to PSA- that was the first time I ever used them. Yeasterday I saw at their site that the autograph is "questionable". I beleive that they didn't know if it  was authentic or not, but still charged $150 for authentication. By the way, this Lennon has been checked online by Roger Epperson earlier and he called it authentic...

Permalink Reply by Paul on August 26, 2017 at 1:25am
You see the failures with partnerships and their experiences with autographs.

Sure. It's on the french card, signed likely in January- February in 1964 during their tour to France. It's a part of two postcards set, the second is signed by MacCartney. Both also signed by Paul on front, but on front the autographs are very fading.