I'm a bookseller who popped on here once a few years back with another Mantle signature that you all thankfully helped me pin down, and now I'm back with another, though this time with a weird side-observation.

Here is a photo from our copy of The Mickey Mantle Story, with an additional signature by Johnny Wise. The Mantle signature looks pretty good to me compared to others from that period. Our store's former owner got it at a local auction years ago, but didn't remember any provenance beyond that. But as I started looking at past sales I noticed of the first five signed copies of the book I found, three were signed either to Donald or Don, with much the same handwriting for the dedication but with a different style signature. There were also two without dedications, with "Best wishes" in the same style as the others, but with the same earlier-style signature as the one I have. Here's a collage of the ones I found and where/when they sold, with one from an authentication query posted here a few years ago: 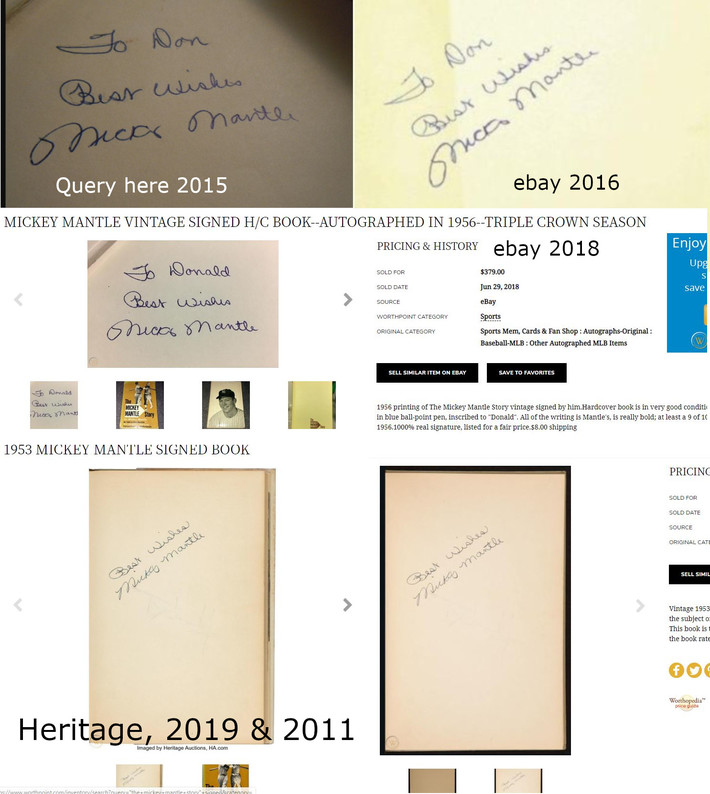 If I'd just seen the two (possibly same) copies via Heritage at bottom I'd feel all right, but the different style signature in the top three and all being signed, with mine being yet a fourth, to either Don or Donald seems really strange. I know he's heavily forged, so wondered if there was any known history of some forger out there who felt he could do a believable "Donald" in Mantle's hand and just stuck with it? If anyone's noticed this before or has any thoughts, I'd appreciate hearing them.

Not positive on the Mantle, but the other signature is Johnny Mize, not Wise.

Ah yeah, thanks. My brain had it right but my fingers went wrong anyway.