Supposedly signed in Germany in 1971.

I´m not an expert but I sure do have a pretty good feeling about these signatures.

What do you guys think? 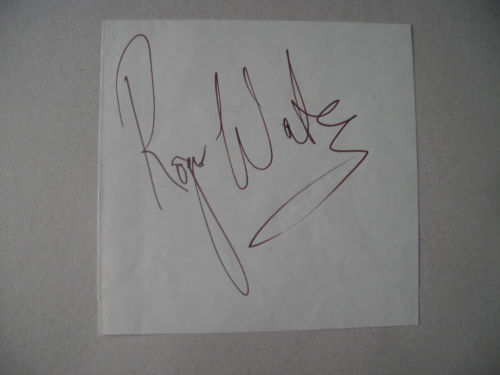 I do not think they are genuine.

do you have sigs from that era in your collection to compare with?

No I don't. It's just my gut feeling that tells me that they are not  genuine.

i don't think these are genuine. The signatures are not the way Floyd signed in 1971

I would like to see some examples from that era to compare them to.

All I have is this 1968 signed album from the R&R auction in September 2010...and I think these signatures match pretty well. the Gilmour and Mason are way out I would say compared to the 68 example.

The only signature I would agree on is the Waters signature.

In my opinion the Masons are VERY alike...apart from the tail end of the signature.

But hey, I guess we have to agree to disagree :)

Your input is appreciated. I hope someone can provide some other late 60´s/early70´s signatures that lead us in the right direction.

It appears that Nick only used the swirl at the end of his signature when he signed first name only.

That might be a pattern for the few sets shown here, but in the 2nd set Ted has postetd he didn´t use the swirl in his first name only signature at all.

The former owner of the autographs said he did a 20 minute interview with the band after a show in Germany. So imo the autographs weren´t rushed...may be Nick gave him a very nice sig with a swirl after his last name, because they gave the autographs in a relaxed atmosphere?!

Plus the Nick signature is on the backside of the Rick & David signature. Would a forger actually do this?

I found two other sets from the 67/68 era, I believe. The sets are from past R&R auctions.

One interesting fact is the tail in the Mason sigs. This seems to be a not so uncommon way he used to sign his name. 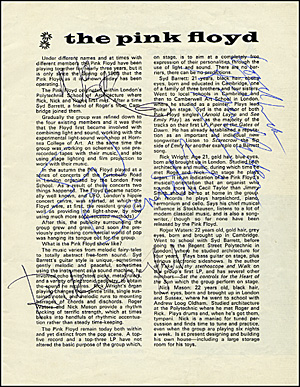 Here are two that I bought with signatures from the 60's: 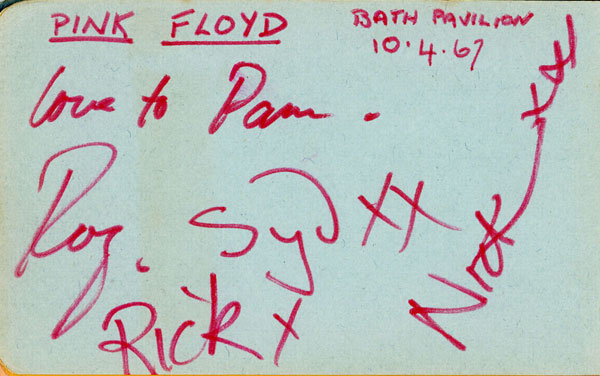 I do not know the first thing about Pink Floyd signatures.

To my untrained eye, these all appear to have been signed by the same hand. Same flow and pressure.