When I go to concerts I always look to see what signed items the artist may have at their merchandise booth.  Knowing in advance would be helpful and also may persuade me to attend a show.  I created this thread for people to share what I signed items were available a live shows.

and if you get They Might Be Giants in person, one of those guys NEVER signs. It's weird. so merch items are your best bet with them.

wich one doesnt sign i used to work with one in the 80s when he wasnt touring when the band first started out . they were very wierd people

Newbury still has a TMBG CD with a signed postcard for sale:

Picked this vinyl up from the Toadies concert I recently went to. They played the album in full. 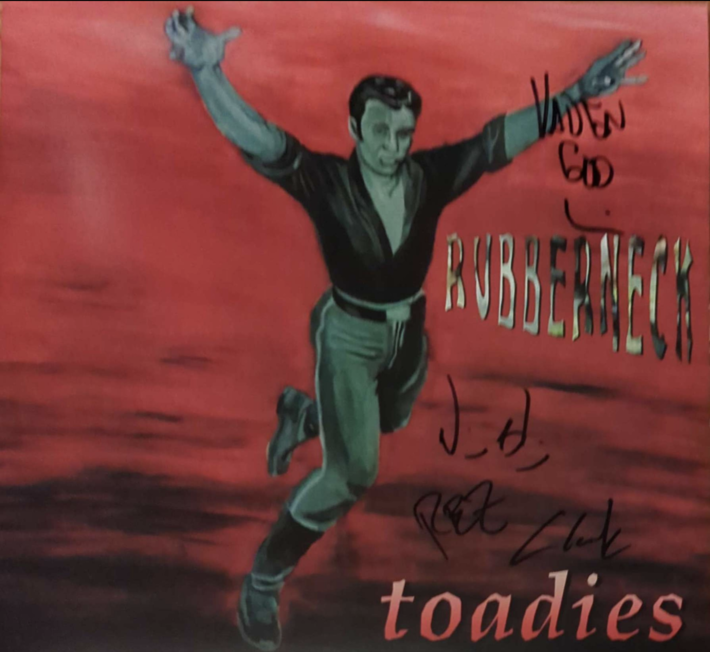 +1 on the PSB - their print is printed on a nice stock card and beautifully designed for their tour. Had a run of 200 or so for the entire tour.

Guns n Roses, Air Supply, Westlife, Backstreet Boys are all coming to town for me - any ideas on whether there are signed merch, especially for GnR? Not optimistic but still would like to know. Tour organiser was useless in providing information.

I have seen GNR many times and I have never seen any signed merch from them for certain.

However, I will contribute, here are some that I have seen signed items from:

Judas Priest (signed Litho for $100 on their current tour)

Buddy Guy (LP, CD, Guitar Strap) as someone else has also mentioned

That is all I can think of off the top of my head.  I go to a lot of shows as well so if I think of any more, I will do another post.  Generally speaking, smaller venues tend to have a better chance of signed merch in my experience.  And with some musicians that also varies from tour to tour.  Death Angel, for example, didn't have anything the first time I saw them but did this last time I saw them.

Music autographs are kind of an after thought with me, but I managed some things over the years in Person.  Steve Morse / Dixie Dregs a couple times. The Fixx multiples. Al Di Meola a few. Eric Johnson, Joe Satriani, Steve Vai, Dada, Mike Doughty (after Soul Coughing), Tommy Chong. Kirk and Chris Curtwood (Meat Puppets) Yellow Vinyl Up On the Sun.

Mammoth WVH is touring with Alter Bridge as support, but he did not have any signed items unfortunately.

Alter Bridge did have signed vinyl at reasonable prices ($40 or $50) and drumheads.

The last shows I saw with signed items:

George Thorogood ($25 CDs, which is great, since he DOES NOT sign in person)

Marilyn Manson (who won't tour for awhile, because, well...you know) -- the crappiest item ever. a Xerox on a piece of paper, of an 8x10 photo, in black and white and bad paper stock -- $50 (and he just initials MM), and they only have 10 at each show, so they sell it as a "very limited edition item"

Eddie Vedder - 10 signed lithos per show (on European solo tour, not in the US as far as I know), for charity priced @ €250 and sold out within 1 minute