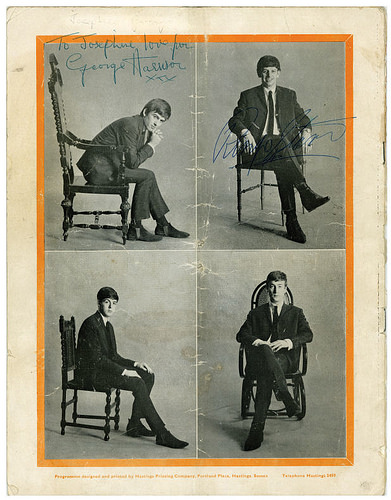 The 10th of March 1963 was the second date of The Beatles' UK tour with Tommy Roe and Chris Montez and took them to the Hippodrome Theatre in Birmingham.

Although The Beatles hadn't been placed on the top of the bill prior to the tour, the audience reaction after the first night in London ensured that the group closed the show on this and all subsequent tour dates.

The Beatles performed a six-song setlist throughout this tour: Love Me Do, Misery, A Taste Of Honey, Do You Want To Know A Secret, Please Please Me and I Saw Her Standing There.

a happy surprise, this was also signed on the inside by Chris Montez! Comment by Adam Halloran on March 18, 2017 at 8:53am
I just got the Tracks loa in the mail along with the original letter from the lady who obtained them and it was really amazing to read her experience of talking to The Beatles. Apparently Paul had also signed the programme too, but has faded off. I believe I can still see pen indentations on the reverse side of his image where he signed. That is super cool to me that it was touched by the the three of them!

Comment by Adam Halloran on March 18, 2017 at 5:55pm
Thank you very much Bjorn and Ian, that means a lot coming from you both. I love the history to these pieces, so finally getting the letter from Tracks and reading the original owners experience thrills me mote than maybe it should! Haha.

And you are young enough that it should be a good investment over time !

It is a very cool piece, Adam. Congrats!