C'mon now, we all have a story where we blew it. I'll start:Roy Orbison - during Springsteen's "Tunnel Of Love" performance at the L.A. sports arena in 1988. R.O. was walking in the bathroom (ALL BY…Continue

Most Difficult Band/Musician to obtain an in person signature

By far, in my opinion, it is the current line up of the EAGLES. Long gone are the days of the 1980's when these guys though still very moody, and difficult, at least signed something. Don Henley even…Continue

What kind of member are you? (Check as many as apply.)
Collector

What would you like to tell us about yourself, your collecting, or business.
www.rockandrollcollection.com
www.therisingcollection.com
www.jawsfan.com
Probably the only collection on the internet by a fan that has no affiliation with anyone in the entertainment industry. I am a fans, fan.

What are your areas of interest?
Music

Why do you collect?
Rock and Roll music has all the answers. No matter what, someone has written a song and sung about it. I am infactuated and love R&R music and the mood that it takes me too. Collecting, is my way of being part of that feeling that music takes me. Plus, I enjoy the thrill of a celebrity encounter and the thrill of having memorabilia as a hobbey. ~~~~My email addy is rockndroll@sbcglobal.net.

What is your favorite autograph in your collection?
Framed signatures of Robert Plant and Jimmy Page both autographed on 6/29/1990 in Knebworth, England.

You can ask anyone living or dead for their autograph. Who would it be?
John Lennon; Errol Flynn; Brian Jones and/or Syd Barret.

Cory Wells of Three Dog Night: Thank you for your music, but not for the autographs. With the passing on October 20th, 2015, of the very talented and beautiful voice of Cory Wells, the co-lead singer and 1/3rd of Three Dog Night's amazing trio of shared vocals, Pop Music and Rock and Roll lost yet another of its pioneers and hit makers of the 1960's and 1970's.

Autographs: Why Just Collecting "One" Is Never Enough

There are two questions I have been asked more than any other in my 30 years of collecting:

The first is, "what do you plan on doing with your collection" and the second is, "why do you need so many signatures from the same artists"?  I'll explore this second question as to how it relates to my collection with respect to "racking" or "hoarding" or whatever name its given when a collector obtains or builds a mountain of multiple signatures from a…

Why I will never again support or pay a penny to see Three Dog Night in concert.

About 4 years ago I had obtained Chuck Negron’s signature on an 8X10 B&W photograph from a celebrity autograph convention he attended. Thee Chuck Negron being the original 3rd member so many years ago that was at the time, all three of Three Dog Night.… 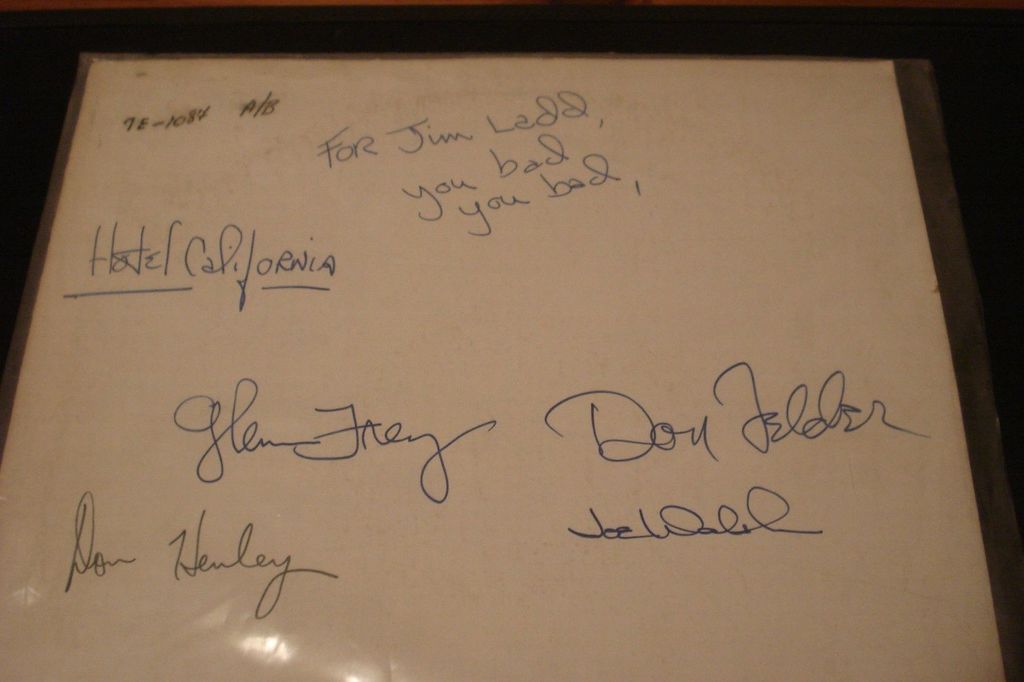 Hello Stephen,  Do you know who wrote the inscription and the words "Hotel California?"   Possibly Glen?  Thank you.

Jaws is playing this Wednesday at South Coast Village Theatre by So. Coast Plaza!

Matthew said…
Stephen,
I was told your the Eagles expert. What's your thoughts on this guitar? Thankd for any feed back

I would like to know if are selling some SPs, I already sent you several emails but I didn't got any answer...

hi stephen..can you give me your views on queen signed LP

has coa and hologram..dated 2007..cheers

Daniel said…
Hi Stephen. I thought so. I already had bought a fake Freddie Mercury Autographed photo, and do not want to do the same mistake. For your info, another item from this guy has been sold on ebay last week...and again it was dedicated to you...hmmm you seem to be a very famous person :) Joking apart, thank you for your reply.

Daniel said…
Stephen, recently there was an autograph of Freddie Mercury with a dedication To Stephen. Can you contact me on my email: daniel.grima@aom.com.mt
as I need to speak to you to check authenticity of item.
Thanks
Daniel
Malta

Stacy Saldana said…
Thanks for adding me! I really enjoyed looking at your site and all your items!!