Collecting signed musical instruments goes beyond the obvious guitars, harmonicas, and pianos. Signed drumheads, drumsticks, cymbals and other instrument related equipment. Guitars are by far the most popularly collected of the instruments. An important place to start when appraising guitars is to determine their intrinsic value. Most signed guitars have never been owned or played by the artists who sign them. Instruments that have been personally owned and played by an artist are the most desirable. The more recognizable and heavily used, the more value the guitar will have. Instruments used on stage and/or in recording sessions during the height of an artist's career have the most value, and as previously mentioned, photographs remain a key element. It is important to determine if the item was owned and used by the artist or just signed, as this greatly affects the value.

I was presented with the opportunity many years ago to purchase this Nirvana Zildjian 18” K Dark Crash Cymbal. It was signed by all 3 members of Nirvana with inscriptions. 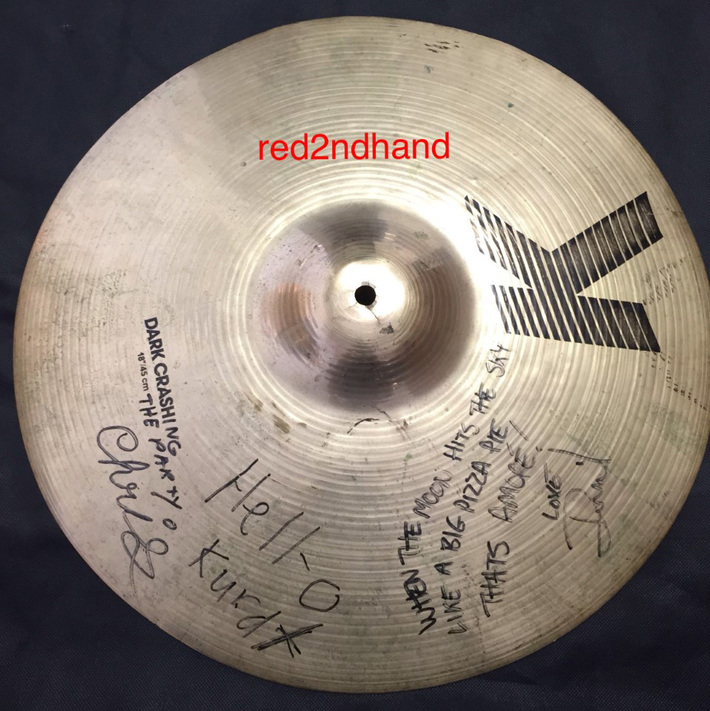 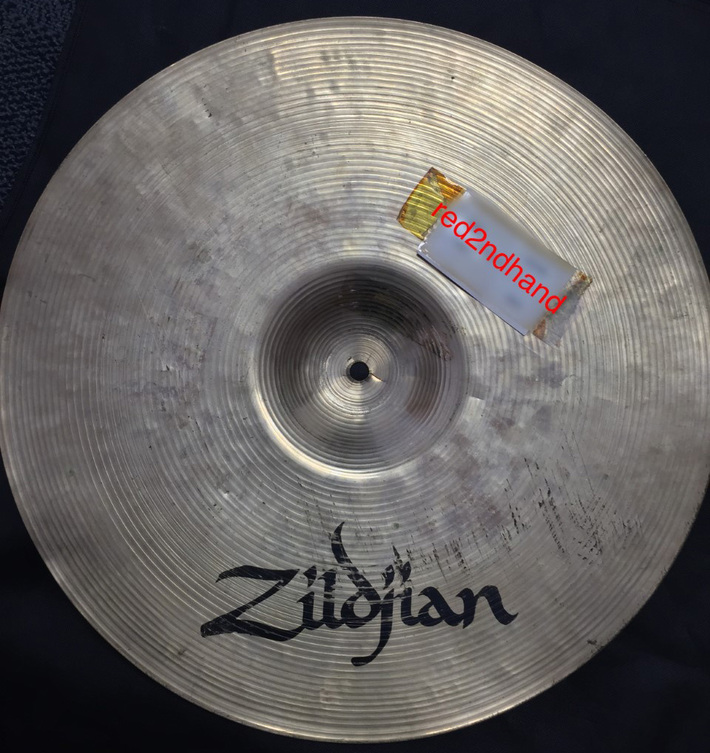 Chris Novoselic signed Chris with the inscription “CRASHING THE PARTY “ 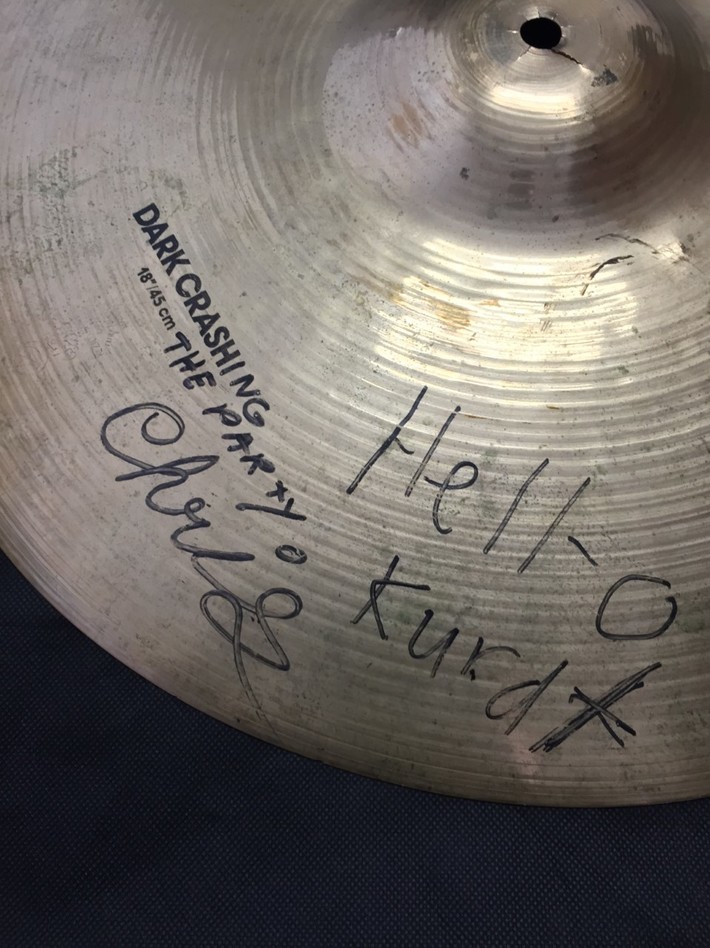 Dave Grohl signed David with the inscription from the lyric verse of the songThat’s Amore. The autographs and inscription writings all looks authentic upon close inspection. As I am not familiar with Zildjian Cymbals, I have to establish how old this Zildjian 18” Dark Crash cymbal was and when it was made. From research, this Zildjian IAK (Intermediate American K) 18” Dark Crash cymbal was made between 1988-1993. I was able to contact a Zildjian Cymbals Expert Steve Blacks in New Zealand to confirm it. 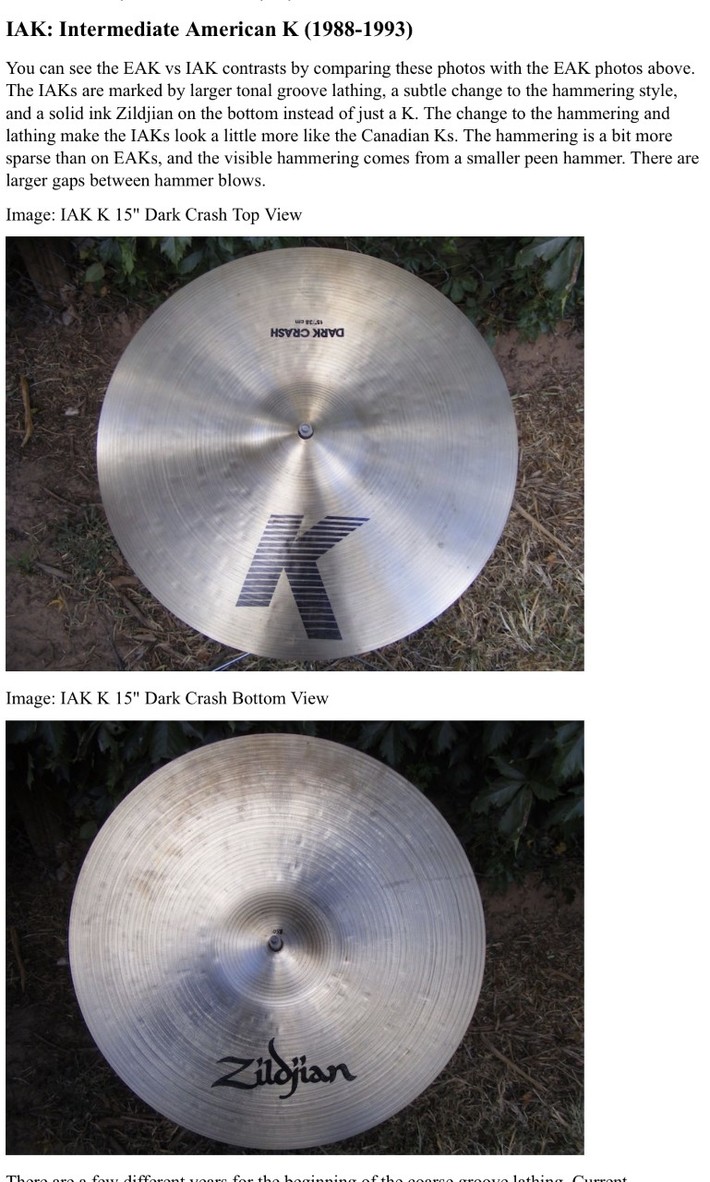 On further research on the autographs. I was able to narrow down to when this cymbal was signed. About late 1991 during the release  of Nirvana Nevermind album.

I did ended up buying this Nirvana Signed Cymbal after all my research pointed to it being authentic.

My next project on this Nirvana Signed Cymbal was to establish exactly when and where was this cymbal signed and whether this was Dave Grohl used cymbal. 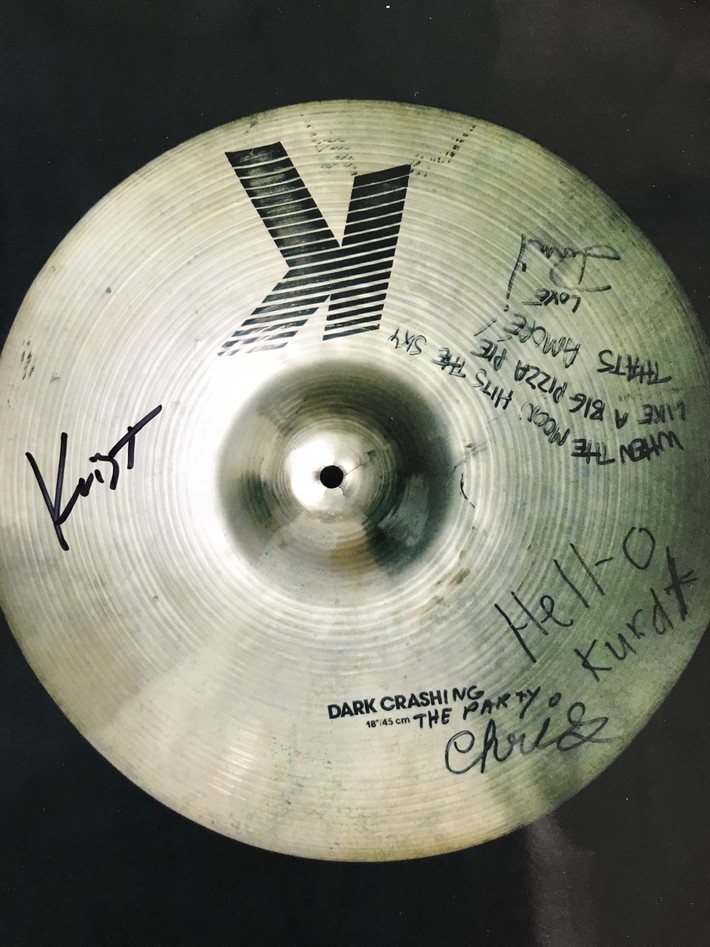 A breakthrough came when a Nirvana fan whom I known told me that Dave Grohl was playing a Zildjian K Cymbal on the Beehive Records Gig video that is on YouTube. Viola!!! Dave Grohl clearly was playing a Zildjian K Cymbal at the Beehive Records gig which was the listening party for the release of Nirvana “Nevermind” album on September 16, 1991. But I still have to establish that this signed cymbal was Dave Grohl's cymbal. 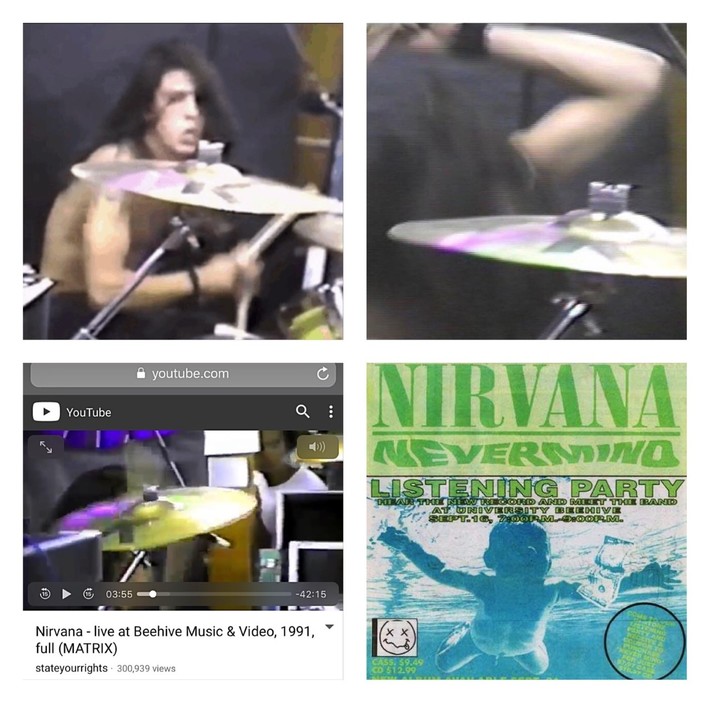 On June 28, 2015 60 Minutes aired an episode of Anderson Cooper sit down with Dave Grohl of Foo Fighters interview. Dave Grohl home drum setup has a Zildjian K Cymbal. It gave me some glimmer of hope !!!! ;) 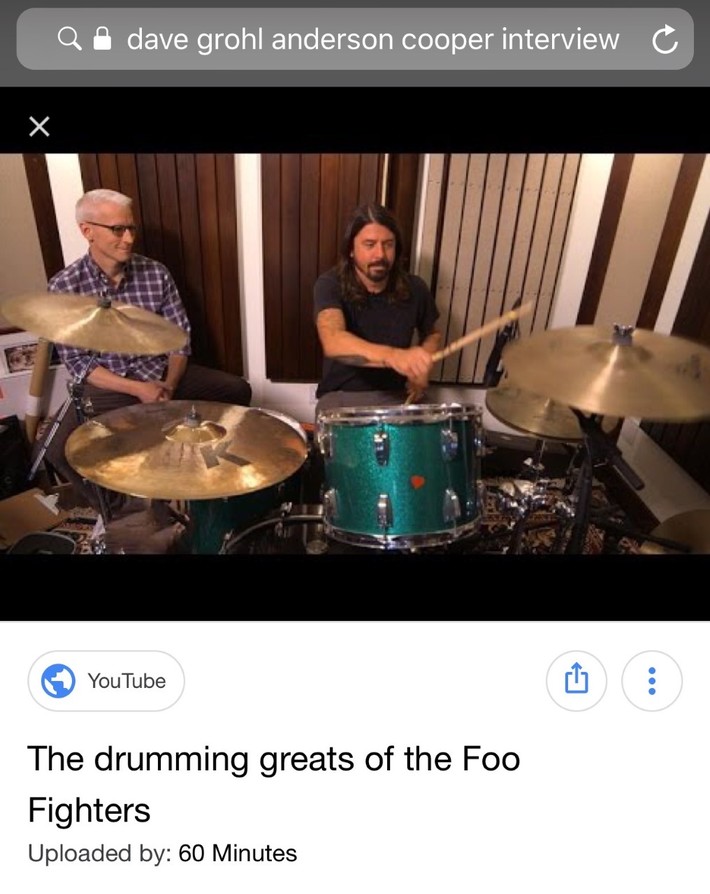 Recently I contacted Barrett Jones who was Nirvana Drum Technician. He has a recording studio in Seattle now called Laundry Room Studio. He is a mixing engineer, producer & musician.  I sent him an email that I was researching to see whether this Nirvana signed cymbal was Dave Grohl used cymbal. I told him that I know from reading his article that Dave Grohl only uses Zildjian A Series Cymbals during Nirvana era.

Barrett initial reply was: “It’s possible that Dave had a K Dark Crash at that time, but I don’t recalled specifically. Is the cymbal broken? Where did you get it? Cymbals did not last long for him. After Nevermind came out Dave got endorsed by Zildjian and we went with all “A” series.

I replied to him that the cymbal was cracked in the middle of the cymbal. I told him that this cymbal was probably signed in late 1991 around the release of Nevermind album. I asked him whether he can ask Dave Grohl about it. Barrett reply: “I would say almost 100% that this was Dave’s. I just showed him the pic and he said it “must have been.” I think I remember this one as well.”

I wrote back telling Barrett that I always thought that this signed Zildjian 18” K Dark Crash Cymbal is the same one Dave Grohl played at the Beehive Records gig on 09/16/91. I said that it is a stretch, but I asked whether he remember where and when it was signed. I attached a few screenshot pictures of the Zildjian K cymbal taken from the Beehive Records video to him.

Barrett reply to me: Yep that’s the one at Beehive.

I can humbly said that I now own a piece of music history here. 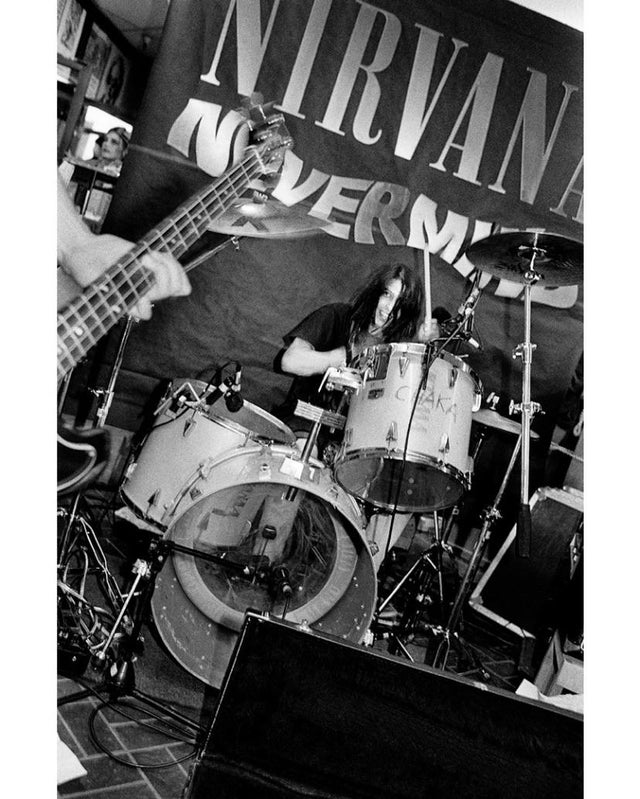 Here is a photo of Dave Grohl playing the Cymbal at Beehive Records by Charles Peterson. Here is an article from The Seattle Times October 19, 2021 about Dave Grohl & Barrett Jones. 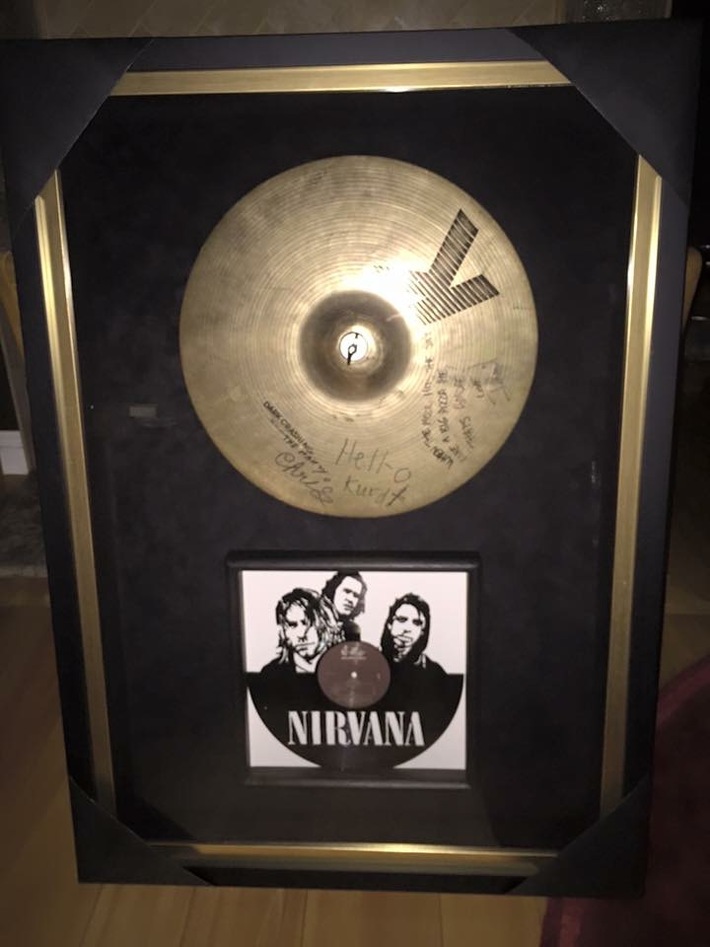 Rock My Collection “Smells Like Nirvana” on AXS TV Oct 10, 2021 about my Nirvana Signed Cymbal.

The next step is for me to try and find out whether this cymbal was used in the recording of Nirvana "Nevermind" album. Will keep everyone update. :)

Wow, what a beautiful and in depth article on this cymbal! Congrats to you my friend, and thank you for an excellent blog. You can't get much better than owning a piece of history!

This was such a great read. Not many would go to the depths that you did or be able to contact the people you did to try to get to the bottom of it. It all paid off. Congrats on such an amazing piece.

This was a very fun read indeed. The lengths of trying to figure out its origins was so much fun and it felt like as the readers we were able to go on this journey with you. Thanks for sharing!

Love the thoughtfulness that goes into your items.  Great provenance and great set of autographs.

Incredible detective work as usual, J.Seah! What an epic find and back story you have now discovered! Kudos to you my friend!

Wow, that's amazing. You had me on the edge of my seat. Congratulations and well-earned. Scott

Agree with the others.  This was a terrific read, a great story and an incredible piece of history.  Huge congratulations.  Very happy for you.

Beautiful and such research! Stunning work.