I was listening to sports talk shows on the radio. They can be a lot of fun, but sometimes they drive you nuts. How many times can I hear people debate who is better between LeBron James and Michael Jordan? Or if the Lakers Lonzo Ball will be the next Magic Johnson, Jason Kidd, or … Todd Marinovich (anybody remember him? Last we heard, he was naked in a backyard with drug paraphernalia...but I digress). Imagine my excitement when I heard this story today and thought it would be a perfect blog. Last year, anybody that followed football was surprised by the emergence of the Dallas Cowboys, being lead by two outstanding rookies -- quarterback Dak Prescott and running back Ezekiel Elliott. When everyone thought the team would go back to Tony Romo behind center, Prescott came out like gangbusters. He did so well, it basically ended Romo’s career and he retired.

You know those sports cards that are autographed? Well, Prizm Football apparently released some that were autopen. The company Panini America released a statement about it Friday.

Prescott and his representatives say they have no knowledge of how this happened. 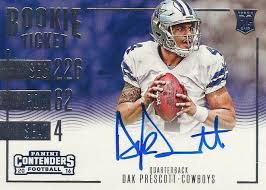 An announcement was also made that there’s a long-term extension for Prescott to exclusively sign cards through Prizm, and that if you card a card, they’ll replace it with remanufactured cards. They asked that you send them back. The new ones will feature a special Dak Prescott hologram to differentiate them.

The company said, “Prescott has autographed thousands of Panini America trading cards during his rookie season.”

Uh, okay. Well, can somebody explain how autopen cards got out then?

Since I’m not a card collector anymore, I think back to the time being a kid that had a large collection. What I would’ve given to have gotten one of those baseball cards with a real signature, instead of one of those printed on autographs and a stale piece of bubble gum.

For what these guys get paid it is sad they can't sign the darn cards.

I love the scene in "Jerry Maquire" when Tom Cruise, in the beginning, is getting frustrated by what he sees in sports. And one quarterback refuses to sign a card some kid hands him, because it's the brand he doesn't endorse.