I’m not much of a country music fan. The closest I get is Johnny Cash and Dolly Parton. Yet I’ve found that country musicians are among the best autograph signers (according to my friends and fellow collectors that meet them). One example is Garth Brooks.

There were a few years in a row, where he’d play with the San Diego Padres during their pre-season workouts in Arizona. Brooks would sign hundreds of autographs for the fans waiting; baseballs, photos, albums, CDs, everything handed to him. He’s also the singer that’s given away more guitars than anyone else I’ve ever heard of. For years, I’ve heard stories about him giving fans guitars. And I always think about this story Joe Walsh (The Eagles, James Gang) told me during an interview. He said people always come up to him and ask if they can have his guitar. It always shocks him, and he responds with, “No. No you can’t.”  (side note: at the Joe Walsh/Bad Company shows this year, they were selling guitars signed by both bands at the merch booth, for $500; pretty good deal, especially since it had the Bad Co logo on it, which makes it a must have for any Paul Rodgers/Bad Company fans). A man named Bob Brown (no relation to Whitney’s ex) had worked at the San Diego Sports Arena (Valley View Casino Center) for 40 years, working the box office. He’s retiring. The arena operator told Brown he needed to wear black overalls, and shoot confetti into the audience during the concert. He did that, but what he didn’t realize is that Brooks’ was going to hand him a guitar as a retirement gift. Brooks took his guitar off, signed it “Good luck, God Bless,” and added a smiley face (don’t you love how Chuck Berry always adds smiley faces to his signatures?). Brown was stunned, and almost collapsed.

He had been working the box office in 1996 when over 42,000 tickets sold in two hours, for a few Brooks’ shows. It’s a record that still stands.

Well, there was a woman in the front row freaking out by this. Brooks, noticing her reaction, handed one of his guitars to her. That got his crew scrambling, to find him another guitar he could perform with.

Someone in the audience approached that woman, offering her $500 for the guitar (which wasn’t signed). She wouldn’t part with it, though. That also reminds me of a time when I saw Joe Walsh do a benefit concert for a local school. Tickets were $100, and they had a guitar signed by the Eagles they were auctioning off. I think the winning bidder got it for $4,000. As I was looking at it outside the venue, a guy came up begging him for it. He offered a few hundred bucks, and a Joe Walsh guitar pick. The guy looked at me, then at the person wanting it, and said, “Dude, I just paid a few grand for this. I’m not giving it up for a guitar pick!”

But, back to Brooks. 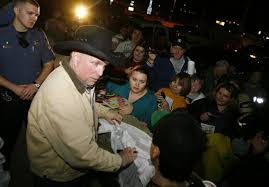 Somebody that worked with him said he doesn’t usually hand out multiple guitars during shows, but they do have some VIP packages that include signed guitars.

So, if you have the money and do the VIP package...or you see Garth playing baseball -- you’re in luck.

Comment by Barry S on August 15, 2016 at 7:15am
I'm not a huge country music fan either. I just saw the Bad Co/Walsh show. Killer show. I knew Brooks was a big country star but really didn't know how big. My friend is a big Fan. He was going to Atlanta a couple of years ago to see him, so I looked it up for curiosity. He sold out 5 shows in a row there. After further research I see he's one of the top grossing of not just country but all musicians. He's up there with the Stones, U2, Floyd, Eagles. He keeps his tickets at a reasonable price, same price for every seat. He appreciates his fans, doesn't take advantage of them.

I was a bit disappointed with the Joe Walsh show. I have seen him live about 10 times, and...he seemed to be playing a bit slower, and lethargic. It was cool he did the song "Take it to the Limit" and dedicated it to Glenn Frey. That was nice (albeit a weird video to go with it). But, my favorite James Gang song (The Bomber), was just played a bit slow for my tastes. But ... I was tempted to buy that guitar.

Comment by Barry S on August 15, 2016 at 7:38am
It was my first time seeing Walsh. Yes that was cool playing that for Frey. He made me laugh, before he played "life's Been Good" he said I'm sick of this song. But I'm going to play it anyway. If you know the words sing along, if you don't, sing something else. Says that every show I'm sure. I was tempted by the guitar also, was surprised to see it.

You know what he said before that song out here? He said, "If I would've known I was going to have to play this song for the rest of my life, I would've written something else!"

My girlfriend thought that was hysterical.

I read Joe had sold guitars off to Jimmy Page & Pete Townshend in the late 60s.

Danny...it's strange that you said that, because in one conversation I had with Joe Walsh, he said something about how one of his favorite guitars, was one that Pete Townshend had given HIM!!!!

Comment by Joseph Palreiro on August 21, 2016 at 3:04pm
I worked a few shows for Bob Brown when I lived in San Diego. He totally deserved a moment in the sun/spotlight.

Here's a clip of Bob receiving his retirement gift from Garth.