Since the guitar George Harrison played (I wrote about it a few weeks ago in a blog) recently went at auction for almost $500,000, I couldn’t help but wonder how much BB King’s daughters are going to get for his various “Lucille” guitars (What? Too soon?). I’m guessing he has at least 10 of them, and they’ll probably get half a million each, no? 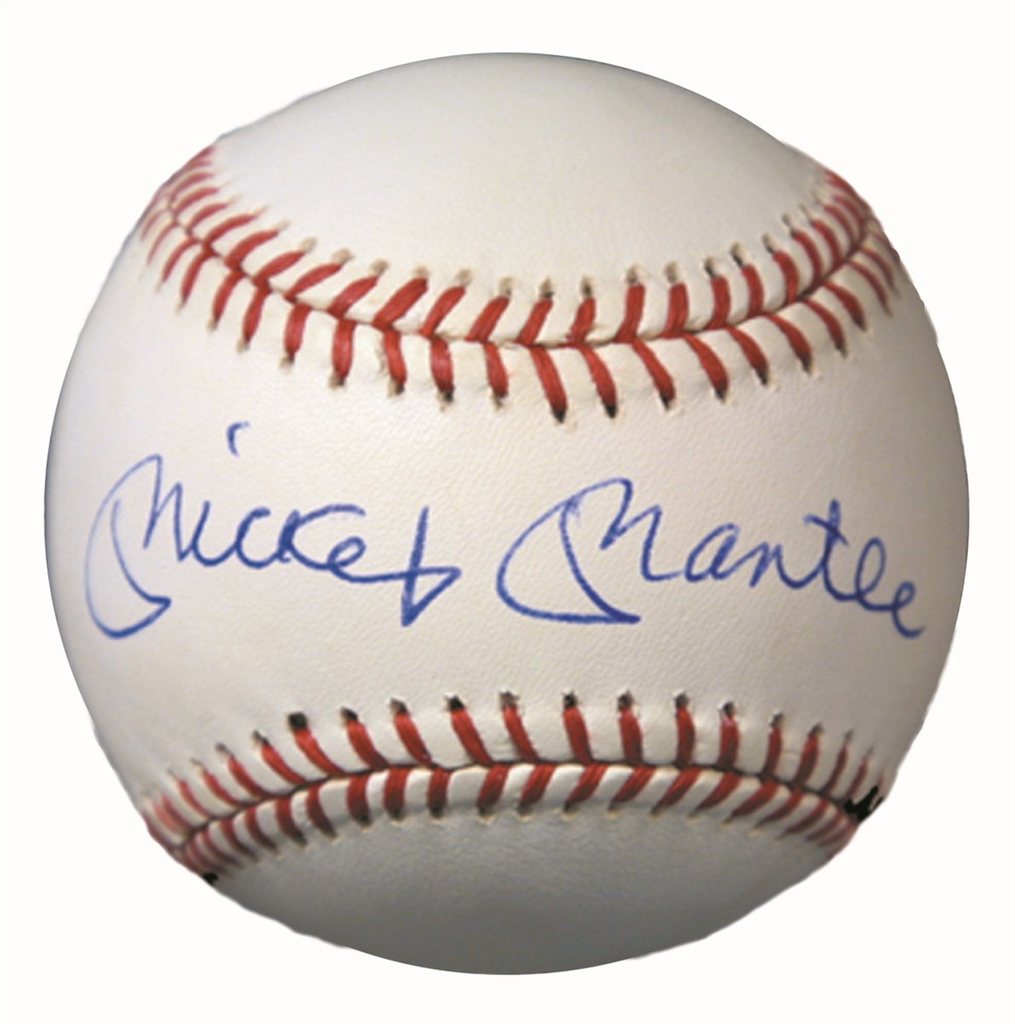 A story in the San Diego Union-Tribune sports section yesterday, talked about a woman named Judy Mantle. She’s the College of Education Dean at National University and threw out the first pitch before a Padres-Nationals game Friday night. When your last name is Mantle, you get asked if you’re related to Mickey. Well, she’s a distant cousin, but never met him. Yet she does have his autograph but surprisingly, didn’t acquire it the way a relative might.

It was several years ago at an education conference. It was at Mickey’s New York City restaurant, and they had pre-autographed and authenticated baseballs. Judy Mantle was quoted as saying, “One said ‘To Judy, Best Wishes, Mickey Mantle.’ So $1,200 later I have that ball.”

It’s amazing to think that even distant relatives sometimes have to pay for autographs (and overpay, since for years you could get an autographed Mantle ball for $100; and one that wasn’t personalized, which makes it less valuable).

The fun story I read in the paper was a few days ago. It made me think of the weird things collectors want from the stadiums and places their heroes played. I was in Liverpool when the old Cavern, where The Beatles first played, was being torn down and a new one built across the street. It didn’t occur to me to grab a brick from the original place, and they were all over. Although on a Beatles tour, the bus driver told us so many “Abbey Road” street signs were stolen, after 3,000 replacements, they stopped. Instead, they just paint the name on walls. I’m guessing had there been signs, I probably would’ve tried to snag one of those. I realize it’s being a thief but hey…Abbey Road is a damn good album! 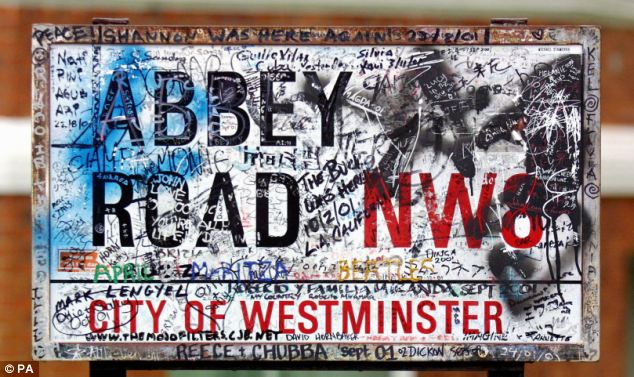 I was dating a woman who, when we were in Los Angeles, had to get some sand from the beach in Venice. Her friend was a huge Doors fan, and he had gotten dirt from his graveyard in Paris. He didn’t feel his “collection” was complete without sand from the beach where Morrison’s bare feet once walked. It’s the beach where he sang “Moonlight Drive” to Ray Manzarek, which convinced him they should start a band. 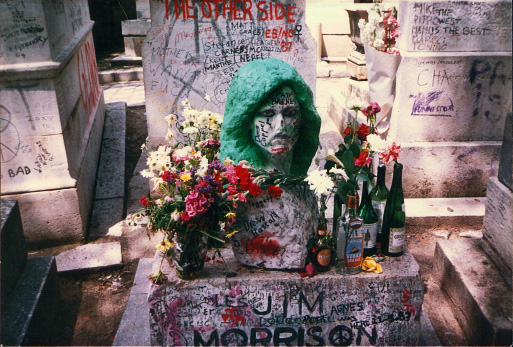 I bought an autograph of NBA Hall of Famer Bill Walton (he’s a local legend in San Diego, and used to sign all the time, but he refuses now). The piece I bought was relatively cheap, and also signed by UCLA coaching legend John Wooden. It came with a piece of the floor they played on, too (if memory serves).

I remember when the Celtics were once tearing up the old, classic parquet floors, they were selling pieces of that. Would’ve loved to have gotten one of those, and had all the greats sign it (even though I hated them because of the rivalry with my Lakers).

The New York Yankees once sold pieces of the centerfield wall of their old stadium for just over $100.

So I had to laugh when I saw the New York Islanders were selling “melted ice” from their final game at Nassau Coliseum.

They’re packaging ½-ounces into vials at the team store, for the low, low price of $20.

The Coliseum has been their home since the early ‘70s, and they won four straight Stanley Cup’s there in the early ‘80s.

I’m guessing New Yorkers that were silly enough to buy some of the dirt from the infield of the old Yankee Stadium (those went for $10), will jump at the chance for some ice…errr…water. Which leads me to wonder…if you ordered it, would you store it in the freezer? Would you kill your wife if she got mad you didn’t fill the ice tray back up and she decided to use that as an ice cup in her drink?

Obviously, no cool way (no pun intended) to display your water/ice, but hey…I’m sure they’ll get lots of orders.

I’m not much of a hockey fan, but I’d buy a team autographed Zamboni in a heartbeat! Made my morning before work.

Comment by Paul on May 18, 2015 at 4:10am
Josh, sure it wasn't you edging your girlfriend on getting the sand, being the Doors your fav band. You can tell me. Lol.

The dirt from Yankee Stadium always cracks me up. Steiner advertises it all the time and I can't help but laugh at people who pay for DIRT. At this point I'm surprised doesn't sell Derek Jeter signed sliding shorts that have s*** stains in them, signed and inscribed.

Here's one of my favorites, Tony sent me this after Kris Bryant's debut: 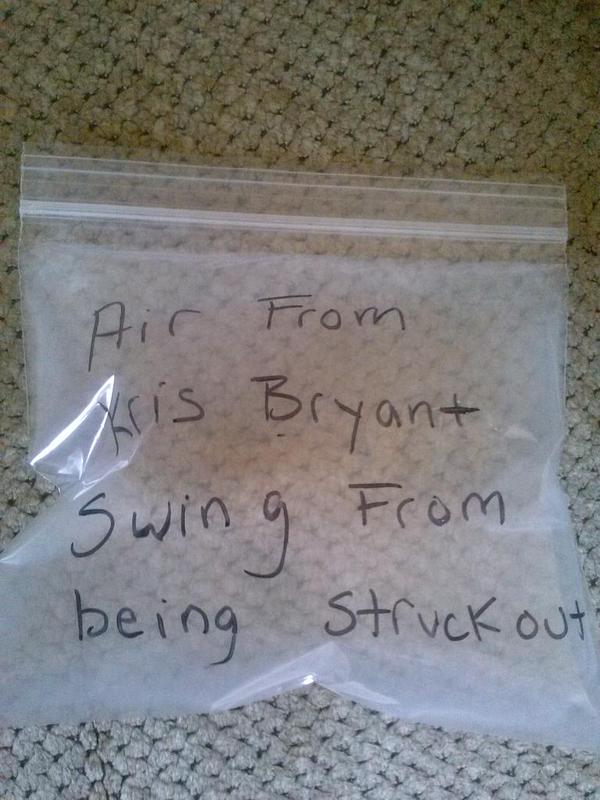 That "air bag" is funny. And yes...The Doors are my favorite group, but I don't collect dirt. Now...I wouldn't be above digging dirt, and possibly trying to steal Morrisons skeleton. Anybody else in??? Come on! They dug up Gram Parsons, let's get Jimbo!