The first few sold for a lot, but more and more started popping up and it lost the novelty value.

Well, I thought about how much you could get for a deflated football that Brady signs, “Sorry I deflated balls.”

I’m guessing he wouldn’t do it, but it’s fun to think about.

Another joke that came to mind was the theft of clothing from Demi Moore the other day. She claims it was $200,000 worth that was taken from a storage unit she was renting in North Hollywood.

What’s suspicious to me about that story is that it was somebody from the movie Margin Call that noticed it was only a few designer items stolen. It’s as if the thieves knew the high-end outfits, and didn’t bother with the Pink Floyd T-shirts. Oh, and there wasn’t any sign of forced entry.

Now…the fact that a javelin was found on the scene…leads me to believe that it could’ve possibly been Bruce Jenner.

Okay, okay. Enough of the jokes. On to the other stories about clothing. I was reading the latest Esquire magazine and there was an interview with Neil deGrasse Tyson. He’s always a blast in interviews, because he’s so enthusiastic about everything in life, not just astronomy. During one portion of the interview, he talked about his love of New York sports teams. He said that a high school classmate was a ball boy for the Knicks, and that his shoe size was the same as Walt Frazier. Frazier would throw away sneakers after every few games, so this ballboy would “sneak” them out of the trash and give them to Tyson. He said, “For about half a year, I had a supply of sneakers. They were expensive…and game-worn by Clyde. And I liked Pumas.”

I recently wrote about the Michael Jordan sneakers that sold for a lot, but for my money, I’d take a pair of those size 13 shoes, signed by Frazier and Tyson. That would be a collectors item! Now…on to the expensive clothing memorabilia.

Julien’s Auctions is having a “Music Icons” sale on May 15th in New York. There’s the American flag tank top Madonna wore, I believe in the video of her remake of “American Pie.” It also accompanied her onstage during the 2001 “Drowned World Tour.” It’s expected to get between $20,000 and $30,000.

There are a few signed Beatles albums, and a few John Lennon items that Beatlemaniacs will go nuts over.

There’s a Mastersound electric guitar that George Harrison played in the early ‘60s, including at the famous Cavern club. It’s expected to get around $600,000 (on a much cheaper note, you can buy a brick from the original Cavern, which has since been torn down). 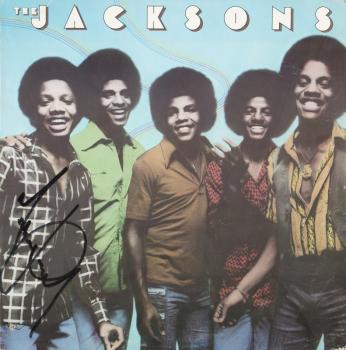 There’s lots of Michael Jackson autographs and various stage worn outfits, including a red face mask he wore for “privacy.” I’m guessing the items that will fetch the most will be stage worn outfits (one of which is autographed)…and one of his famous gloves, lined with black Swarovski crystals (which are beautiful crystals I highly recommend, if you have the means).

The black glove Jackson wore in a video is expected to sell in the 6-figures.

The Monkees’ Davy Jones has a large collection of his stuff, including outfits, autographs, and a drivers license.

I’d rather have the Steve Tyler credit card (I’m guessing it’s been cancelled). Imagine what things that may have been used for!

Speaking of which, they have some pill containers from Elvis, as well as many shirts and a karate uniform.

As a racquetball player, I liked seeing one of his racquets. It probably won’t get any bids, as it doesn’t look as nice framed as a guitar would.

If you have room, you can get a tour bus Elvis used. It’s rather long, but seems like a steal at $75,000. The neighbors will love seeing it in the driveway, or taking up spaces in front of their house.

The more expensive Elvis vehicle is the 1971 Stutz Blackhawk. It’s going for $200,000 (my early prediction: Jay Leno will get it).

There are lots of Cher and Elton John outfits.

Many, many guitars from Carlos Santana, as well as a few signed ones by James Taylor.

There’s a Stills, Nash, and Young one…minus the David Crosby signature, of course. I wasn’t interested in the Clapton guitars, but the one signed by Cream…made me cream.

There was clothing from Madonna (yes, she actually wore some on occasion).

For autograph collectors that like clothing memorabilia, I recommend the signed satin gloves.

I’m guessing the Lance Bass Yamaha grand piano won’t sell for us much as John Lennon’s piano once sold for -- $1 million. It was purchased by George Michael, who is probably an ‘N Sync fan. He should purchase it cheaply, and he’d have a pair that would look nice in the living room.

There are a few sets of handwritten lyrics – Bruce Springsteen and Johnny Cash among them.

There are some psychedelic Jimi Hendrix stage worn costumes, as well as a shirt Buddy Holly wore on stage (according to his wife).

Not sure if the Britney Spears childhood ballerina leotard will sell, but some of the more contemporary singers have outfits for sale: Jennifer Lopez, Jennifer Hudson, Alicia Keys, and Mariah Carey, to name a few.

Two of the weirder items you can bid on, include Kurt Cobain’s signed hospital records and a Michael Jackson signed pillow case.

Imagine all the children that have slept on that (what? Too soon?) I don't think this is the forum to get into that Josh, Jacko with the kids,its more about collecting autographs.

Oh come on, Paul. Just a little levity. And besides, Michael Jackson has said himself, that he let many kids sleep in his bed.

Also, I think that a topic like that CAN be brought up in regards to autograph collecting. For example, OJ Simpson murdered two people (no need to write "allegedly" since he did it). Yet people still approached him for autographs.

Roman Polanski raped a 13 year old girl...yet he still makes movies with the biggest names in Hollywood, and people still ask him for his autograph.

So actually, it's an interesting topic to bring up in regards to this.

Comment by Paul on May 12, 2015 at 1:03pm
I like a lot of artist for there art, a lot of them have great eccentricities most of them I don't go much on their personal lives.
Freddie mercury would sleep with anything that moved and if it didn't move he kick it. I'm not sure if it's the right place to say he was a raging queen or Mj was a kiddie fiddler.
But I like your blogs.

Comment by Paul on May 12, 2015 at 1:57pm
Maybe as society we are looking at the wrong people.
How many people don't stand for domestic violence, yet happy to watch the mayweather fight.

Comment by Paul on May 12, 2015 at 4:20pm
Oj, is doing time for stealing his own autographs plus a little bit more. Haha

I thought O J was doing time for his acting.

Comment by Paul on May 13, 2015 at 11:18pm
I need to going graphing for two paw prints Pistol and boo Johnny Depps dogs that have been smuggled into Australia, escaped quarantine, flying in on Depps flying jet. Now pistol and Boo have been told to leave or be put down. Poor little pooches.

That's Crosby's signature on that guitar, no sight of Neil Young on there though.

I don't trust the pillowcase. There are a bunch of those and similar items that have popped up.