When St. Louis Cardinals Hall of Famer Stan Musial died at 92 (a year after his wife), I was bummed to hear that his family was going to sell off his memorabilia. I thought about how if I was one of his kids, I’d want to save those items.

Heritage Auctions of Dallas ended up totaling $1.2 million, a lot more than expected, when the auction ended over the weekend.

Some of the items included game-worn jerseys, World Series rings, and harmonicas that he was fond of playing.

The family did give some items to various organizations, including the Cardinals, but grandson Brian Schwarze said that his 4-bedroom home was stuffed with so many things he collected over the years they decided an auction was the best way to part with it. I’m guessing it also cuts down on the fights you’d have with family. I mean…just imagine if you were offered one of his jerseys, and your brother was offered one of his World Series rings. Easier to just split the money from the items that are sold.

One of those rings went for almost $200,000. A letter from Ty Cobb went for over $70,000 (Cobb autographs are rare and very sought after…most of them in his green ink).

My favorite item in the auction was a baseball signed by Babe Ruth to Musial -- when he was merely a minor league player in 1941. That fetched $53,775. 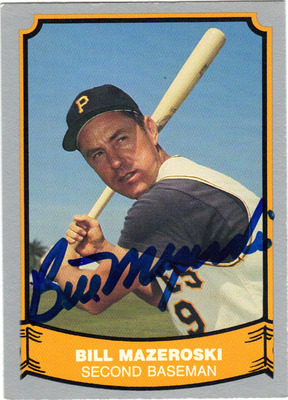 Another baseball auction from a few weeks ago, had former Pirates second baseman Bill Mazeroski selling memorabilia from his Hall of Fame career.

The Louisville Slugger Museum & Factory auctioned them, and they included a jersey worn in Game 7 of the 1960 World Series (he hit a home run in the bottom of the 9th, giving Pittsburgh the championship).

In basketball, I’m sure many sports fans saw the scary highlight from the latest Harlem Globetrotters game a few days ago.

As a boy, I loved nothing more than watching the Globetrotters perform their magic. As a teenager, I realized it was like wrestling – fake. I mean, how could the Washington Generals lose 2,000 straight games? And why did they play such poor defense? I thought that perhaps a Generals player was mad with the losing streak and rigged the basket in the accident that happened the other day at a game in Honduras. You wouldn’t blame him if he did. After all, his shorts were probably pulled down and he was humiliated in front of the crowd in Tegucigalpa.

One of the things the Trotters have been doing the last decade is a slam dunk, in which the player pulls himself onto the rim. It’s a great visual (and would get you a “technical foul” in the NBA).

William “Bull” Bullard did the dunk on an alley-oop and as he was pulling himself up, the backboard came crashing down on top of him. Glass shattered everywhere and the backboard put a gash on his face right above his eye. I immediately thought about how Darryl Dawkins broke a few backboards in NBA games (and how nice he was when he signed an autograph for me after a game when I was 12).

Later in the game, Bullard came out in sweats, with his face bandaged up. He waved to the crowd, and was seen signing autographs for the kids hanging over the railing with papers and programs.

Hopefully it’s a speedy recovery, and he’s back to throwing buckets of water on the refs in no time (as long as that doesn’t cause water damage to any of the autographs the fans in the front row have acquired). I tried writing to Meadowlark Lemon a few years ago and never received a response. I would like to have him and Curly Neal.   My son and I checked out the Scooby Doo episode they were on from the library this past weekend. What a classic episode. Jenkies!

I met medowlark several years ago and seemed like a decent guy! I have also tried to get curly neal and no response either!

I have a great set of Harlem Globetrotters basketball cards from the early 70s. I love them. When I did sports for a morning radio show, we'd often have athletes come in that I'd interview (also meant lots of cool autographs!). Well, Meadowlark Lemon was the first guest that ever became a "no show." And what sucks about that is...somebody brought in a basketball hoop and set it up in the parking lot so we could play one-on-one. I was thrilled that was going to happen, as I played basketball growing up and it would've been fun to say I played a game against a Trotter. Well, every other time if an athlete was running late, my co-host would say "I hope you don't get 'meadowlarked' again." That was our word meaning "no show." But...get this. He sent an apology basket with fruits and cheeses in it, a pair of tickets, 2nd row, to the Globertrotters game that night, and an autographed picture (it was a 5 x 8)...so, that was kinda cool.