If I’m doing a story about Doodles and autographs, I’d prefer it to be about the unknown comedian named Doodles Weaver (related to actress Sigourney). He was a brilliant comedic mind, and ended up killing himself when medical issues popped up. I know somebody that currently has a signed Doodles Weaver picture (pictured here). It’s the first autograph of his I’ve ever seen.

But no…this story is about doodles, as in drawings.

There are lots of John Lennon doodles. Some lucky folks got his self-portrait caricature when he signed an autograph (it also led to many people forging that doodle, along with the signature). 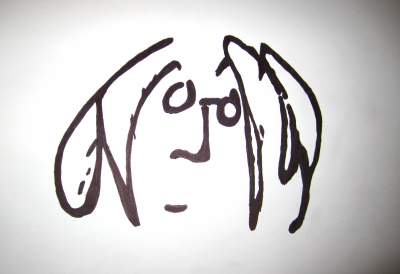 Jim Morrison did a lot of doodles that looked Native American. Sometimes you’d see those on his handwritten lyrics or poems (his drawings were a lot more cryptic).

I laugh every time I see an autograph of artist Peter Max, and the seller wants so much money because a sloppy drawing accompanies it. Yet Max does this all the time.

A lot of times doodles won’t be accompanied by an autograph. A famous person may have been on the telephone and doodling on a notepad. After they left, whatever person was nearby takes the scrap of paper and saves it. Of course, they pop up on eBay years later.

The first time I read a story about John F. Kennedy doodles was in the mid-2000s. The AP did a story about a time President Kennedy was flying aboard Air Force One months before his assassination. Before landing in Wyoming, he took out a piece of stationery and wrote below the presidential seal: “Report action in Texas” (there was a little debate on whether he wrote “report” or “request” which makes the piece even more intriguing).

Below that he wrote “John Connolly,” the name of the Texas governor.

The fact that the note had the seal, it involved the place he was murdered and had some doodles on it, made them interesting to view (they were on display at the JFK Library and Museum).

Some of the doodles were grim and others uplifting. Most were what doodles usually are – indecipherable images without much meaning (although I’m sure a psychiatrist that does the ink blot tests with patients would disagree).

Evelyn Lincoln, his secretary, saved many of his doodles and labeled and numbered them. Many of them had sketches of boats, and lots of them were on legal pads.

It’s now been 50 years since JFK was assassinated.

I just hope the guy buying the Oswald wedding ring wasn’t going to use it to propose. You know how women get about this kind of thing.

I laughed reading Bobby Livingston of RR Auctions, describe the doodle they have in their current auction. He said, “Considered one of his most charming sailboat doodles and the most historically significant, due to its November 21st date, this is certainly one of the most desirable pieces of Kennedy memorabilia available.”

Uh…the sailboat drawing isn’t that great. He is right about the date, though. It was drawn the night before the Dallas motorcade at the Rice Hotel. And get this…it was retrieved from the garbage the morning after Kennedy’s stay at the hotel. The person returned it to Lincoln, who authenticated it with a message on White House stationary. The Kennedy Library recognized it on a tour as the last doodle he drew (they took a Xerox of it).

Ronald Reagan was known to doodle a lot (as well as nap). George W. Bush wasn’t a doodler, per se, but we’ve all seen his paintings pop up recently. They weren’t very good.

Thomas Jefferson once sketched out a pasta making device. Who knows why. Now…I’d love to see some drawings Ben Franklin did of inventions.

I’ve seen a lot of plays Vince Lombardi has drawn, with the X’s and O’s…but I’ve never purchased one of the legendary Green Bay Packers coach. Mostly because I’d always doubt their authenticity.

Going back to JFK, I read that he wrote two speeches while he was in that hotel. I’ll save my money for when those hit the market!

Josh, did you happen to catch "JFK, The Smoking Gun" on the Reelz channel?

After all these years, I am still obsessed with the John F. Kennedy assassination.

Comment by Steve Zarelli on November 10, 2013 at 4:25pm
I watched the Smoking Gun on Reelz. Very interesting and compelling.

Christopher, I didn't see it. BUT PLEASE, tell me you realize it was a lone gunman. It really was just Oswald. Read the book CASE CLOSED. You'll be convinced, that the truth is -- Oswald acted alone.

Josh, I remember years wanting to read the Posner book, but never got around to it.

I have a copy of "Case Closed" coming via Ebay.