Two years ago, I met Dominic Chianese at Westchester County Center in White Plains, New York.  My wife and I gave him a box of Italian pastries from Arthur Avenue in the Bronx. He was very appreciative and kind.  While he was enjoying his sfogliatella, I noticed some of the items that he was autographing.  Photographs of Johnny Ola and Uncle Junior.  He was also autographing sheets of small stickers.  I realized that the autographed stickers would one day appear on trading cards.

Many autograph collectors display their autographs by matting and framing an autographed album page or an autographed index card along with a photograph of the celebrity.  How is this any different?  After all, the autographed stickers are a separate item. 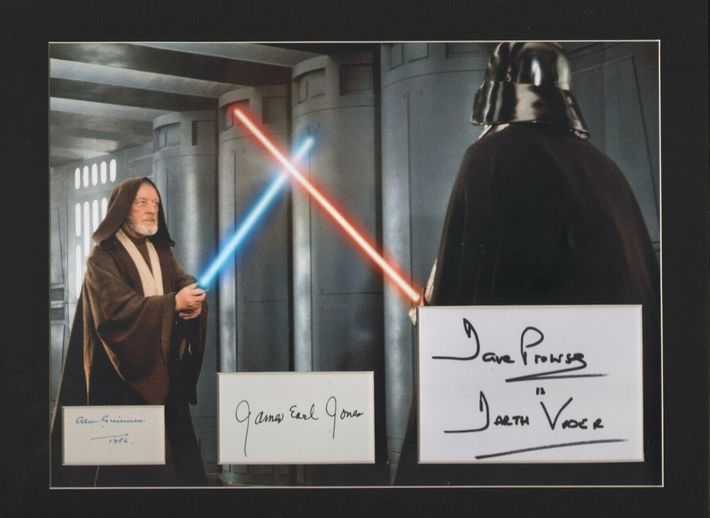 Joe W has discovered a very unique way of matting and framing his autograph collection.

As autograph collectors, we all have our own degrees of toleration.  Personally, the trading cards scenario does not bother me.  Neither do the book signings.  However, if autographed stickers were to appear on photographs and sports memorabilia, I would not feel the same way.  Regarding framing habits, to each their own.

That is the wonderful thing about collecting. The variations are many and every collector finds their personal preference. I happen not to be a fan or collector of autographed trading cards but many are.

I am honored and humbled you have displayed one of my pieces. I know most collectors prefer signed photos but I prefer signatures. I see an autograph and a "vision" enters my mind and I try to create that vision. It's a physical way to express my personal memories and my interests. There's a piece of me that becomes a part of the finished piece.

Best of all, if I ever get tired of a certain piece, I can find a new picture and relocate the signatures quite easily. The most important aspect is to enjoy your collection and, when the opportunity presents itself, share it with others.

I am glad that you enjoyed seeing your Star Wars piece, Joe W.  I love the way that you have presented it.  Stay well.

I can only speak for myself, but I absolutely detest signed stickers on cards. I understand completely why it's being done (it's far easier on the signer versus a stack of books or other memorabilia), I think it's fine if others want to collect it, but I find it often comes across as somewhat "cheap", like either the company that issued said stickers or the signer themselves didn't think enough (or want) to sign actual items.

Same goes for bookplates, which I typically stay far away from save for very specific circumstances (it's tied in to a certain event or function that has direct relevance to the book in question). I purchased a book earlier in the year signed by a specific author that had a bird theme, but I bought it because it was integrated with a book on birds that the author's deceased husband wrote, and which had been reissued in a new edition. Beyond that, I typically don't touch books with bookplates, and I prefer having the.... comfort of knowing the author in question held the item and signed it, even if just for a moment.

That is a great point about the comfort of knowing that the person actually held the item that they autographed.  Thanks for the comment, Crazy Rabbits.

Personally, I believe an autograph is an autograph no matter what it is signed on. It was still held by the signer. As long as it is authentic someone will want to collect it. The medium the signature is on does have an affect on the monetary value of a signature.

Personally I think trading cards are their own weird thing, autographs or not, and hence wouldn't really consider them part of the broader hobby (strange as that may sound). The past 25-30 years have given rise to so so many gimmicky things in that realm that I more or less ignore what's going on there.

Collecting sports cards as a hobby has certainly become interesting recently.  Thanks for the comment, Rich.

Autographed baseball cards are a great way to collect sports memorabilia. However, many people can’t afford the prices of authentic autographs. Fortunately, there is an easy and inexpensive way to get autographed baseball cards that look real. I have to visit best essay writing sites in order to get help in my essay on time. You just need a Sharpie marker or Copic markers and a stack of blank discounted baseball cards. Buy some cheap unopened packs of signed baseballs, preferably out-of-the-pack player cards that have not been prepped for sale by dealers who buy them in bulk.