The Super Bowl is only days away. There are two stories we’re hearing so much about. There’s “deflate gate.” For those that don’t know, it’s the New England Patriots being caught cheating yet again, by deflating the footballs slightly, so they were easier to throw, catch, and hold on to.

There’s also the story of Seattle Seahawks running back Marshawn Lynch. He’s always fined by the NFL for not talking to the media after games, and he’s up to his same idiotic behavior at the media day for the big game.

So let’s get back to some nice stories with athletes (and of course, they’ll involve autographs).

Green Bay Packers QB Aaron Rodgers isn’t going to the big dance. Yet he still made the news. He’s heavily involved in Wisconsin-based nonprofits, and he spent the last few weeks visiting four kids whose dads died while serving in the military. They got to attend “Camp Hometown Heroes” which is a free camp for those that lost loved ones.

A few of the kids were handed autographed footballs, and they were thrilled. One young girl, not so much. She said to Rodgers, “There are these kids in my class that love football and they are a fan of you.”

Rodgers smiled and quickly responded, “Are you not a fan of football?”

She answered, “Not really. There’s so much going on.”

And when you think about how she lost a father – and how we’re all worried about who will win the big game, and what toppings we’ll get on our pizza that day – it sort of puts everything into perspective.

Hometown Heroes has helped 200 children, and Rodgers promotes it on his website. When the video of these girls appeared on YouTube last week, it raised an additional $7,000 in donations.

I remember when I had the cable guy come to my house, he saw some of the Make-a-Wish items I had. He talked about what a great charity that was, and how professional athletes can be so nice. He once installed cable in a relative of Shaquille O’Neal’s – and Shaq insisted on him taking a $200 tip, even though he said he wasn’t allowed to.

I told him a story I heard from a friend who had a child at one of Shaq’s basketball camps. She was in the stands when Shaq was talking to 25 kids sitting around the court. He said they were going to have to get up and run some laps before they started playing. One child didn’t stand and Shaq started to rag on him for not wanting to run. It was then that he saw the child was in a wheelchair. Shaq asked him what happened and the boy told a story about a car accident, which took the life of his father. Shaq was moved, and spent the rest of the day cheering the kid up. When the child talked about not having enough money for a computer, Shaq bought him one. Now, here’s the kicker. Shaq sent that kid an email every day for an entire year, always checking in on him. Talk about going above and beyond.

But hey – this is supposed to be about football players.

So, a woman I was dating recently, has a daughter that just started dating a guy that was injured in the military. As part of the Wounded Warrior program, the New England Patriots came to visit a bunch of them before a game against the San Diego Chargers. The guy told me they weren’t the most talkative bunch of guys (anybody that’s seen coach Bill Belichick in interviews knows that already). Yet the players were handing out caps and all signed autographs. He proudly took off his cap and showed me the signatures of future Hall of Fame QB Brady and coach Belichick.

The soldier told me, “It’s weird that the Chargers have never come to visit us, but we get the opposing team in the hospital shaking hands and signing autographs.”

I'm guessing these injured soldiers (true "patriots"), will be rooting for the team that was kind enough to pay them a visit. 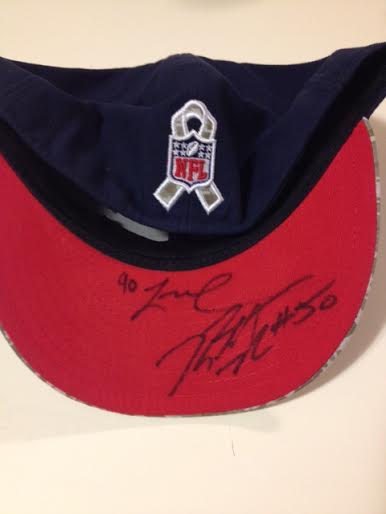