The Day I Met Tom Petty

I've never seen Tom Petty play live. I had a few of his albums, as well as his Greatest Hits CD (love his cover of "Something in the Air"). When I worked at a classic rock radio station in the early 90s, I was ticked when he did an interview show on another station and some of the DJs from our station went to the taping. They all got his new album, Full Moon Fever (with the terrific "Running Down a Dream") autographed. Had I know, I would've been there. Or at least given them a record to get signed.

Just a few weeks ago, Tom Petty and the Heartbreakers played at this Kaboo festival in town. He had played last year in town at a small venue with his first band "Mudcrunch."

Believe me, I've had many opportunities to see him live, but never did. When he played at my old college SDSU about 10 years ago, I figured I'd go up there and get him to sign an album for me. Now, I usually wear a T-shirt with the artist, if I have one. I figure that let's them know you're not an eBay seller but a real fan. I had a shirt from the '70s, that I bought when a record store was going out of business and it was an XX Large. That was too big for me as a 5th grader, but fits me nicely now. Well, there were about 5 fans waiting, and we see two white vans pull up. Petty walks out of the first one, and is stoned out of his mind. He's wearing sunglasses and smiling, as he walked by us. I asked for his autograph, and he just smiled, as he walked by. Inches from me...and he's not saying a word. Another guy in the band got out, and one of the fans went crazy. He apparently was the original drummer for the Average White Band, and this fan knew that. He got his autograph and they talked for a few minutes. A few of the other band members got out of the other van. It took me about 30 seconds to remember the guitarists name. Because of his long, curly black hair...I just kept thinking of Brian May from Queen. Then I remembered, and yelled out, "Hey Mr. Campbell? Can you sign my album?" He merely scowled and walked by me. I was pissed. 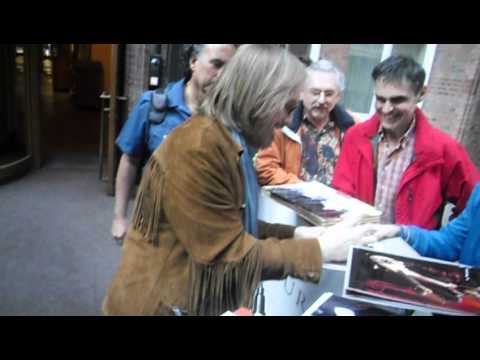 A year later, Mike Campbell and some other members of the Heartbreakers started a band called "The Dirty Knobs." They were playing a venue in San Diego for a mere $5. I was going to go to that, and get their autographs there. After they signed my album, I'd ask him why he dissed us at the Tom Petty show. I wanted him to have to answer to that. But...as (bad) luck would have it, that night I was at an event in Beverly Hills with Paul McCartney (when I got him to sign my Sgt. Pepper record). I figure it was better to get that taken care of than yell at somebody that dissed me.

Anyway, with the shooting at the country music festival in Las Vegas, and the death of Tom Petty...it feels like there's this sadness over music right now, which made me also write this parody of "American Pie" (the day the music died). Here it is:

A long, long time ago

And if I only knew …

That when he played Kaboo…

It would be my last chance.

But October made me shiver

A shooting in Vegas, it figures.

Bad news on the radio…

I couldn’t take any more

I’ll always remember how I cried

“Damn the Torpedoes”, by my side

“Hard Promises” next, for a stereo ride

Ran down dreams in my Chevy, with my girl by my side

And them Wilbury boys, now three of them have died

I’m singin’ now this is the end of the line.

The End of the Line.

Yes he did write “You Don’t Know How it Feels”

But tonight we do, and it’s just too real.

I have a Full Moon Fever.

Now, he wanted to be a rock ‘n roll star

Mudcrutch, and Heartbreakers, there you are.

And he danced with Mary Jane real slow.

Well, I know that you’re in love with him

I heard “Breakdown” in a dance at the gym

He taught me even when I lose…

Man, I dig his solo stuff, too.

I was a lonely teenager, heard “You Got Lucky”

I had glasses and braces, I felt sucky

Now I do again, because…

I started singing “Well she was an American Girl”

Then dove into a song about Learning to Fly

Them old Heartbreakers don’t have a dry eye

Singin’ this is now the day our music died.

Saw him on the cover of the Rolling Stone

Sunglasses, and cool as can be.

When I played his LP and an album by Queen

Wearing leather, a hat, and lookin’ so damn mean.

And a Dylanesque voice that makes you scream.

Oh, and while the King of Rock was lookin’ down

Him and Elvis now probably pal around.

Prince and Orbison have joined

And they’re jammin’, but we’re all burned.

And while Lennon sang with Chuck and Nelson Wilbury

The Million Dollar Quartet, came over to see

Maybe “Southern Accents” now, I will give a whirl

Wonderin’ which Wilbury will be next

Dylan and Jeff Lynne are the only two left.

McGuine knows that Tom was better.

They’ll all light up and smoke some grass

The players of his bands, the sadness will pass

Morrison on the side stage, it’s a gas.

Now the halftime show, we heard a Sweet song

Ballroom Blitz, why are our rock stars gone?

We want to get up and dance

This is an ECHO of the past.

The marching bands, and flag, but they just kneel

Do they recall the soldiers, veterans, and military…

And the many millions that have died?

The NFL players just sit, as the flag’s unfurled

Also think this is the day the music died.

At a festival in Vegas the fans died.

Oh, and there they were all in one place

Two of The Who, sang “My Generation” up in space

So come on, Happy Jack, don’t be Sad Jack so quick

Jumpin’ Jack Flash with Brian Jones, that will be a kick

Sympathy with the Devil, and Waiting on a Friend.

Oh, and we’ll think about John Bonham on that stage

Even though we still have his friend, Jimmy Page

No angels could really cop to it...

And as we cry, late into this Monday night

Rundgren will sing that he Saw the Light

On the day, the music died.

He’ll sing that with Orbison up there tonight

He’ll sing that with Orbison up there tonight.

He’ll meet a girl up there that sings the blues

Janis will ask him for some happy news

And she just smiled when he sang The Last DJ.

I’ll go down to that record store

So many out of business, they download music more

But the man with the vinyl let the music play.

And the Dancin’ in the Streets, just turned to screams

Don’t Do Me Like That, Petty now just in our dreams.

But now the words are all unspoken.

And the three men I admire most

Remember when Petty rocked the coast?

And we’ll be singing….

Or maybe we’ll sing “You Got Lucky.”

Yesterday, it was The Waiting, that worried me

Did the guy that took him from us have an extra 6?

the music still lives on!