So what is the most valuable and desirable single signed astronaut photo? Most people would probably assume it is a photo signed by Neil Armstrong. Armstrong unpersonalized white space suit portrait photos with a strong signature can fetch $5,000+. In a RR Auction Space Auction last fall, this Neil Armstrong signed photo closed at $14, 350. All that said, I will submit that the most valuable single signed astronaut photo is an unpersonalized white space suit photo signed by an astronaut many of you may not have heard of before - Jim Irwin.

Jim Irwin was the 8th man to walk on the moon with Apollo 15. He was a good signer prior to his untimely death in 1991. He signed many, many items and Irwin signatures can be had for as little as $30 - $50 on postal covers, cards, etc.

And what makes this so valuable is many space collectors try to collect the "set" of white space suit portraits. So you have many collectors competing for an extremely rare signed item, even if an Irwin signature itself is very common.

Perhaps the finest Jim Irwin signed white space suit photo in existence is currently featured in the RR Auction Fall Space Auction. Not only is it signed perfectly, it boasts an exceptional inscription, "Apollo 15 LMP, 8th moon walker, the chance of a lifetime." 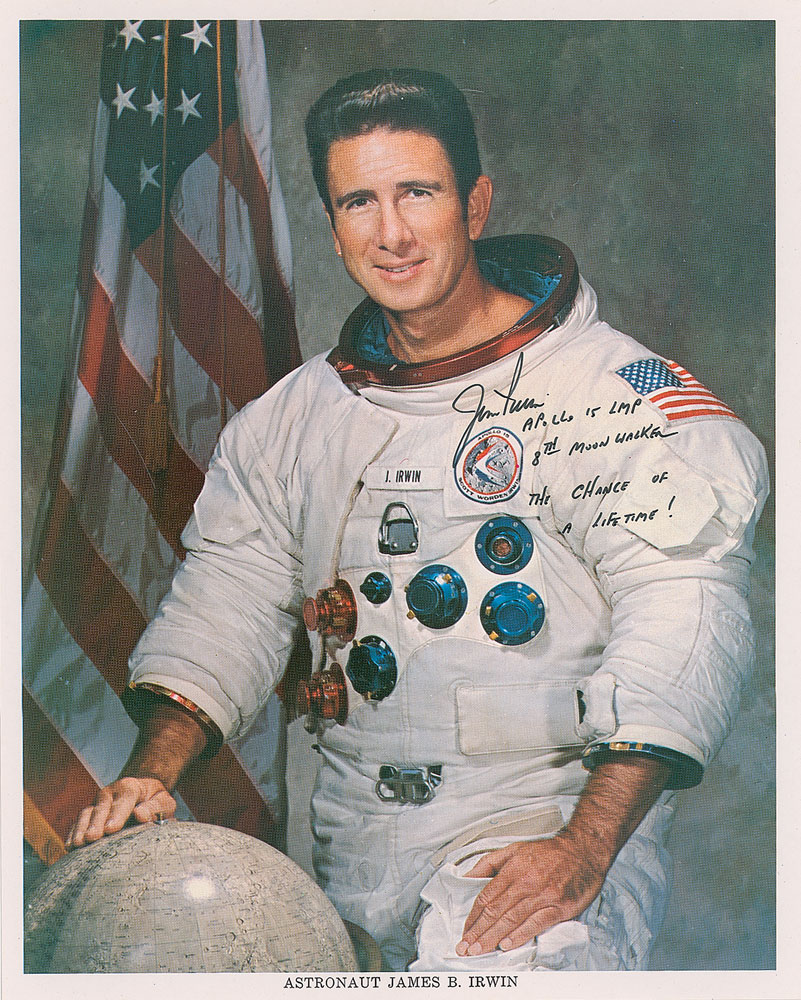 Interestingly, after I reviewed and approved this item and the auction preview went online, noted collector and dealer Ken Havekotte wrote on CollectSpace that he obtained this directly from Irwin when Irwin visited his Merritt Island, FL, home in July 1987. Havekotte went on to write he sold it many years ago, so apparently he is not the current consignor.

Here I am reviewing a stack of astronaut signed photos for the Fall 2013 RR Space Auction.

I see your point with collecting the white space suits. Other than that I would guess the mercury astronauts with Gus Griss. Neils   A looks a bit weird like stopping and starting.

Comment by Steve Zarelli on November 17, 2013 at 9:13am
Grissom is up there, but Ed White unpersonalized (and maybe a few others as well) is probably in front of Grissom. Regarding the A in Armstrong... There are no stops, but the top is often not perfectly curved and there are often angles in the top. This is typical and often seen on undoubtably authentic items such as Insurance Covers, personalized exemplars, etc. You can see an example or two of this in my Neil Armstrong Autograph Study: http://spaceloa.com/neil-armstrong-autograph-study/

Thanks, and thanks for posting astronaut stuff. I hope we turn things around and eventually try for mars. I cant stand the fact that we have to rely on Russian or "gulp" Chinese rockets to get us into space. Boy are we slipping.

The Jim Irwin signed NASA litho above hammered at $9,979.20 (with buyers premium).

Certainly a very healthy price, but I thought it might actually go higher.