The Nostalgia Convention 2013 with guests Julie Newmar,Ed Asner and much more!

Where else on Earth could you find a more classic and classy show featuring all together the likes of Ed Asner, Julie Newmar, Robert Loggia, Larry Storch, Johnny Crawaford, Elizabeth Shepherd, Jeff Connors, Diana Sowle, Conrad Brooks, Rusty Gilligan, and Margaret O’Brian? Plus some of the original Blob, a drive up of the Batcycle , the Batmobile and so much more from yesteryear!

You’d think you had a time machine attending the 2013 Mid Atlantic Nostalgia Con. The backbones of this incredible blast from our past and all in one show are Martin and Michelle Gramms.

Being able to shoot photos and interview this show’s celebrity guests is such a treat for me and an honor!  Plus I am lucky to get around the main areas and take photos of the guests, to photograph the diverse fans, dealers, operators, staff, security, and all who attend this fun filled Shangri-La! 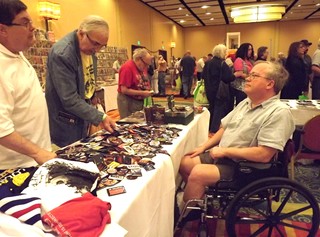 My friend Marty Kircher and I share a booth near the guest’s area This location allows me to be able to shoot photos of the great guest stars that round off a great convention , mingling and signing their own personally autographed item. Many of we fans bring something near and dear to us, a collectable perhaps, that we as collectors will cherish!  It is always an incredible thing for me to watch these iconic figures and all around good people that they are, interact with we fans. I get to snap some photos of people getting items signed and some of the conversations make for great photos and stories themselves….I see so much here, no wonder I have my 3D glasses! Huh….ha ha?

Each guest I chatted with and had the honor to interview, were fabulous sitting and conversing with me on camera, and I was lucky to be there and throw a few questions out and let them do their thing!!

All who attend this once in a lifetime, yet, once a year show get lost within it. You see a lot of items not usually at your average genre convention. This one is indeed unique. There are actors portraying Abbott and Costello walking around as they engage the fans with their famous Who’s on First skit, right there in front of you.

So many rare and classic items are found, bought, sold traded and always worth a great story behind them I myself have amassed so many collectables I have at home to show off and tell the tales of these items.

So, what do the guests themselves have to say about this convention? Alot.

Julie Newmar tells me that she loves this show, as she is able to really meet and chat with fans that wait to meet her and collect her hand signed autograph. Julie said she is amazed at what some of these people bring her to have signed. One guy brought a Batcave collectable that came out in 1966 to acquire Julie’s signature on. The gentlemen that own the reproductions of the Batcycle and Batmobile brought both to the show long enough for myself, and Nostalgia Con personnel to take Julie Newmar outside in front of the hotel for her to lend her signature on both! Julie told me she loved being able to sign the cycle and car. Yes, of course I wanted to drive that Batmobile at 140 MPH, around the area. I can fantasize at least. 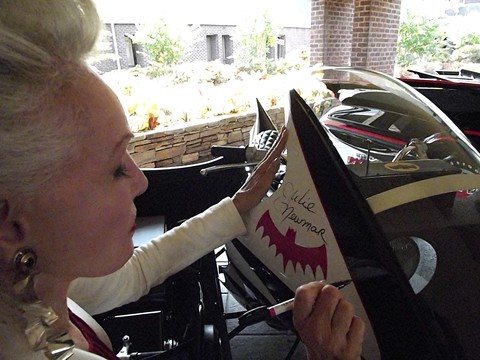 Julie also said to me in our interview that she loved the way fans remember her in so many roles and reminisce with her about them.

She tells me one of her favorite things about being Catwoman, was the costume. She could still fit into that I am sure. Julie’s favorite hobby when not working and meeting fans, is gardening. She said at one time her garden was voted the best in her California area.

Ed Asner was my second interview of the weekend and he was awesome. Ed loved teasing fans and hitting us with one liners when you least expected them. I actually helped Ed into the restroom a few times as it was easier for him to traverse the show in a wheelchair. I parked his wheelchair in front of the restroom and walked in with him to assist him if need be. I held his cane and when he walked over to wash his hands, the sensor on the sink would not work, so no water to wash his hands with. He went to three of them before the fourth one spayed out. Someone came walking in at that same time and yelled, “Hey, its Ed Asner, how you doing?” The guy put his hand out for Ed to shake, and Ed said in his gruff Lou Grant voice, “Whaddya thinkin, I got pee all over my hands buddy.” We all laughed. Ed was great with his fans and joked around a lot in his special vein of humor. 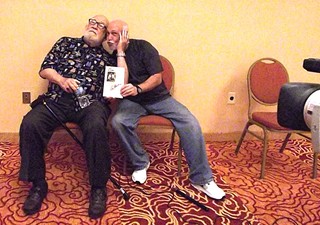 Robert Loggia drew a nice crowd and many mentioned his role in Independence Day and The Sopranos.

Johnny Crawford was great with his fans and had stories about being The Rifelman’s acting son who he portrayed.

Jeff Connors showed a few photos of his rather tall family, including his real life father Chuck Connors in many photos he shared with fans he had at his table. Jeff had a rifle with him that they really used in the series, The Rifleman! Incredible.

Elizabeth Sheppard told me how great it was to work with the late great Vincent Price and how awesome it was doing a film with her now well-known genre director, Roger Corman. She also enjoyed the role as the first, Ms. Emma Peel in the Avengers.

Diana Sowle told fun tid bits about being the mom in the 1971 film Willy Wonka. She really enjoyed meeting Ed Asner and Julie Newmar too. It is fun for me to witness and take a few photos of guests meeting some of the other guests! Very fun to see them get together for some chat time.

Margaret O’Brian got to sign some really rare collectables brought in by fans. She was thrilled to see some of these items, such as dolls, posters, one sheets and more.

Conrad Brooks always enjoys spinning his tales for listeners from some of the films he has done, such as the film voted the worst B film of all time, Plan 9 from Outer Space and more.

Larry Storch, being over 90 years old now, is just as fun, quick witted and humorous as ever. He is great interacting with his fan base at this show. He did some fun impressions and voices during his interview with me. He loved being there at Manc! This year Manc had the time traveling British phone booth known as, the Tardis from the series Doctor Who that people loved to see and get inside to have their photos taken. K9 was there as well. I am sure it is a well made huge prop, because I actually, myself, did not see anyone time traveling over the weekend. But you never know, this is a convention that does cater to the way back when lover.

As privileged as I am to be allowed to snap photos in the guest’s area and interview many of them, I am still just an immense fan myself!  It is thrilling to be behind the guests table snapping  photos of these stars chatting and sharing anecdotes of their various roles over time with fans. Watching my peers enjoying being in this hotel obtaining rare items from dealers, seeing a little of the g*** that was from the original film The Blob, hearing panels, watching films, and listening to some of the guest stars on stage sharing their stories to a crowded full room! It all adds to a wonderful time as always here. Even a local news crew covered this event talking with guests and fans, and they could not get over the feeling in the air shared while attending this particular convention!

So many other stories for me to share that were happening at this show, and maybe I will in another article.

Everyone is always smiling and having a blast every year here at The Mid Atlantic Nostalgia Con. The guest stars have told me after this show they had an incredible time! Plus Saturday evening Martin and Michelle hold a wondrous banquet for their guests and many many fans. What a grand way to end a fascinating and delightful time for this 3 day event! 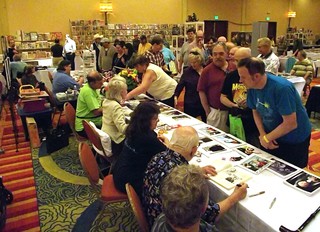 For me personally, it does take quite a while for me to come back to the here and now, and such is the reality of this post-convention. I am sure it is also the same for many of the guest stars and all those likeminded fans that come from all over to be a part of this show.

Plus, I am truly relieved that the portion of the real Blob that was on display over the weekend, never actually escaped to devour anyone or the entire hotel during this show! Ha ha. 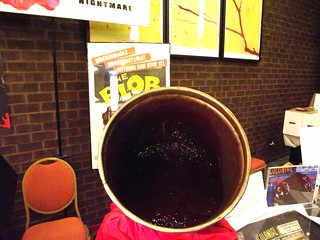 I'd like to thank Martin and Michelle Gramms, Marty, Anye, Karen, Beth, Jessica and so many more!

Hope to see all you regular and many newer Nostalgia Con visitors next year for another trip into the past for a fun filled and amazing 3 days at Manc! I will prep my time machine for it now. Remember to keep watching classic films and TV, and as was always said, please stand by and stay tuned for more. But first, these commercials. That’s all folks!

Thanks Mark, I always enjoy your adventures.... Someday, I hope our paths will cross at these conventions

cool as always mark! How much does julie newmar and some of the others charge know by the way?

Did the Blob sign autographs? That is a rare one.