Mark Gross' article on the Shore-Leave Convention 8/2013. Bill Shatner was there and more!!

Transporting into the Shore-Leave Convention 2013

The term Shore Leave, to many of us could mean taking some time away from your ship as it were. Or, it could mean the Star Trek episode of the same name. Or, it could mean you better prepare yourself for a thrilling adventure for 3 days within the area of Cockeysville, and Hunt Valley Maryland, Earth. August 2013, at the Shore-Leave convention.

Here you will transport in, with whatever means you specifically intend to enter the building you have at your disposal. I drove. Not my shuttlecraft this time but, my own car. So what if it has aliens and spaceships on the back window. I entered the building and stepped into another realm. It surrounded the place too. My video and still camera gear were on my shoulders as I gazed into the lobby walking in.

This hotel lobby was filled with aliens, Time Travelers, Storm Troopers, some androids, some Steampunk, blue people, exotic female’s in wondrous outfits, Starfleet, Stargate, a few creative and perplexing odds and ends, and others as well.

Welcome to Shore-Leave, the local Baltimore, Md. fan run sci-fi and genre convention is one of the best around! This was their 35th year! You can catch up with fellow fans and freinds; check out the dealers rooms, panel talks, art show, costume contest, and guest stars ready to sign for you, and so much more!

All guests charge a fee for signing and there is a fee if you desire to have yourself in the picture with any given guest at the official Photo-Op session, with a nice background and pose. You can do multiple guests in your photo op as well.

I enjoy covering these conventions, and Shore-Leave does support the Media quite well. My coverage is to obtain a one on one interview with the guests and snapping photos throughout the weekend. My photography and videographer who partnered up with me this year was Jessica Blitz. She is invaluable. Jessica will videotape my one on one interview with guests while simultaneously snapping still photos all the while.

This year, I was told that William Shatner and Brent Spiner did not wish to do any interviews. Bill Shatner was only there for one day, Saturday, and it was a sold out crowd! He did a stage talk and photo-op session, plus signed for fans.

I am not sure why Brent Spiner, (Data, from Star Trek Next Generation) refused. This is the third time I have seen Brent at various conventions within a few years, and he is a bit strange indeed. He has been an actor in many things and is quite good at acting too, however, the three times I have met him, he was quite bizarre. A few year ago I interviewed Denise Crosby and then hours later Terry Farrell at a show. Brent Spiner said no to an interview at this particular show, yet, when I sat with Denise Crosby, Brent walked over and sat behind us while I was video recording my interview with Denise. He said he just wanted to chat, and began chatting with Denise. Denise actually had to tell Brent she was in the middle of an interview with me. Very weird. Brent did the same thin when I interviewed Terry. Brent looked at me and into my video camera during Terry’s interview and said,oh, hello, and waved and smile then stepped out of camera range. So, yes, Brent Spiner is a bit strange.

Sometimes a guest star will sign the Shore-Leave program guide for free, but Brent asked $40 for anything he put his sharpie on. Still, I respect him and glad he made it to the show. I was always professional around him as I am with all guests! Even though Brent’s personality may need a positronic tuning, ha ha.

I did interview Greg Evigan and Amanda Tapping, and they were awesome. Plus Eddie McClintock and Julie Caitland Brown agreed to do an email interview with me soon. So, I may need to add those as an addendum to this article. Saul Rubinek said no too, but asked for my card when he was heading out on Sunday and told me he may do one via email. We shall see, I like to stay positive.

I was lucky enough to actually meet Bill Shatner, shake his hand and snap a brief photo with him backstage before he walked onstage for his talk and Q&A.

Mr. Shatner had his stage talk at 4pm on Saturday the 3rd. Security allowed me backstage because I told them I needed to snap some photos back there and when Bill Shatner went onstage. Only a handful of select humans were behind the stage before Bill got back there. When his manager brought him back, he met a few people while I snapped a few pics, and his manager motioned to me to put my camera down after a few minutes, and I obliged.

I did ask about getting a brief and rare one on one photo myself with Mr. Shatner, and Gary, Bill’s manager made it so. My partner Jessica snapped a quick pic and then Bill Shatner shook my hand, and walked up the steps to walk onstage. The photo does show me standing with Bill Shatner, but his expression was, "Ok, another photo op", but I understand, as his mind was focused on his stage talk about to ensue.

I moved to the side of the stage to take a few more photos of Bill Shatner talking to the crowd, and it was a full house indeed. The fans were ecstatic having the great Captain Kirk himself live and in person at Shore-Leave.

Sunday was the final day of the show and I was lucky to have Greg Evigan and then later, Amanda Tapping interview with me.

Greg tells me that while loving being an actor, he was originally music driven! He was in the play Jesus Christ Superstar and Grease. Greg says he loves coming out to conventions and meeting fans. In fact, before my interview, a lady handed him her phone to say hello to her mom on the other end. He says also that just this week of August 8, 2013, he is in a film called Invasion Roswell on Sci-Fi channel. That is tonight for me as I write this. Greg will continue to do conventions and is still producing, so keep your eyes out for upcoming things from him and his musical and acting oriented children. Great guy.

Amanda Tapping was by far one of the sweetest and kindest celebrities I have ever met. She tells me that she was one of thousands who auditioned for Stargate. Then before she knew it, it came down to three of them for her role. She says that the studio had the entire final cast in each of the major three roles, except Richard Dean Anderson who was already chosen to lead, in a room to all begin their final tryouts. And yes, she landed the job as Samantha Carter and was told she had two weeks to move from Toronto to Los Angeles. Amanda tells me she just finished 7 episodes for the show Supernatural; she directed one show of Continuum and has a few films upcoming. Amanda loves directing and acting equally as she has done both many times. She is working heavily in a charity called Sanctuary for Kids. 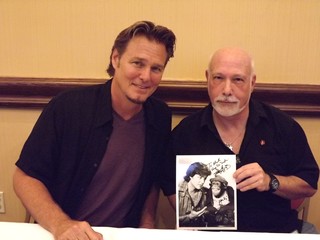 Shore-Leave is such a fan friendly show, where you see so many things going on in the hotel, as well as hang out with fellow genre buddies to share stories and show off autographed items together.

You can walk into an ongoing panel to listen and contribute your thoughts, plus gaze at the many fans in costume walking around the hotel. Not to mention finding some awesome items in the dealers room. This Convention also offers writing seminars with published authors, an art show, children’s programming, science guests, the Masquerade contest, and a party after hours in their Ten Forward Lounge. There is a room that screens some classic TV sci-fi too in case you need your daily dose.

There are huge telescopes outside to gaze at the Sun during the day and stars at night. Or, perhaps to catch a passing spacecraft or two. Maybe yours. Plus right before you enter the guest stars area, there was the Tardis photo booth, a life-size Dalek, and K9 all from the Doctor Who realm. I may have time traveled myself in there as many times as I shared the booth with friends snapping photos.

All around this convention it seems to buzz. Always something going on at any given time. Plus, just to be able to walk down the celebrity hallway and chat briefly with one of the guest stars while they are at their tables greeting and meeting fans is fun.

Everyone involved with STAT, (Star Trek Association of Towson), does a wonderful job in their specific expertise to put on such an awesome fan run convention!

I thank all the powers that be at STAT and Shore-Leave for allowing me press passes to cover this incredible event, or a weekend journey would sound more fitting. Thanks to you all.

It has been almost a week since the convention, and I, like others , still feel the fervor! I already miss the vibes and zeal of Shore-Leave!

If you were there, you know what I mean. If not, well, I do hope to see you all, humans, aliens and other beings attending next year.

Until then, prepare now for the ultimate in what the Shore-leave Convention will manifest and unveil to us in 2014. Hey, you time travelers just wait, no fair being conveyed into the future to be there right now. You people have to wait like the rest of us.

Until next time……..Beam me up!

awsome as always mark! You make it feel like we are there with you!

Robert- Thank you for your kind words. Much appreciated indeed.